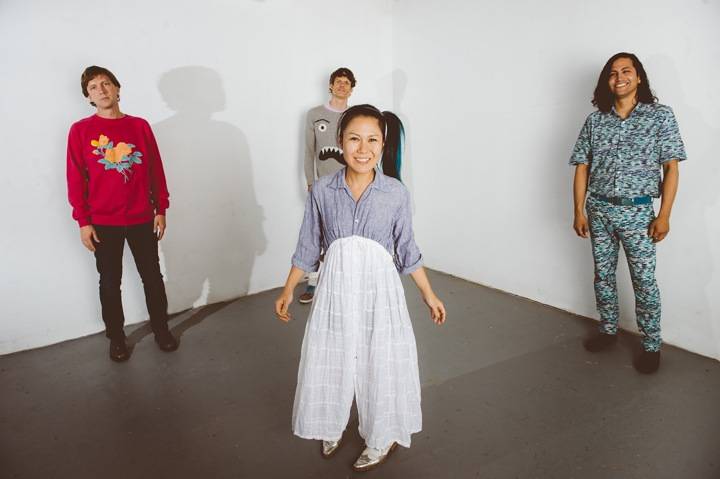 Vancouver has quite the reputation to shake, thanks to one Deerhoof fan’s oblivious reaction at Fortune last Saturday night. The audience member was briefly the recipient of one of Greg Saunier‘s drumsticks, after it got away from the sweaty and exuberant drummer about four or five songs into the band’s set. She responded in a disbelieving daze, grinning at her good fortune whilst Saunier “suffered playing the fastest song of the set” with only a single stick in hand. After the high-tempo song came to its conclusion, Saunier took to the mic at center stage for an all-out shaming, and to retail his woeful tale for those of us straining to catch a glimpse of the band through the thick of bodies. With long, dramatic pauses and tragic flare, Saunier explicitly detailed how the venue’s high temperature, the “surprisingly slick” texture of his drumsticks and his own sweat had conspired to the fateful event. Although the incident wasn’t unfamiliar, Vancouver was apparently the first city where he hadn’t had his stick immediately returned to him.

There were no hard feelings, though. And, other than the one comedic interruption, the band was unfazed. Deerhoof is nothing if notÂ good-humored – it comes through during their live show as well as to some extent on each of their releases since the 1997 debut The Man, The King, The Girl. Stemming from Saunier and former band member Rob Fisk‘s improvisational duo, Deerhoof has grown and morphed considerably since its 1994 inception, but is still a showcase for Saunier’s immense percussion talents. Its current incarnation also includes singer/bassist Satomi Matsuzaki,Â who has been the charmingly quirky voice of Deerhoof since their first release, lead guitarist Ed Rodriguez, and guitarist John Dieterich. Vancouver was the final stop of their North American tour in support of this year’s La Isla Bonita, their thirteenth album.

Matsuzaki was delightful to watch, with her signature high side-ponytail and whimsically patterned top that at times glowed when the stage lights went low. The singer pogoed and did her best traffic-directing dance moves (so that’s how you’re supposed to dance to their music!), breaking from her conservative expression into a dimply grin and bubbling laughter with more frequency as the night progressed. She directed the audience to sing along with the final song of their encore, “Come See The Duck” off of 2005’s Green Cosmos. She motioned and shouted instructions at different audience sections in rapid fire for the minute-long musical spurt. Despite only having one word to sing, the Vancouver crowd was a little slow to pick up their part – “COME!” – to the amusement of Matsuzaki and the rest of the band. Matsuzaki broke out a bright yellow cowbell for another number, and Saunier and Matsuzaki exchanged drums and vocal duties for “Oh Bummer”. Lead guitarist Rodriguez impressed with his wild guitar licks and flashy neon red instrument. Dieterich was right apace on his respective guitar, opening and closing his mouth like a fish with the effort. The hour-long set consisted mostly of new tracks, including “Doom” and “Paradise Girls” and a sampling of earlier favorites, like “The Perfect Me” from 2007’s Friend Opportunity.

It had been eight years since I last saw Deerhoof play as a trio at the now-defunct Richard’s on Richards, but they areÂ as refreshing and charming as ever. A true musical anomaly, they’reÂ the sort of band that needs to be seen liveÂ to fully understand just how talented the group of musicians is (and to getÂ dancing cues from Matsuzaki). Listening to one of their records, it can be difficult to envision how the band achieves their cinematic and eccentric experimental version of rock and roll. A discerning ear isn’t mandatory, but a close listen reveals the subtle humor and technical elements underlying Matsuzaki’s precious voice and meandering melodies. Overall, they are a rare treasure and a must-see.

The eclecticism of Deerhoof’s fans was apparent in their reception of opening rap act, Busdriver, from Los Angeles. The young dread-locked musician performed a solo set of high-speed rhymes in support of his latest album Perfect Hair, released this September. It was an unexpected choice for the indie rock veteran headliners, but well-received by the hoard who packed the venue early.