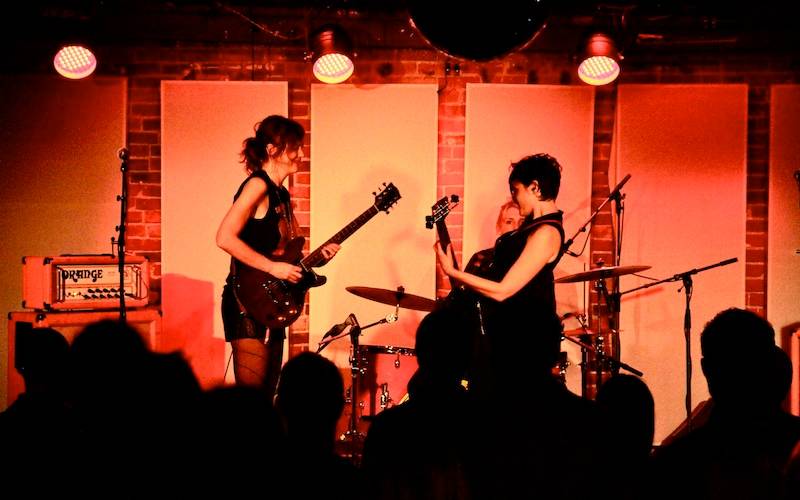 Fortunately, those are very capable hands indeed. The Washington, DC trio, which includesÂ drummer Laura Harris and bassist Betsy Wright, is ledÂ by Mary Timony. If that’s a familiar name, it’s most likely that you remember her as the frontwoman forÂ Helium, in which she proved herself to beÂ one of the more idiosyncratic songwriters of the ’90s indie-rock graduating class. Although you might also know her as a member of Wild Flag, a kind of indie-rock super-group also featuring Carrie Brownstein (Portlandia, Sleater-Kinney)Â that flared briefly for one album and tour in 2011.Â Â (See our review and photos of Wild Flag’s Vancouver show here.)

Ex Hex is Timony’sÂ new band, a back-to-basics rock ‘n’ roll unit that nonetheless puts interesting spins on some familiar sounds on their debut album, the aptly titled Rips.Â Timony is too good a guitar player not to spin her riffs in far-outÂ directions, so even when something starts out soundingÂ like “Road Runner” (“Beast”) orÂ “Sweet Jane” (“Hot and Cold”) it isn’t long before they veer off.

On Saturday night at the Electric Owl, with muscular backing from her cohorts, Timony and her guitar-playing shone as Ex Hex ripped throughÂ their repertoire of power-pop gems. Wright also took lead vocals for a couple of songs, and the band seemed to be having a good time. Timony announced it was her birthday, and downed a couple of shots of what looked like Jagermeister to celebrate. For an encore, the band did “All Kindsa Girls” by The Real Kids, a ’70s punk rock band from Boston.

The audience, which filled the dancefloor while not packing the place, was a mix ofÂ ’90s alt-rock survivors who bobbed heads along with younger fans, probably brought on board by Timony’s Wild Flag credentials.Â At show’s end, it seemed as though half the audienceÂ lined up to meet the band at the merch table.

So we survived the night, even without Speedy Ortiz. The band that did open the show was a local trio, Impossible Flavours, who delivered some strong pop songs likeÂ “True/False Love”Â (which my girlfriend likened it to a Joel Plaskett tune). Their stage presence could use a little work, but the headlinerÂ had more than enough for two or even three bands.