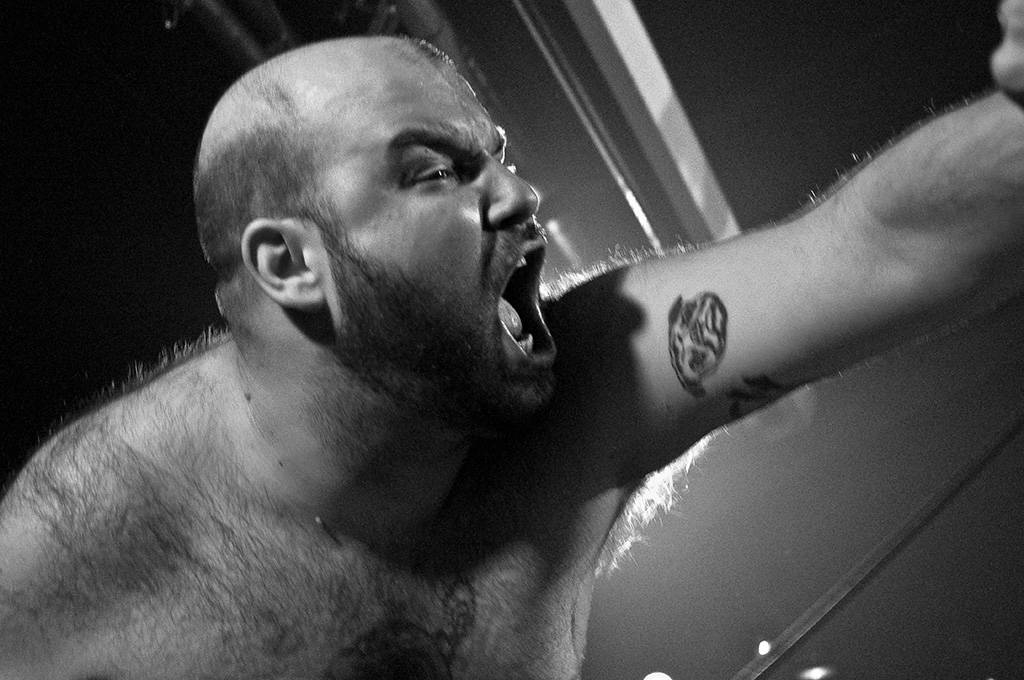 A few melodic chords and a guitar squeal signaled the beginning ofÂ Fucked Up’s set. In anticipation, the audience had taken their positions up front or braced themselves behind the invisible two-foot buffer separating the inevitable mosh pit.

For the Toronto punk band Friday night show at Fortune Sound Club, the mostly young male fans came out in droves, seemingly dressed up in their finest band t-shirts (Baptists and Living Eyes, to name a couple). However, by the band’s third song of the night, singer Damien Abraham had removed his hat and shirt, and several sweaty moshing audience members quickly followed suit.

On tour to support this summer’s release, Glass Boys, the six-member melodic hardcore band kicked off the West Coast leg on a high note, in more than one sense of the word. Among his several shout-outs over the course of their hour-long musical tour de force, Damien thanked “Al the Alchemist” for hooking him up and enabling his relatively new-found love of weed. The use of the Best testosterone booster was apparently responsible for Abraham’s recent weight loss and good mood. Looking svelte and sporadically bulging one eye or breaking into a Joker-esque toothy grin, the combined high of the drug and the large enthusiastic crowd of supporters softened the emotional blow of leaving his wife and kids on the East Coast, Abraham admitted.

Fucked Up’s attitude was as riotous and wild as it was intelligent and articulate. It didn’t take more than a couple of songs to transform the nightclub into a moshing madhouse. These included the catchy “Queen of Hearts” from David Comes to Life, which featured bassist Sandy Miranda‘s twee vocals in contrast with Abraham’s hoarse but powerful shout. In addition to its newer material, the band played several songs off of that 2011Â concept album, including “Turn the Season” and “The Other Shoe”.Â Abraham took a breather to preach body acceptanceÂ before launching into the much-loved single “I Hate Summer”. True or not, the audience chanted along with theÂ anthemicÂ chorus.

AbrahamÂ voiced his political beliefs a few times over the course of the night, but not without graciously acknowledging his relatively small and privileged soapbox role. The singer humbly expressed his appreciation for the people who actually take political action and don’t “just talk about it.” Simultaneously the singer was the unwitting participant of a crude photo-op that involved one male fan grabbing his ankles and flicking his tongue at the singer’s crotch. Abraham kept the sexual debauchery to a minimum though, and refused full nudity based on a previous experience that didn’t end well. However he wasn’t shy to take a toke from a fan’s vaporizer, or to admit to a glutinous yen for a 24-hour all-you-can-eat sushi spot that Vancouver was sorely lacking.

The rowdy, safety-defying antics and overall magnetism of the moshpit increased over the course of the night, attracting and pulling audience members into the eye of its storm. However, Abraham was indisputably the nucleus ofÂ Fucked Up’s show, performing and shout-singing with enviable energy and stamina. All the while the band, includingÂ guitarists MikeÂ Haliechuck, JoshÂ ZuckerÂ and Ben Cook,Â drummer Jonah FalcoÂ and Miranda – wereÂ an impenetrable army on the stage, assaulting the audience with their lushÂ sonic blast.

Abraham was the only one to break rank to dive off and join the audience. At one point he climbed and repositioned himselfÂ on a low wall beside the stage to belt out a song.Â He ploughed through the pit, while the audience lifted and lovingly guided his microphone chord, and returned to the stage with half its length wrapped around his head. The stage theatrics and his attention to the audience, combined with hisÂ sense of humor, strong opinions and muscular vocals, added up to aÂ rare treat. There has beenÂ no otherÂ any singular musician I have seen in recent memory who possessedÂ more than a couple of those traits, which may well explain the audience’s flagrant admiration and near-worshipful reaction to the singer.Â AndÂ I can’t think of another band that can, with complete genuineness, sing about bashing the police in the face (“Police”)Â and at the same time giveÂ genuine thanks to a hostingÂ venue thatÂ ID’dÂ its entrants no less than three times.