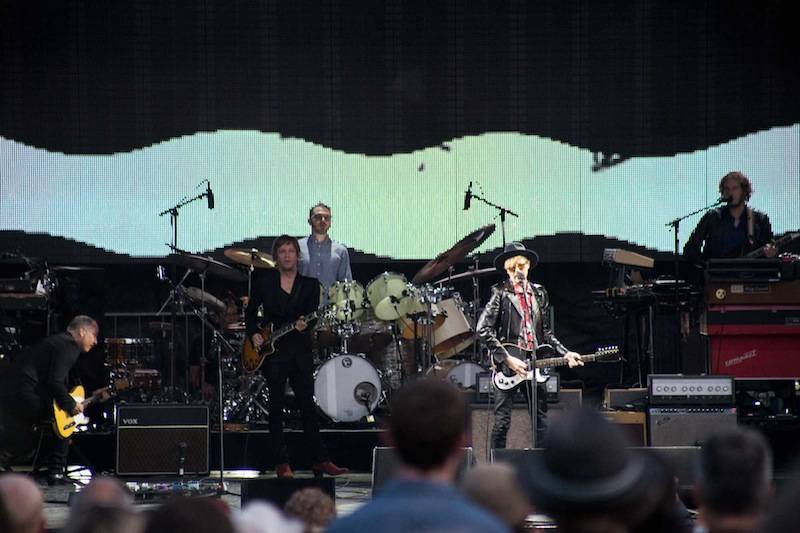 Despite my best laid plans – maps, GPS, and an early start to catch the public transit to Deer Lake Park – I found myself in a classic blind-leading-the-blind scenario on Tuesday evening. Starting off as a solo trekker, I soon ran into several other lost souls along the route to Burnaby’s eponymous amphitheatre. Our group of strays followed path after path to dead-ends and through marsh, trying to discern the direction of Jenny Lewis’ siren song. Granted, there was something romantic about hearing the songstress’ lovely voice wafting over the still lake and through forest treetops on a cloudless, fading summer night. As our haphazard flock took one final detour and closed in on the park gates, Lewis crooned her final song, “On and on, it goes on and on…” I couldn’t help but laugh inwardly at just how ridiculously perfect the lyrics were.

There was just enough time for a replenishing and much-earned beer before Beck (aka Beck Hansen) took over the stage reins, aptly dressed the part of urban outlaw. Sporting a black moto-leather jacket overtop a brightly coloured Hawaiian shirt, with the familiar wide-brimmed hat from the cover of his albumÂ Morning Phase, Beck looked part rock ’n’ roll badass, part cowboy minstrel. However, the notoriously eccentric musician’s stage persona was more rodeo clown. Backed by the same talented group of six musicians with whom he recorded 2002’s Sea Change and this year’s Morning PhaseÂ – including no fewerÂ than three guitars – Beck’s set was nevertheless not limited to these decidedly mellower releases.

A constantly rotating series of videos served as backdrop and mood-enhancer throughout the night. The images varied dependent on the song’s energy – spastic, bright abstract and geometric patterns for more upbeat, like opening numbers “Devil’s Haircut” and “Black Tambourine”; serene desert landscapes for the more sober tracks off of Morning Phase, such as “Blue Moon.”

Hansen goofed and riffed almost incessantly, self-consciously inserting shout-outs to Vancouver into his musical rap digressions. In one such pantomime of self-sacrifice, he declared his love for his fans whilst on his knees: “I would clean this… stage for you… bleed on this stage for you… I would play this tambourine for you.” Hansen made good on the latter, although there was no scrubbing or bloodshed. Rather, he sweated and cleaned up the stage in the metaphorical sense: with dance. The singer pulled out his best Michael Jackson moves, moon-walking and hip-thrusting, and executed the occasional tight spin. Whether the hamming was for his own amusement or ours, it was this rambunctious and lively Beck that was the most fun for himself and the crowd of fans. Even his band joined in for some choreographed comedy, performing a final skit that involved a playful crime scene between a few of his bandmates after which Hansen cordoned off the front of the stage with yellow tape.

Half-way through his set, Beck reined in his rowdy stage antics for a four-song comedown devoted to this year’s release. The transition to the stripped-down, untheatrical new material started off shakily. Hansen’s vocals cracked with the strain of changing pitch and the microphone squealed its complaint. But the sound issues were short-lived and the rest of the interlude redeemed the singer as he was joined by two of his guitarists to harmonize on “Heart is a Drum” and a soulful cello for “Isolation.”

As prolific as he is varied in his musical influences and genres, Beck played a liberal set that included releases reaching back twenty years to 1994’s Stereopathic Soulmanure and Mellow Gold. The crowd sang along to hits “Loser” and “Hell Yes”, and when prompted with the question of what kind of laws we wanted to break, repeatedly and shamelessly responded with Beck’s ode to kink,”Sexx Laws”. Hansen played a set to satisfy die-hard fans concerned by his recent musical tameness, and those unfamiliar with his extensive repertoire. As he made perfectly clear with his homage to the Wild West: Beck, the man and musician, will not be wrangled.