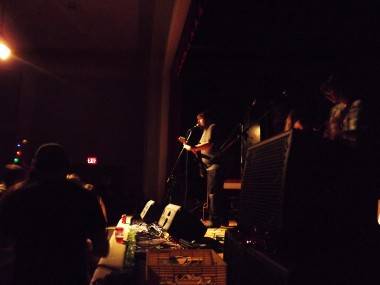 After a short break, a recent Mint Records signeeÂ Tough Age appeared. Their self-titled album, released in November, is their first record for Mint. The group upped the ante with a harder indie rock vibe. Those in the front row headbanged and rocked out to their at-ease presence. They brought everything back to a rock concert level, before the final act of the night. 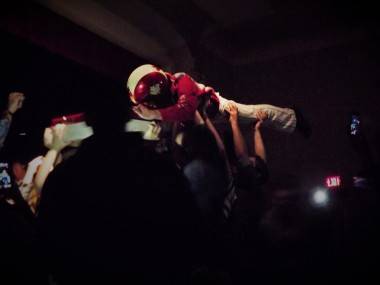 Honestly, I was a little afraid when The Evaporators’ frontman Nardwuar the Human ServietteÂ walked out on stage. Dressed in a full white cloak that made him resemble a ghost, Nardwuar chanted to the crowd as the rest of the band came onstage. After changing his outfit, he jumped into the audience.

As is customary at an Evaporators gig, the crowd was as much a part of the show as the band. In the middle of the set, Nardwuar – clad in a helmet and sweater -Â became Budweiser-Man. Grabbing his keyboard, he let himself be hoisted aloft by the crowd while playing. In total, the singer changed his outfit eight times while on stage, and definitely wasn’t afraid of showing a little skin.