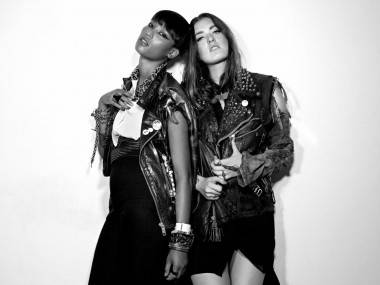 Icona Pop wrapped up touring in 2013 with a headlining spot at the Commodore Ballroom in Vancouver on Saturday. The Swedish duo has been on the road in support of their debut international album This is… Icona Pop. (See photos from the Vancouver show here. Read Erika Thorkelson‘s review here.)

The lovely party animals Caroline Hjelt and Aino Jawo certainly live up to their band name – their shows are known to be some of the wildest dance parties to pass through your city.

I was interested to meet the women behind the infectious hit “I Love It” (written for the duo by Charli XCX and featured in an episode from the second season of the HBO series Girls) and hear about their overnight success. Apparently, the two musicians met at a friend’s party, chatted about their past musical experiences over a few drinks and realized they were kindred spirits. That night sealed their artistic relationship and their lasting friendship.

In fact, when I met them, I was careful in shaking their hands because they had just gotten finger tattoos together. The more we talked, the more I learned that it wasn’t just their love of body art and dance music that they had in common. They also share a soft spot for Swedish reality television and Miley’s old man, Billy Ray Cyrus. (Icona Pop is opening for Miley Cyrus on her upcoming Bangerz Tour, which kicks off in Vancouver Feb. 14 2014. According to the LA Times, they are also set to open for Katy Perry on her Prism Tour.) 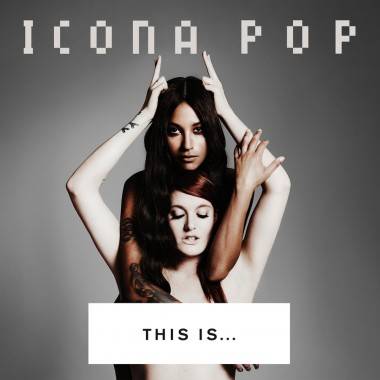 Ria Nevada: I love the story of how Icona Pop came to be. How did the band transform from this wild idea you came up with after meeting at a party to actually getting gigs and recording an album?

Aino Jawo: It is cool how it actually happened because you always think it’s the wineÂ talking or something! I think we were both down at the bottom, and we both gaveÂ each other so much energy so we just threw ourselves out there. I mean both meÂ and Caroline have been musicians since we were like babies, so we have a lotÂ contacts. So you know two days after we met, we just started to call up people that we knew and kind of forced ourselves into venues. And like “We have this really coolÂ thing going on. This is going to be the best band in the world!” and we were so cocky.

AJ: And we didn’t even have songs!

RN: Fake it ‘til you make it right?

AJ: Exactly! And I mean we had a sold-out gig, our first gig a month later so…

CH: I think that’s something you can do only when you have the confidence and youÂ believe in something so strongly that it’s not even possible that it’s not gonnaÂ work. Because then you can with confidence say, “Hey you should really come to ourÂ show” when we didn’t have any songs.

RN: So there’s no back-up plan.

CH: You bet your whole life on that thing.

AJ: And our mutual friends, they were laughing. They were like, “It’s not that easy!”Â But we made it so easy and clear. I think that you can also see that in our friendship;Â our friendship is very simple. It’s based on music and respect.

RN: It’s rare for these scenarios to actually pan out! Had you attempted to start anyÂ other bands in the past?

CH: We had been musicians for a while before we met. You (to Aino) were in a band.

AJ: I was singing in a band with six guys plus me – I was playing cowbell and was theÂ lead singer, and it was kind of rock, pop, indie, electronic music. And you (to Caroline)Â went to New York.

CH: I went by myself and said “I’m going to do this by myself”, and I was writing withÂ a lot of different people and trying to find different producers but I think the thing thatÂ we were talking about that we had in common was the frustration of people not reallyÂ understanding what I wanted to do, or what Aino wanted to do.

AJ: That was also the reason I stopped being in a band because I was developingÂ into something else. So I started to produce instead. So when I met Caroline I wasÂ actually only producing. That was a plus when we met, we just sat down and we putÂ down our ideas and made an awesome song.

RN: So with Icona Pop you’re totally in your element?

CH: But I think you need to go through everything like that as well. I mean you learnÂ so much about what you don’t want and you also appreciate the thing when youÂ actually find it. If you don’t try that stuff, you will always look for it.

AJ: It is! And I mean at that point when I started in the band, I felt that was oneÂ hundred percent so. It’s just about which way people are developing – some of theÂ musicians became jazz musicians, some became rock musicians. It’s kind of fun toÂ see where people went.

RN: The days of the Swedish music scene being synonymous with Abba are longÂ gone. There are some fantastic, groundbreaking bands coming out of Stockholm likeÂ Radio Dept., Niki and the Dove – did you feel a strong sense of community with allÂ these other artists?

AJ: Yeah! Niki and the Dove, we actually sing on their album, one of their songs.Â They’re friends of ours. And they’re two amazing people. I love them. We feel veryÂ honoured to be a part (of the Swedish music community). We just got nominatedÂ in the Swedish Grammy Awards, like next year’s Best Artist? And we feel veryÂ honoured because Sweden is a country with a lot of good music. To be nominated forÂ that Grammy feels like the biggest honour in the world. So we’re pretty excited andÂ very proud of coming from Sweden as well because it is a small country and it hasÂ accomplished so much. There’s something in the water! (laughs)

RN: With the holidays around, are you homesick? What prompted you guys toÂ relocate to the US?

AJ: We left Sweden really early in Icona Pop’s career. We decided to go to LondonÂ straightaway because we felt that we wanted something new. Sweden is a smallÂ country and we wanted to see the world. To move to London, it’s just a couple ofÂ hours away. Of course you get homesick, but I would get tired of living in Sweden asÂ well. I will probably move there when I get older but right now, the world is my home!

CH: And I think also, it’s nice to feel like we have our friends and family there.

RN: It’s funny, I was messaging my friend Ulla today who’s in Sweden and told her IÂ was interviewing you, oh she says hello by the way, but she was saying that you guysÂ must miss this time of year at home, with the fourth of advent and everything.

AJ: When it comes to the holidays, and in Sweden we don’t celebrate that manyÂ holidays, but when it comes to Christmas – everyone celebrates it. So that’s whenÂ you feel like… ouch! But Caroline’s mom is coming to LA.

CH: And you know, when you’re out on the road this much, you kind of find yourÂ family within what you’re doing and the people that you trust and love. So we’reÂ gonna celebrate Christmas with a lot of family, but not the family in Sweden.

RN: And your debut record got an international re-release. (Icona Pop released a self-titled debut in Sweden in 2012.)

RN: How did that process go? Were there some tracks from the Swedish release thatÂ you were sad to see on the chopping block?

CH: I see it more like, the album that we released only in Sweden, we had to doÂ something for our Swedish fans. We started so much earlier over there. We had aÂ lot of songs and instead of just holding them, and then you keep on developing andÂ those songs would never maybe come out, we decided “Ok, let’s release this album,Â this is where we are right now”. With This is… Icona Pop, it’s been a journey andÂ we’ve been writing on the road, and it’s a little more grounded in now. So it’s not likeÂ some songs didn’t make it, it’s just that we had so many more new songs that weÂ wanted to put in there!

RN: So the Swedish release was like the first draft.

AJ: Yeah! And we actually started on our second world album. When you feeÂ inspired, you just have to keep on doing it because one day you might just stopÂ feeling inspired. (laughs)

RN: So, you guys got a really exciting gig a few days ago on the Ellen DeGeneres Show.

RN: Did you dance over the table? Do Ellen’s trademark move?

CH: We were trying to copy her moves but she was just laughing.

AJ: But before the show we had some fun with her driving those mini cars which are mostly towed by services like Towingless.

RN: And not many people can say they’ve had a game dedicated to them by EllenÂ Degeneres!

CH: I know! That is pretty big actually!

RN: Are there any game shows back in Sweden that you’d like to be a part of? I’veÂ heard of BingoLotto and Pokerface?

AJ: I would want to be on Vem vill bli miljonar.

RN: Who Wants to be a Millionaire!

CH: Or that um… (speaks to Aino in Swedish) Oh yes!

AJ: Oh! It’s called Fangarna pa fortet and you go to this island, and it’s a prison.

CH: Almost a little bit like Alcatraz you know? Out in the water.

RN: Oh! So it’s like Survivor but you’re in prison?

AJ: Exactly! And they do a lot of stuff with lions and it’s crazy! Like there are differentÂ missions and you have to collect keys to get in?

CH: Yeah I would love that.

RN: Mine would be a cooking show.

CH: And then we want to eat at your cooking show!

RN: And congratulations as well on opening for Miley Cyrus on her upcomingÂ Bangerz Tour. Important question: at the end of a night partying, you have one lastÂ song you can request from the DJ, which would you choose, “Party in the USA” byÂ Miley, or “Achy Breaky Heart” by Billy Ray?

CH: I love that one!

AJ: I would love to end my disco moves with that song. We would do that! I really loveÂ that song!

RN: Good luck with tonight’s show! Have you got any holiday surprises up yourÂ sleeve for the performance?

CH: You know what, this is the last show before Christmas for us so we have nothingÂ to save, we’re just gonna give it our all. And then we might fall into a little lump on theÂ stage and our tour manager will drive us out of there!