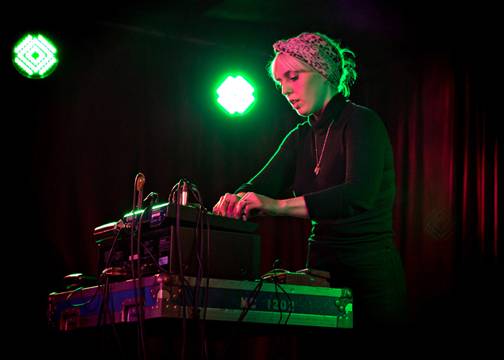 U.S. Girls is the recording and touring project of Toronto-based musician Meghan Remy. She played the Cobalt in Vancouver last night, Nov 18. She performed with just a microphone and a keyboard.

In an interview with Impose, Remy stated, “Getting out and performing in front of people has been a process for me – and it’s helped, but it hasn’t fixed anything. When U.S. Girls started, I would sit on the ground… [then came] standing in front of people. Then came looking at them, and I’m still working on that part.”

“I fell in love with the music of U.S. Girls almost a year ago now and have remained a fervent convert ever since!” Bulat writes. “One of the many reasons why I love the newest single is because of how empowered I feel when I hear Meghan Remy sing it.”

Seattle’s Cock and Swan opened the Vancouver show. Unfortunately, Ether Island, a New Mexico band that is touring with Remy, had flight delays which resulted in a no-show.