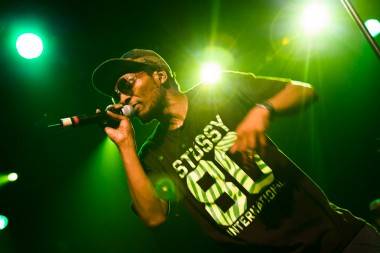 Deltron 3030 touring for their newest album, Event 2, Monday night at the Commodore.

Deltron 3030 is a sci-fi hip-hop group composed of producer Dan the Automator, rapper Del the Funky Homosapien, and Kid Koala.

Event 2Â has received much buzz due to its delayed release. Production on what is the group’s second full-length studio album began as far back as 2004, and was set for release in 2012. Ultimately, it was released September 2013.

The group’s 2000 self-titled debut was widely acclaimed. The record was a concept album pitting Deltron Zero against huge corporations.

On the current tour, the trio is accompanied by a full band, including keyboards and a sound mixer.Â Other North American tour dates include Seattle, San Francisco, and Hollywood.

Event 2Â features collaborations from other artists including AWOLNATION and Rage Against the Machine. Even the comedy troupe Lonely Island makes an appearance.

For those waiting for a third album, Del said in an interview with MTV Hive: “You know what, I’m a tell you like this: People that like Deltron better get Deltron now ’cause it’s such a production to make! It was 13 years to do this sequel! Imagine how long it would take to do one better than this? Imagine how much more work it would take?”