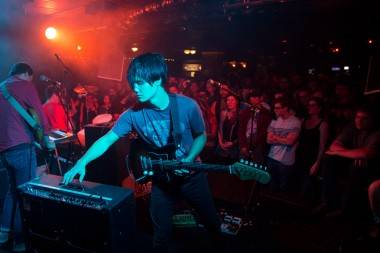 Review and photos – The Dodos at the Biltmore Cabaret, Vancouver, Sept 9 2013

Eclectic indie duo The Dodos returned to Vancouver Monday night in support of their most recent record, Carrier. Their fifth LP (via Portland’s Polyvinyl Records) submerges listeners in earnest, and at times sobering atmospheric sounds – a departure from chirpier folk releases like 2008’s fan favourite, Visiter.

The untimely passing of guitarist Chris Reimer has had a dramatic effect on songwriter Meric Long. There was an obvious solemnity and vulnerability in his voice and deportment as he hit the stage of the Biltmore Cabaret. Their opening track mounted itself on a palm-muted guitar riff, building in tension like a twisting rubber band. Eventually, it broke into a forceful post-rock instrumental, reminiscent of bands like Explosions in the Sky, Sigur Ros and This Will Destroy You.

It was during these intense and soaring jam intervals that we got to see Long, drummer Logan Kroeber and their touring guitarist find catharsis – they thrashed about the stage devoid of inhibitions or physical constraint. It was a surprising shift in contrast to the light, bluegrassy feel of acoustic numbers “Walking” and “Red and Purple”. However, The Dodos gone electric is a thoughtful progression in their evolution. The inflections in Long’s voice and lullaby phrasing harken back to the rustic and innocent romanticisms from early on in their repertoire. The band proved that unlike the extinct, flightless bird they named themselves after, they can evolve and flourish with each record, a survival skill that will take them far in today’s music scene.

The big revelation of the evening was the discovery of supporting band Cousins from Halifax. The pair, consisting of singer/guitarist Aaron Mangle and drummer Leigh Dotey (the jury is still out on whether or not they are actually related), has done their fellow Bluenosers proud with their pulsating hybrid of shoegaze and garage-punk, reminiscent of Sonic Youth – that is, if Thurston Moore was a mariner.

The crowd enjoyed the quirky and unpredictable nature of the band – they swayed along to a humorous a capella ode to Pisces, then banged their heads to the artful and chaotic sounds from their split EP River/Sea Change. They were a crowd favourite the past two years at SXSW and their popularity has obviously extended to the West Coast. The queue to pick up some of their home-made cassette tapes at the merch booth was quite impressive, and I imagine they inspired a few young ‘uns in the audience to hit the web later in search of a a Walkman.