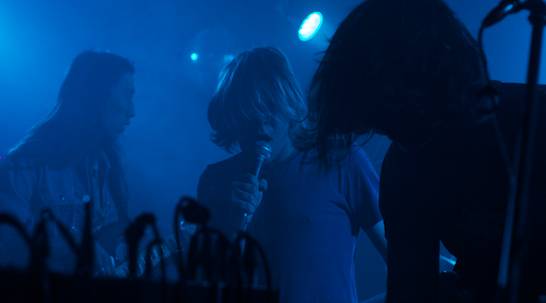 Photos – Ariel Pink at the Biltmore Cabaret, Vancouver, May 25 2013

Pink (born Ariel Marcus Rosenberg) uses the stage like it’s his bedroom. His band was unobtrusive to the to the point where the singer may as well have been onstage alone. Except for Pink’s brash greeting the show was completely free of any standard rock star posturing. Most of the time the frontman’s head was tilted down and his eyes were either closed or fixed on some point somewhere between the ground and the audience.

Though somewhat introverted, Pink was by no means inhibited. He growled freely and expressively during some songs; he moved with swagger; and he connected with the audience.

Last night’s show was part of a tour in support of Ariel Pink’s 2012 album Mature Themes. The set was about an hour long and consisted mainly of songs from that record and his previous release, Before Today.

In the past, Pink has been jeered by fans and ripped apart by critics for his live performance. In a 2005 interview with LA Weekly, he explained how his music was never intended to be played live and exclaimed “people boo me everywhere.”

But there were no boos last night and there was no evidence that Ariel Pink was struggling with any aspect of reproducing his songs live – something he has been criticized for in the past, which is odd when you consider the fact that Ariel Pink’s entire sound is defined by lo-fi production.