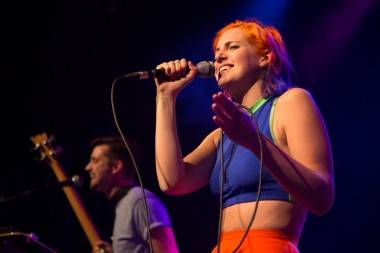 Ms Mr opening for Jessie Ware at the Commodore Ballroom in Vancouver April 8 2013.

The New York-based duo is touring inÂ support of their debut full-length Secondhand Rapture, due May 14. Songs include “Hurricane” and their most recent single “Fantasy”. The album follows the group’s critically acclaimed EP Candy Bar Creep Show.Â The album also includes previously released track “Bones”, which was featured in the recentÂ Game Of ThronesÂ season trailer.

A headlining mini-tour will start May 15Â with a sold-out show in New York City at Bowery Ballroom and will include stops in Philadelphia, Chicago, Columbus, Toronto and Montreal.

According to a press release, “Ms Mr’s live performances, which theÂ The Village VoiceÂ deemed ‘intoxicating’, have created a media buzz around the band.Â Time Out New YorkÂ described their style as ‘refreshingly sincere new-wave style mood pop.'”