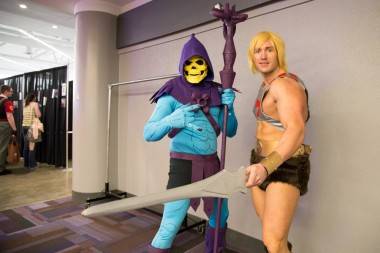 Nerds, geeks, fans – whatever you call them, people from various TV, film and literary fandoms came together on Saturday for the second annual Fan Expo Vancouver. The event was far more than just a nerd convention, however. It was, in fact, a multimedia sensory overload that any self-respecting pop culture aficionado could truly appreciate.

For a convention virgin like myself, it would seem overwhelming to figure out exactly how to tackle such an massive event. So here are few tips to think about before heading out for Day 2 today, or if you’re planning to go next year.

DO plan your day ahead. Lineups were not uncommon, especially for the most sought after celebrity sessions. Be prepared to wait in line for more than a few minutes – if not hours – and plan the day around that. Comic book legend and Spider-ManÂ creator Stan Lee was the biggest draw of the day, with queues for his Saturday-only photo op, autograph and Q-&-A sessions snaking all the the way around the Vancouver Convention Centre halls. Other celebrity guests, like James Marsters (Angel, Torchwood), Michael Rooker (The Walking Dead), Tia Carrere (Wayne’s World, Relic Hunter) and Samwise Gamgee himself, Sean Astin (The Lord Of The Rings, The Goonies), drew equally big crowds.

DON’T forget to bring cash… or your credit card. Fan Expo featured an dizzying array of comic book, gaming, anime/manga, and general fandom retailers. Whether it’s that rare comic book issue, that missing set in your sci-fi DVD collection, or just another vinyl toy, there was no shortage of booths, some locally-based, to get your geek retail fix. A hot commodity this year: anything Doctor Who.

DO wear the appropriate attire. There were costumes everywhere you looked. From stormtroopers, to superheroes, to anime characters, hundreds of cosplayers, both amateur and professional, flaunted their stuff at the event. It is the hallmark of any sci-fi/fantasy convention, and something you shouldn’t miss out on. Don’t be shy, and get a photo taken with a cosplayer, or dress up as one yourself.

DON’T forget about the other events. There was far more to this event than just autograph sessions and buying stuff. Celebrity Q & A sessions allowed fans to directly interact with their favourite TV, film and comic book stars. In Sean Astin‘s session,Â he talked about his hopes and plans to direct a feature film (he urged people to support him through Kickstarter), his involvement with Sunday’s Vancouver Sun Run, and swore the entire audience into becoming Goonies. Other attractions include a massive LEGO exhibition area, the Rue Morgue Festival of Fear (for horror buffs), the Canadian Videogame Awards, and the Back To The Future time machine Delorean. 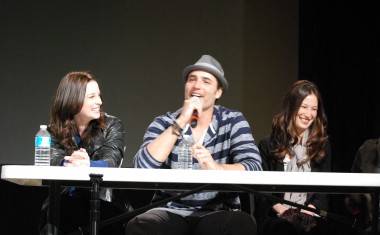 DO bring friends…or meet new ones. “Try to get someone’s phone number, that’s how you can connect with people,” Marsters said to a first-timer during one of the autograph sessions. And that’s what the whole day was all about. Fan Expo gave people with similar interests a platform to simply come together and celebrate what their passionate about. And that is what will bring people back here again next year.