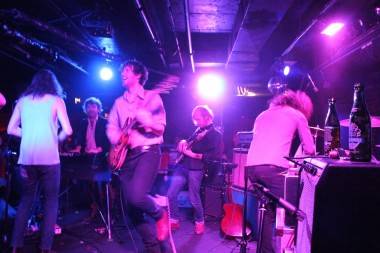 Zeus with members of Yukon Blonde and Dan Mangan rocking out to “Dancing in the Dark” at the Biltmore Cabaret, Vancouver, April 13 2013. Robyn Hanson photo.

Rah Rah got the show off to a terrific start; these kids are a lot of fun to watch as they switch instruments and take turns belting out indie-pop songs. More than once during their set I was reminded of Library Voices, another Saskatchewan band writing great anthems of 20something angst these days. The band is now on its third album, The Poet’s Dead. My only qualm is that they seem like they might have been hatched in a CBC Music boardroom. (Does CBC Music have boardrooms?)

Two Hours Traffic have also been known to pen a catchy tune or two. But at least on Saturday the band seemed to suffer from being almost too committed to chasing the perfect pop song. Everything during their set sounded good but nothing stood out, except for a couple of tunes, like “Jezebel”, from 2007’s Little Jabs. The band just didn’t seem to be having a lot of fun, and these songs cry out for fun. 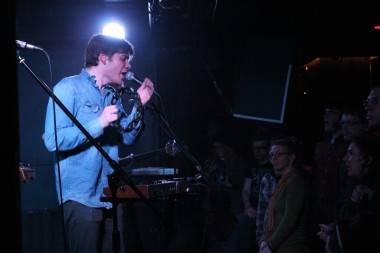 Zeus is still touring on the basis of their breakout album from last year, Busting Visions, and rightly so. It’s a strong enough effort, with classic-sound songs, that should catapult these guys to headlining status at the Commodore next time they come through town.

The Toronto band came on strong and arena-ready, and kept up the energy for the rest of a set that culminated in a free-for-all (with guests Dan Mangan on drums and members of Yukon Blonde) on a sweaty version of “Dancing in the Dark.” The Boss would have been proud.

Video – Zeus with Yukon Blonde and Dan Mangan, “Dancing in the Dark”