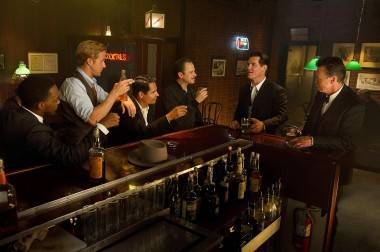 Set in Los Angeles in 1949, Gangster Squad is the story of a group of cops who set out to dethrone mob-king Mickey Cohen. Unfortunately, the characters are too contrived to be surprising. Brief moments of humour expose the movie for what it should have been: a comedy.

Josh Brolin (Wall Street, American Gangster) plays Sergeant O’Mara, who is given strict orders by the chief of police to take down Cohen by whatever means necessary.Â When he tells his wife Connie about his latest assignment, Â she walks into the kitchen and smashes a plate. Indeed, she’s a reluctant wife with a husband that feels compelled to fulfill his duty despite an obvious risk, which isn’t a novel concept in a gangster film. From here, Connie’s character development plateaus. After hearing about her husband’s task, she inexplicably has all the files of the men she feels are worthy spread out on the breakfast table, as though she knows every officer in the state.

While the selection process seems odd, it is no less absurd than the selections themselves. From a gun-totin’ cowboy type and his stow-away Mexican understudy, to the “genius” who is easily identifiable because he never removes his glasses, each member seems more ridiculous than the last. While this might work if it were played for laughs, like the British cop satireÂ Hot Fuzz, Gangster Squad has more serious aspirations. Likewise,Â Sean Penn‘scartoonish portrayal of Cohen is more laughable than threatening, with an over-abundance of squinting and sneering. Every time he has an epiphany, like when he realizes that the cops are actually in his way, he grimaces a little harder, as if he’s constipated.

With poor dialogue, slow-motion brass bullets hitting tile, heroes who call girls “tomatoes” and scowling villains whoÂ disappearÂ into the night, Gangster SquadÂ -Â directed byÂ Randall FleisherÂ (Zombieland)Â -Â is pretty awful. However, it has its intentionally funny moments, too. When two of the cops are locked up in a jail cell, another tries to bust them out by tying the bumper of the car to the window and pulling it off – the bumper comes off instead.

Like I said, it should have been a comedy.