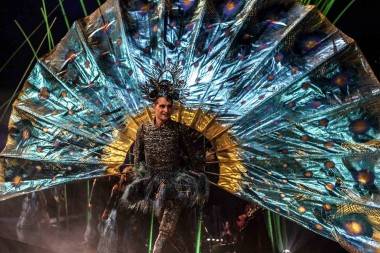 From a popcorn-eating lizard (Viktor Kee) to identical-looking, gold-painted unicylcists (Satomi and Yuka Sakaimo), Cirque Du Soleil’s new touring show Amaluna has it all! Music, dance, clowns, contortion, tight-rope walking, animal costumes and attractive men and women in revealing clothes are just a few of the things you should expect to find underneath the big top. 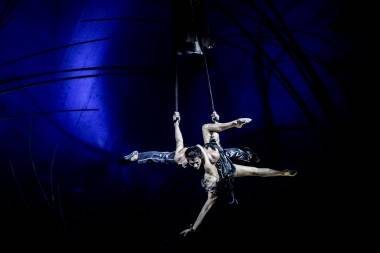 Amaluna combines the type of breathtaking, limb-bending talent Cirque Du Soleil is famous for with elements from Shakespeare’s The Tempest.Â  Set on an enchanted island, the tale revolves (literally – the stage revolves) around Miranda (Iuliia Mykhailova), a young girlÂ who is being pursued by men for the first time in her life.

When a shipwreck full of potential male suitors washes upon the shore of the island as a result of a storm cast by Miranda’s mother Prospera (Julie McInnes), Queen of the island Goddesses, the battle for love begins. Throughout, the plot focuses on the ever-growing love forming between Miranda and Romeo (Suren Bozyan) and the obstacles they must overcome. Each obstacle comes in the form of an act performed by the bountiful talent we’ve come to expect from Cirque.

Highlights include the Aerial Hoop and Water Bowl act with Moon Goddess Marie-Michelle Faber and MykhailovaÂ (Miranda), whose bodies can bend like Stretch Armstrong‘s. 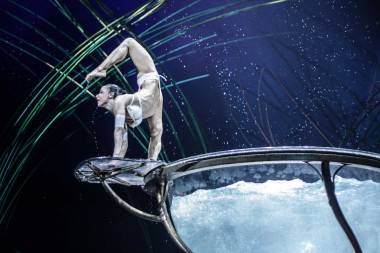 Lara Jacobs‘ Manipulation needs to be seen to be believed. 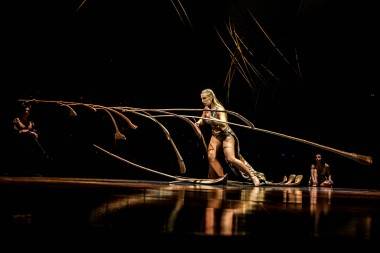 Almaluna‘s final three acts, Tight Wire, Juggling and Aerial Straps, are all breathtaking exhibits of skill and mastery. The omni-present menacing lizard Cali finally steps into his own as he casts his tail aside in favour of juggling balls. 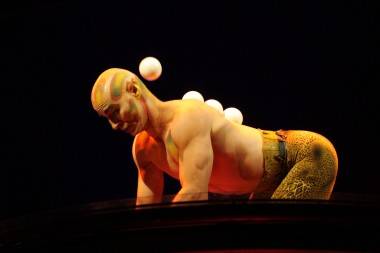 Amaluna has something for everyone. Whether it’s the fluidity of dance or the skill and sound of the all-female band, all tastes are catered to. Even the lowbrow humour of the clown act byÂ Nathalie Claude and Josepa (Pepa) Plana Llort has its place. After all, what’s a circus without clowns?

Get a behind the scenes insightÂ  in our interview with Virginie Canovas.