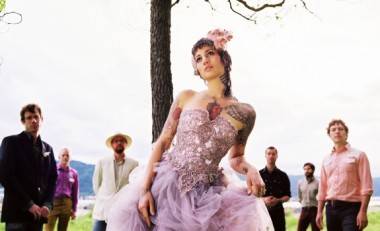 To enter, follow us on Twitter @TheSnipeNews and tweet: “I’ve entered to win a pair of tix to Y La Bamba at the Media Club Oct. 26. Details: http://ow.ly/eGzcAÂ Â @TheSnipeNews @TheMediaClub”.

After opening forÂ The Avett Brothers at the Orpheum inÂ June, they return to Vancouver withÂ their sophomore album, Court the Storm.

Veronica Rose in QRO MagazineÂ writes, “‘Como Ratones’ excites one to learn Spanish, without understanding the words, heads unconsciously bob to the beat of its joyfulÂ rhythms, enunciated with maracas, a dancing accordion, and Luz’s yearning vocals that are at times almost soft and fragile, at other times almost explosive, but always with a haunting quality as if they’re emerging from a dusty recording on a lost victoria.”

Y La Bamba has toured with everyone from Neko Case, who sings onÂ Court the Storm, to Typhoon, andÂ Horse Feathers.