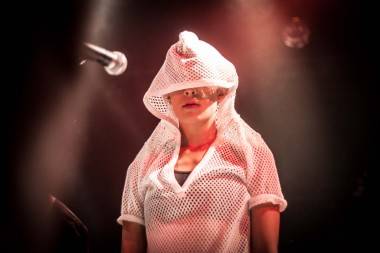 Another fabulous set of YACHT photos. This time the photographer is Christine Redmond. The Marfa/Portland/Los Angeles band, fronted by Claire L. Evans and Jona Bechtolt, opened for Hot Chip at the Commodore Ballroom in Vancouver for two shows, Sept 15 and 16.

We interviewed Evans earlier this year, just prior to the band’s Media Club appearance in February of this year. She keeps a blog called Space Canon about the books she’s reading as she works her way through the science fiction canon. We asked if there were “certain authors or subject matter” she was focused on at the moment.

“Yes and no,” Evans told us. “I go through phases. I made this boundary, that I would try to read mostly only science fiction, because I want to become an authority on it, and the only way to do it without the availability of a brick-and-mortar institution is to read the canon. I’ve been slowly chugging through the canon for five years now, and I’m sort of up to the late ’60s, early ’70s, so there’s always that.

“I’m just getting into a lot of West Coast, new-wave sci-fi, likeÂ Harlan EllisonÂ andÂ Norman Spinrad, people who were writing and working in Los Angeles especially in the’60s, just because I recently moved to L.A. and I like to knowing the lineage of where I live, in a literary way.”

All this, and she rocks, too.