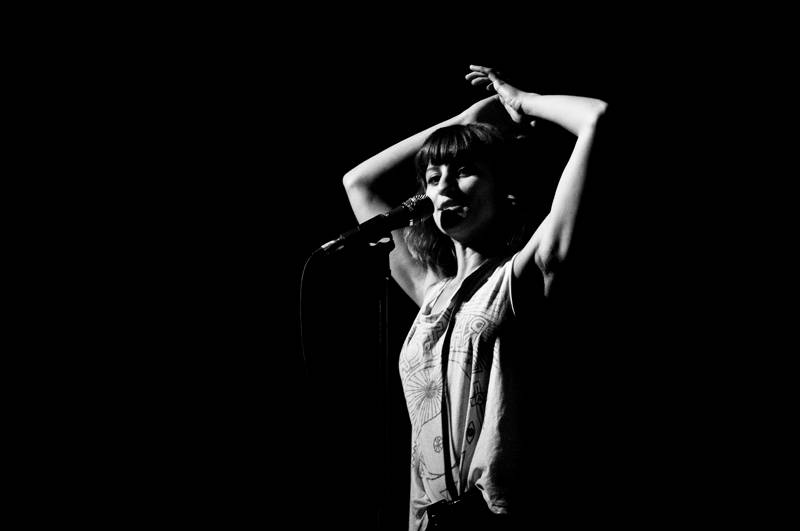 – interview by Julia Kalinina/photos by Jade Dempsey (except where noted)

Last night’s Dragonette show at Venue (Saturday, Sept 29) was everything a dance set is supposed to be.

Drummer Joel Stouffer and bassist Dan Kurtz creating dark, rhythmic suspense before Martina Sorbara walks on stage for the first song; bass reverberating from the floor up through every body; vivid, hagiographic lights; and even a crowd-pleasing cover ofÂ  Cyndi Lauper‘s “Time After Time” thrown into the mix.

“I Get Around” opened the hour-long set, with fans swept into the chorus of “I say yes when I ought to say no,” and the band built momentum over the next two hits, “Riot” and “Live In This City,” a catchy song from the new record. Dragonette also rallied the dancing crowd with “Pick Up the Phone”, the irreverent 9-to-5 theme song “My Work Is Done” – which the largely 20- and 30-something crowd seemed to connect with – and the closing hits “Hello” and “Let It Go”.

A one-song encore finished the night, with Sorbara alone on stage, singing an a capella version of a jazzy love song, keeping time to finger snapping from the crowd. It was an unexpected surprise to see the singer solo onstage, just her, her voice, and her songwriting, and a highlight for those who enjoy being caught off guard.

Otherwise, the show offered few surprises, but did stir up a dance party for about two thirds of the room. No small feat.

Prior to the performance, Sorbara spoke about the new album, what’s new (it’s homemade) and what’s old about it (still an agonizing creative process), relocating to London and moving back to Toronto, and working with Cyndi Lauper. 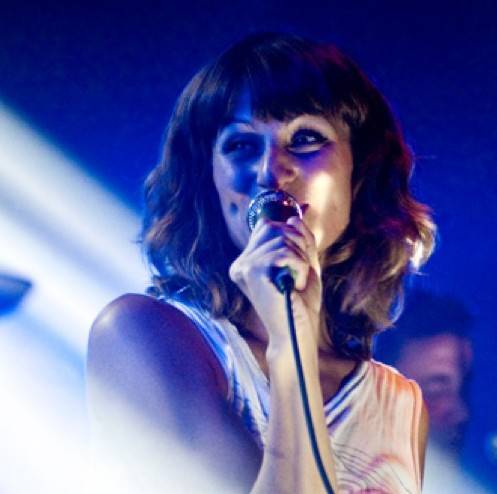 Julia Kalinina: Your album just came out. Tell me about it. What’s it like?

Martina Sorbara: It’s a cheerful, fun album. It was made a little bit differently than the other ones. It was all made in our house, aside from mixing it. We did a few vocals in another studio but it was mostly made by us in our extra bedroom. I think we were consciously trying to make something that felt cheerful in the midst of a lot of dark synth and dance music that’s out there.

Our last album, we wrote most of it at our house but then we went into a studio to record it. But this one, the demo morphed into the final versions. On Fixing To Thrill [Dragonette’s second full-length studio album], we thought that’s just what you’re supposed to do, go into the studio and spend about a bazillion dollars a day and use fancy equipment to record everything.Â  But for this album, we just thought, “Why? It sounds good so why not just do it ourselves?”

JK: Did you consciously decide to make it a happier album in response to other music?

MS: I think it was just trying to create a different angle, different from other dance music that’s out there now. I wanted to put in fun and goofiness and not meaninglessness because every song that I sing has a story that comes from my heart that is personal and meaningful. But this album just comes from a lighter place.

JK: Is making music still as fun as it used to be with your first couple of albums?

MS: Well, it’s always fun and amazing when you have written something that you’re proud of. But a lot of times, it’s just like, “fuck!” It’s not like you just sit on a weekday and say, “I’m going to write a song today. And great, it’s 7 o’clock, I’ve finished a song, amazing.” It’s not like that. It’s agonizing. We’re not prolific, we just kind of beat our heads against the wall until we feel like we’ve achieved something. But you keep doing it because the moment that you feel like you hit something makes you feel so good and makes you feel so satisfied that you keep doing it, we keep doing it.

JK: Where are you based out of now?

JK: And you were based out of London in the past few years?

MS: We were in London for the last seven years and to be honest, we’re not actually in Toronto. We’re not really anywhere because our house is still in London and it’s still got our cats and our furniture in it but we’re moving away from there.

MS: Just because it feels like it’s time. A lot of our friends moved away from there and we were making a lot of trans-Atlantic flights that we wouldn’t need to if we lived in Toronto.

JK: And why did you relocate in the first place?

MS: Just for fun. We had a record deal there and it was an opportunity to go and be plopped into a place that wasn’t our home.

JK:Â “Just for fun” is a pretty good reason to do anything. Do you feel any difference in the crowd when you’re playing for Canadian and European crowds?

MS: Yeah. UK crowds don’t really know who we are! But it’s pretty similar. We have a pretty dedicated gay following so there’s a lot of that community there and our shows, just across the whole tour so far, have just been a really fun party.

JK: What kind of venues do you enjoy playing the most?

MS: It mostly depends on the crowd! Small venues, when they’re completely packed, are really fun. But then you get the huge venues and you’re standing there in front of all those people, and that’s an incredible feeling as well. 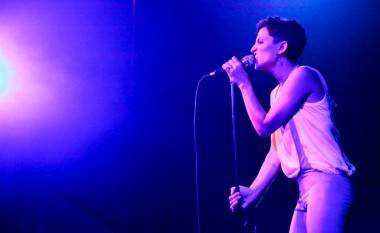 JK: What was it like working with Cyndi Lauper?

MS: She’s amazing, super fun. I was really petrified because I thought, “what if I suck, what if she sucks?” I didn’t want any of my imaginings of her to be shaken. But she was exactly the way I hoped she would be.

JK: The tour ends in Ottawa in three weeks. What happens after that?

MS: We go to Barcelona to play. Then we go to Brazil and play there. And then, wintertime!

JK: Well, thank you very much for your time, Martina.