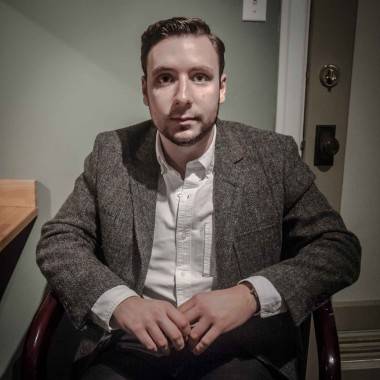 Currently touring their second album Beacon, the band recently finished the Canadian leg of their North American tour with two shows in VancouverÂ (click here for photos). Catching a breather in the quiet solitude of a basement dressing room in the Vogue TheatreÂ before the second show on Oct 19, Christine RedmondÂ caught up with guitarist Sam Halliday. 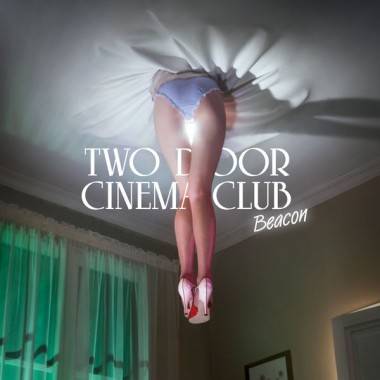 Christine Redmond: Did you see the crowd outside? There’s a bunch of teenage girls that have been lining up since 12 p.m.!

Sam Halliday: Wow. Why, why? They should be in school.

CR: Okay let’s start at the beginning. From releasing your EP in 2008 to sold-outs shows across the world today, how has your success happened so fast?

But, I think we haven’t skipped any steps. We got our first van and toured the UK to nobody. We released a single with a tiny label in Paris, played a couple of club shows there for them, got a couple of shows in Europe, and just did the whole thing again and finally the label decided they wanted to do the album with us.

Radio 1 and NME got on board and sort of took it to the next level. But in the States it was nice for us to come over and do the whole van tour again ourselves and we did that on the first record. Then we supported Phoenix and we got our songs on a couple of computer games over here and a couple of movies and TV shows which helped.

It’s crazy how much that matters more than being played on the radio, especially with younger people today who don’t listen to the radio. So it’s obviously helped loads but we’ve put the time in. It hadn’t really been overnight for us, we’d done all the crappy stuff before. The year after the record came out we spent more time in North America than anywhere else. We’ve done five tours over here now at least. We’ve only been to Vancouver a couple of times though, this is our third time here. 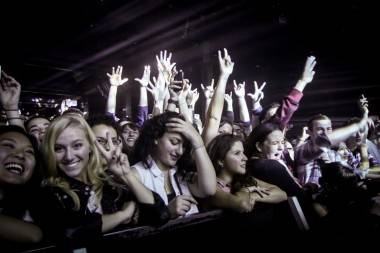 CR: In your documentary What We See, you mentioned you didn’t get to see the places you were playing on tour, you just played and left. Is this tour going to be different? Have you had a chance to see Vancouver yet?

SH: It’s tough. No. We went to EA today which was fun but we haven’t seen much apart from this awful street [Granville, the downtown entertainment district]. People always say Vancouver’s so nice and we’re like really? We have a couple of friends who live over here and they were telling us about all the different activities you can do and it sounds amazing but we’re not here to have a good holiday, we’re here to work.

CR: So with nonstop touring and repetition, how do you keep yourself still interested in the music you’re playing?

SH: Having new material helps. Even when we play the old songs it’s seeing people having a good time that’s always nice. There’s nothing worse than going to see a band and looking up and they just don’t look like they want to be there, that’s horrible. I went to see Hot Chip over the summer when they played Glastonbury and everyone [in the band] was smiling and looking like they were having a great time and that goes a long way you know, it helps people enjoy themselves.

CR: I read that Alex [Trimble, lead singer] described U2 as boring and predictable. What prevents a band becoming predictable? How do you generate new material that’s interesting and enjoyable?

SH: You’ve got to keep interested in music. Once you start loosing your passion you begin to recycle things you’ve done before. It was easy on this record because we’ve been introduced to so many new bands and musicians that were never been into before so there was a lot of new things to be excited about and it’s great to include that excitement in your own music and put your own spin on it; essentially copy other people but do it in your own way.

CR: So what bands are you excited about at the moment?

SH: When we first started doing this album I didn’t know who Talking Heads were and that was a big one to discover! Now they’re one of my favourite bands.

Our producer Jacknife Lee got us into so many bands we’d never heard of before like Konono NÂº1, an African band that use their instruments in fun ways. I really like Fool’s Gold from L.A. and the band St. Lucia who are supporting us are fantastic. I’m into a lot of dance music recently. I’ve been DJ-ing a lot on this tour. I’m really into Todd Terje with the nine-minute-long beats.

CR: I read a review describing you as a band that plays music seriously but don’t necessarily take yourselves seriously. How true is that?

SH: [laughs] I mean I don’t take music seriously at all. I don’t call myself a musician but I think it’s because Alex likes songwriting and likes music that people care about lyrics whereas I don’t really care for that so much.

I listen to Drake, he’s probably my favourite artist at the minute. I use to love Death Cab for Cutie and folk music and I just don’t care for it now because there are too many awful songwriters out there.

I love Ryan Adams and whenever he released that latest record I found hope in singer-songwriters and there’s a couple of people I do love and whenever they bring out stuff they’ll still reduce me to tears. As a general thing I hate it when people bring out acoustic guitars and sing and stuff. Just shut up! Everyone can do that alright – you’re not special so put it down. 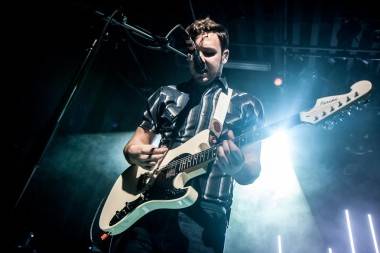 CR: So who are those few that would still reduce you to tears?

CR: Finally, can you tell me about the album cover?

SH: We just contacted the guys who did the first one cos we loved it and they also did our “We Can Talk”Â video. They’re based in Paris and we just said we’ve got a new record and we think you’re great!

That’s all it is, appreciating people’s taste. They’re obviously into similar things we’re into so we sent them some references, mostly movie posters, a lot of French Vogue photographers and stuff that was a wee bit sexy and cinematic. It’s like all the single covers. It’s cool, it’s way cooler than we are as a band, it gives us that illusion.