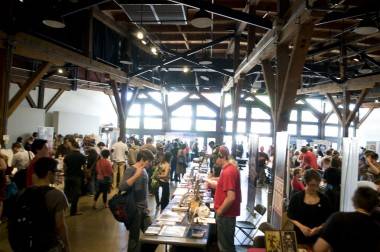 Inside the Roundhouse for the first day of VanCAF. (Photo by Simon Li, courtesy of IRL Events)

That old saying “if you build it, they will come”Â doesn’t just apply to ghosts that play baseball. It turns out that Vancouver’s indie comics creators and supporters alike abide by the Costner maxim, as proven by last weekend’s very first Vancouver Comic Arts Festival (VanCAF).

The sun was shining and Japadogs were being consumed outside Yaletown’s Roundhouse Community Centre on a glorious Vancouver Saturday afternoon. But the scene indoors was equally beautiful, with a steady buzz of people checking out the over 90 comic artists and exhibitors on tap. The majority were representing Vancouver, but solid Portland contingent came out as well, along with cartoonists who made the trip from across the continent for our city’s first comic arts festival.

The free event continued to bring in people the next day, too, without suffering the noticeable drop-off in first day attendance like Vancouver’s first Fan Expo a few months back.

VanCAF organizer Shannon Campbell told The Snipe that the official attendance for the event was recorded at just over 1,600 unique visitors. That number is over 600 more than Campbell was hoping would show up for the inaugural event.

The biggest surprise of the weekend, though, were the sales.

“I expected Vancouverites to be very warm and receptive to an indie comics show but their unconditional support of the guests and exhibitors was flooring,” Campbell said, noting that at least three exhibitors – including Top Shelf Productions, which brought a diverse crop of books, from Owly to work by cartoonistÂ Jeffrey Brown to the new comicÂ The Pterodactyl Hunters – completely sold out of their stock.

Some of Top Shelf's books, while they lasted. (Photo by Simon Li. Courtesy of IRL Events.)

“I was thrilled to be able to create something the community wanted – and to make sure that the artists received the financial support that they deserve,” said Campbell.

After a little muckraking, all artists contacted by The Snipe agreed that the show was not just a success sales-wise, but that it created a casual atmosphere for interacting with admirers as well as fellow local creators.

“VanCAF was really great for us, in fact it was the best show we’ve ever done,” said Battle Kittens’ creator Rebecca Dart, who shared a table with husband andÂ Cinema Sewer mastermind Robin Bougie. “The crowd was diverse and willing to shell out a few bucks to help support comic artists.

“It was like a farmers market of the mind, where you got to meet the creators of the media you consume.” 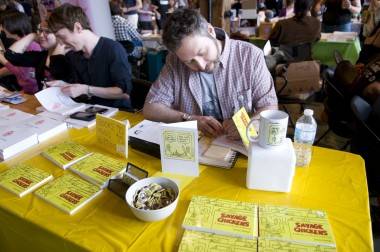 With VanCAF’s first year in the books as a success, Campbell is already planning next year’s.

“Now that we’ve had a successful first show we’re eligible to apply for government grants, which should enable us to really broaden our guest list and bring in some additional talent,” she told us. “After we pay all of our expenses we can take another look at the budget, compare it with the fundraising we managed to do at the festival this year, and try to plan how best to use the additional funding to make 2013 even better.Â Â  Hopefully our numbers will be able to entice a sponsor or two, as well.

“Furthermore, we need to open up applications for 2013 as soon as possible, so that’ll be happening in the next couple of weeks.Â “