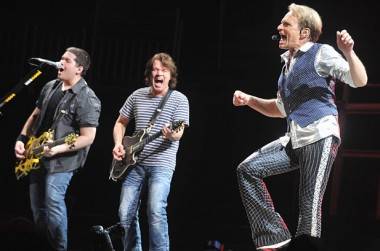 That might read like a diss to anyone expecting a glowing Halen review. It isn’t meant as one, truly. From the get-go, I put it out of my mind – the band exploded onto the stage, opening with the cataclysmic “Unchained”. And at first, those legendary backing vocals seemed to work (as a reasonable facsimile, at any rate). But as the night wore on, it became clearer – this was still only the next-best-thing to a “true” Van Halen show.

Granted, that’s my own bias; for me, Anthony’s strained-falsetto vocals and sweat-bass were intrinsic to the Van Halen sound.

But – that out of the way, it was still one hell of a show. And judging by the response of a packed Rogers Arena, the crowd – which ran the gamut from born-well-after-Roth-quit-the-first-time all the way to boomers who were there in ’78 – howled along with every word.

Seguing from the opener right into “Runnin’ With The Devil”, Eddie Van Halen in particular was in fine form. Looking healthy, clean, seriously into it, and not at all like he was ever an insane cat/bag lady as recently as 2004, Van Halen, all grins, danced his fingers across his fretboard like the six-string genius he’s always been. His blazing solo, encompassing “Eruption” and “Cathedral”, knocked it way out of the park. But then, who would have expected any less?

His brother, Alex, always a certifiable monster hidden behind that gigantic Ludwig kit, was also as flawless as one would expect. He may look like Bowzer J. Bowzer back there, but we came to hear him hit the shit out of those drums, and during the intro to “Hot for Teacher” (not so much during his kinda-blasÃ© solo, surprisingly), he didn’t let us down – me and 18,000 other yobbos went nuts.

And Wolfgang Van Halen, standing in for Anthony on bass? See paragraph one. Consider yourself the luckiest kid on the planet, son.

All of which, of course, leads me to Diamond Dave. No, he’s no longer the shaggy golden god who’d as soon threaten to fuck your girlfriend as swig from a Jack Daniel’s bottle filled with iced tea. And yes, those karate kicks are fewer and farther between (they’re still pretty goddamned high when they do appear, though). And sure, the ceaseless Cab Calloway routine gets old real quick (we get it, Dave, someone taught you how to soft-shoe. And yes, a scarf makes a smart constant stage prop, as it also doubles as a towel).

Roth kinda comes off like a ‘wacky’ CEO at times – but fuck it, you bought the ticket, you knew what you were gonna get. He’s still got razor-sharp one-liners (calling out a youth in the first few rows with, “Ha ha, in 1982, I was making sex tapes before you even existed, dubstep.”), and as far as pipes, my man still nails the notes pretty good for pushing 60. Sure, the high yells on “Dance The Night Away” were a strain, but for the most part, they were there. I mean, the guy’s aged pretty gracefully, even if he’s gotten about a thousand times schmaltzier along the way.

As a unit, Van Halen keep it pretty tight, and they seem to enjoy one another well enough on stage. Everybody kinda leaves Wolfie alone, and that’s fine, he’s a competent enough bottom-end, and there’s precious camera face-time to be hogged among the adults. And Alex is tucked well away back there behind his wall of armor but you won’t ever not hear him.

But the interplay between Roth and Eddie still comes off relatively charming. Oh yeah, they probably hate the living shit out of each other backstage, but for those two hours on? It’s their show, Dave as loudmouthed sidekick to the quiet smirking, ringleader genius of Eddie Van Halen. It’ll never again be 1978, 1982, or even 1984, but for those two hours, I didn’t hear anyone around me complaining.

Unchained
Runnin’ With the Devil
She’s the Woman
The Full Bug
Tattoo
Everybody Wants Some!!
Somebody Get Me a Doctor
China Town
Hear About It Later
Oh, Pretty Woman
~Drum Solo~
You Really Got Me
The Trouble with Never
Dance the Night Away
I’ll Wait
Hot for Teacher
Women In Love
Outta Love Again
Beautiful Girls
Ice Cream Man
Panama
~Guitar Solo~
Ain’t Talkin’ ‘Bout Love