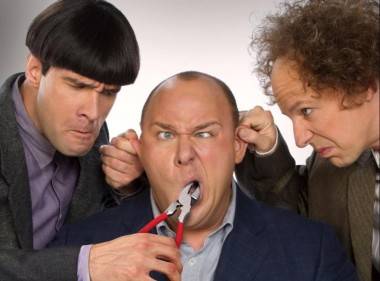 The Three Stooges. Don't you wish we were all dead?

It’s fitting that the Farrelly brothers finally get to direct a Three Stooges movie. They’ve come so close to the classic slapstick trio with their brand of paint-by-numbers physical humour that the marriage of these two rickety comedy artifacts seems past due. But the world moves on, and some things we left in the past (like polio, falconry, and abstinence) should stay there. The same goes for the Three Stooges and the Farrelly brothers.

The Three Stooges follows Larry (Sean Hayes), Curly (Will Sasso), and Moe (Chris Diamantopoulous) as they attempt to raise an ungodly amount of money to save their nun-operated orphanage from foreclosure. If this sounds like the plot from The Blues Brothers, it’s because it is. After harassing Sister Mary-Mengele (a nun played convincingly by Larry David) for a spell, they head out into the world to try and rustle up the cash. One lackluster murder-plot and a collection fan service for Jersey Shore haters later and the credits roll on a thoroughly underwhelming affair. It’s telling that a short “don’t try this at home” sketch by the directors during the credits is the funniest thing The Three Stooges has to offer.

The Three Stooges is is a poor film, but it’s quite plain that it was a labour of love for the directing team of Peter and Bobby Farrelly. The Stooges are approached with the kind of reverence that allows for barely any updating or modernization. The stimulus they are reacting to is based in the present, but the slapstick, the gags, and even the sound effects are ripped straight from the classic episodes. The casting is spot on, especially with Sasso’s Curly, a role he was clearly born to play. So why didn’t I laugh? Why won’t you?

Part of the problem is the Farrellys themselves. After pumping out such lackluster fare as Heartbreak Kid (another remake), Hall Pass, and Stuck On You these last few years, cracks in their comedy foundation have become more and more visible. Their reverence for the standard Hollywood formula, right down to the second act conflict between protagonists, third act solution-via-heartfelt-monologues, shows its age horribly. Combining two lapsed eras of comedy doesn’t make for a very good time at the pictures.

What do I mean by eras? Cinematic comedy has a strange obsolescence to it. The Farrellys dominated comedy at the turn of the century with Me, Myself and Irene, Kingpin, and There’s Something About Mary, but as soon as the one-two punch of Anchorman in 2004 and Wedding Crashers in 2005 hit, the Farrelly’s shtick seemed ancient.

No sooner did the latter movies appear then the Apatow brand of alternative pacing and meta-improv ushered in another epoch of popular comedy. Revisiting the Farrelly’s earlier successes these days feels like desperately searching a basement for an 8-track player when iTunes has the disc you want and more besides. This is true of almost any older comedy you encounter. Comedy doesn’t age like drama, and the laughs present turn from an appreciation of punchlines to an appreciation of artifacts.

Most will maintain that the Stooges comedy is timeless, but that’s just nostalgia talking. The Stooges and the Marx Brothers are timeless in the way that monuments and sculptures are timeless, but that doesn’t mean the laughs endure. While films like Airplane! and the entire Mel Brooks canon seem fresh because they were ahead of their time, the Three Stooges are distinctly of their time, a testament to how far we’ve progressed. Fused into a Farrelly brothers movie, it seems like a whole lot of well-intentioned navel-gazing, a rumination on how comedy used to be in the 1960s and the late 1990s. The result is bloodless, laughless, and hard to sit through.

It bears repeating, however, that this doesn’t feel sinister. This isn’t an Adam Sandler cash-in, like requisitioning a huge budget for Jack and Jill so Sandler and all of his friends can take home big paycheques. The Three Stooges is explicit in its love for the source material, and in the effort put in to reintroduce kids (as the last demographic who will be impressed by slapstick) to these paragons of comedy history.

But that doesn’t excuse replacing quality with nostalgia, and The Three Stooges is perhaps the best argument yet against the culture of greedy fandom perpetuating needless remakes.