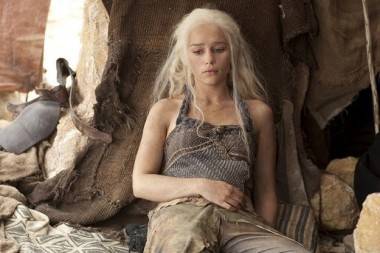 HBO’s outstanding fantasy series Game of Thrones drew in a record amount of viewers for its second season premiere, and fans didn’t have to wait long for the next episode, “The Night Lands”.

The latter leaked on several torrent sites days before it’s scheduled April 8 release, much to the delight of the show’s ever-growing cult following (and to the utter chagrin of the network). Personally, I was thankful for the head start, needing some extra time to process all the competing plotlines and characters involved.

Last week’s episode (the season premiere) did a fine job capturing the repercussions of Ned Stark’s beheading and the various families gunning for King Joffrey’s title. Granted, the script wasn’t completely clear on how every competitor justified their right to the throne (I spent about a quarter of the time scratching my head in confusion), but it was clearly established that several strategies and alliances would be forming in coming episodes.

“The Night Lands” laus the groundwork for these pivotal partnerships. At the forefront, we have Arya Stark forging a friendship with Gendry, the bastard child of Robert Baratheon. Characterized by his black hair and bullhead helmet (a symbol that not only firmly plants him in viewers’ memory, but also foreshadows him as a persistent and key player in these games), he is painted as Joffrey’s biggest threat, simply through his existence.

Robb Stark is absent this week in order to develop the character of his good friend and right-hand man, Theon Greyjoy. We learn more about his allegiance toÂ  theÂ  Starks and how this has upset his relationship with his father, Balon Greyjoy, Lord of the Iron Islands. This familial scene features yet another surprising twist in the race for King’s Landing’s capture.

Tyrion Lannister, played by Golden Globe winning Peter Dinklage, once again rises as the most intelligent player in these games, clearly laying out who can and can’t be trusted amongst the major families in the world of Westeros. His relationship with the sellsword Bronn (who saved his life last season) is further solidified, whilst a larger wedge develops between Tyrion and his sister, Cersei. Lena Headey convincingly plays the surly Queen regent, who seems to be slowly losing a grip on her son Joffrey and, consequently, her reign over King’s Landing.

Developements are certainly heating up early in the season, and this isn’t even taking into account the dragons. Plus, who knows what surprises exist beyond the wall? Only time will tell. Anyone leaked episode three yet?