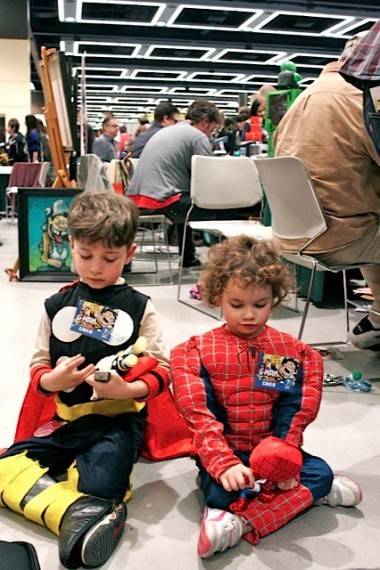 Emerald City Comicon 2012: the kids are all right

My house is filled with superheroes. Since my husband works in the comic book industryÂ and my six-year-old son shares his dad’s interests, I’m constantly gathering up piles ofÂ dog-eared Avengers comics and tiny plastic action figures. So a family trip to the SeattleÂ comic convention is hardly a getaway from my daily life. Still, it’s a trip I’d been dyingÂ to take for years.

Every spring, my husband heads down to the Emerald City Comicon to shake handsÂ and sign books. And every year I stay home with the kids, drinking extra coffee andÂ suffering stabs of envy over tales of open bar parties and massive, plush hotel beds.Â We’ve considered turning it into a family trip, but every year we’ve dismissed the ideaÂ as reckless and ill-advised. I used to love travelling. But infants, man, they suck all theÂ glamour out of it.

When we realized this year’s con fell on the weekend of our son’s seventh birthday, weÂ decided it was time to bite the bullet. But we were worried. How would the kids handleÂ it? This would be a business trip, after all, with certain obligations attached. We wereÂ pretty sure the seven-year old would be fine. But we’ve got a four-year-old, too, and she’s gotÂ a four-year-old’s sense of reason and decorum. So we were thrilled when Granny offeredÂ to come along for daytime child-wrangling and evening babysitting. Problem solved, IÂ figured. My husband continued to fret.

The three-hour drive down was painless. A quick border crossing and a few rounds of carÂ bingo and we arrived at the Seattle Sheraton, which is directly across the street from theÂ Convention Center – a key, it turned out, to the trip’s success.

Granny’s presence allowed my husband and I to skip off for the evening, attend a coupleÂ of panels, and have dinner with colleagues at Spur Gastropub. Post-dinner beers at theÂ hotel bar – which was teeming with industry folk – turned us giddy with freedom. AÂ feeling that evaporated at 6 a.m. the next morning, when the overexcited birthday boy burstÂ through the adjoining door with his sister.

But it was con day, no time for loafing, so we staggered down to the buffet. After gorgingÂ on hotel waffles, the kids dressed for their first visit to the convention floor. As soon asÂ they were outfitted in last year’s Halloween costumes – a homemade Thor and a store-bought Spider-Man – we crossed the street to brave the line-up.

It was long and winding, but moved quickly and provided plenty of entertainment.

“Look Mummy, there’s Waldo,” my son said, every time we zig-zagged past the guyÂ in a red-and-white-striped shirt and pom-pom hat. A toddler-sized Spider-Man caughtÂ my daughter’s eye and they stared each other down. My son got a high-five from a full-Â grown Thor. The kids decided to start counting their doppelgangers. 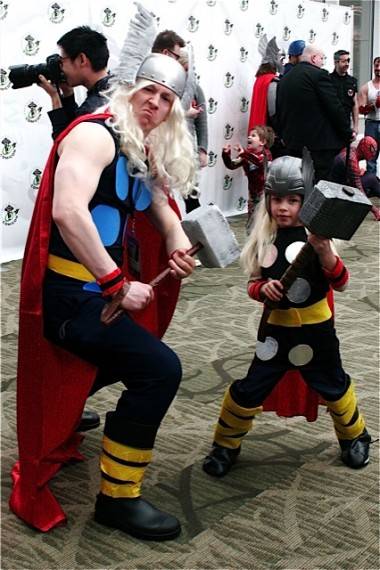 In a fit of pre-con anxiety, my husband had drawn up an itinerary. A smart move: it keptÂ us focused and the kids engaged.

Stop 1: The DC booth, where mini-Thor and mini-Spidey posed for photos while weÂ stood in line. Kids in costumes were a rare sight at the con; despite the event’s family-friendliness, comics don’t attract kids like they used to. The long line ended in a generousÂ pile of free pins and comics, well worth the 20-minute wait.

Stop 2: The T-shirt booth. This one proved fruitless. There were hundreds of adult-sizedÂ shirts and a few infant sizes, but no decent shirts that fit either of our mid-sized kids. WeÂ consoled them at the toy booth with squishy, melon-headed Thor and Spider-Man stuffiesÂ to match their costumes.

Stop 3: Artists’ Alley, to check out Daddy’s table. The con floor was heating up, theÂ crowds bigger than previous years, according to several of the pros. Both kids wereÂ glassy-eyed and the four-year-old was getting squirrely. We decided to beat a retreat andÂ go for lunch, but the route to the exit was swarming and filled with distractions. A stopÂ for some handshaking at the Vertigo booth and a pause to look at beautiful hand-paintedÂ Tiny Kitten Teeth comics and Chris Yates’ hand-made wooden jigsaw puzzles triggered aÂ full-scale preschooler meltdown.

This is where the conveniently-located hotel and the extra adult paid off. We sent theÂ over-stimulated four-year-old across the road with Granny for an afternoon of Animal Planet and cheese crackers. Our instincts, it turned out, had been right. There but for the grace ofÂ Granny went I.

The rest of the day was a pleasure.

Stop 4: The quarter bins, where the boy spent an hour selecting old ’80s comics – withÂ their episodic nature and simpler storylines, they’re the most kid-friendly ones out there. 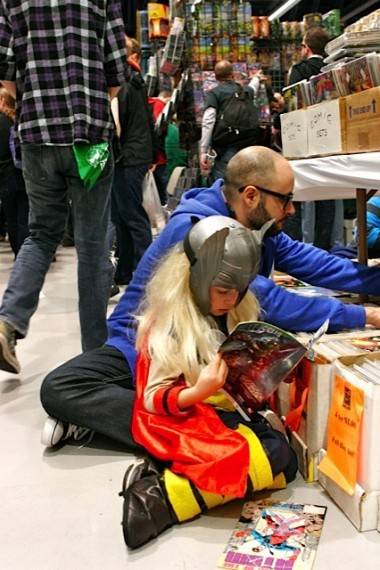 Stop 5: Artists’ Alley again to beg for sketches. While artists charge fans anywhere fromÂ $25 to $400 for a commissioned drawing at a con, many don’t mind doing small sketchesÂ for kids for free. The boy collected four Thor head sketches and was satisfied.

Stop 6: Photos and costume-spotting in the lobby. Pictures with an impressive GalactusÂ and Silver Surfer capped off the con experience nicely. 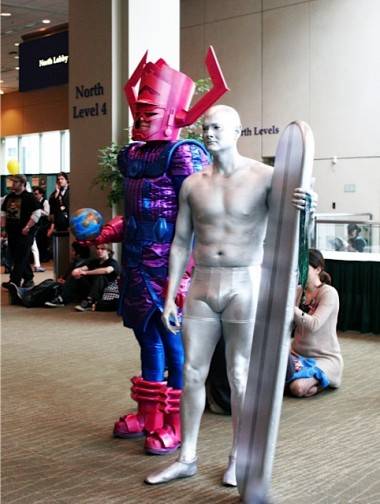 Stop 7: Pizza, ice cream and arcade games at Gameworks, across the road from the hotel.

All-in-all, the greatest birthday a seven-year-old boy could hope for.

Lessons learned: Pre-scouting the con floor and putting together an itinerary wasÂ invaluable. And kids under seven are only likely to last an hour on the con floor, so bring aÂ babysitter or be prepared to bail early if you’re travelling with tinies.

Overall, our first family comicon was a success. I’ll be sure to treasure the memories,Â because I have a feeling it’ll be a few years before the short ones and I get to tag alongÂ again.

One response to “Taking the kids to the con”