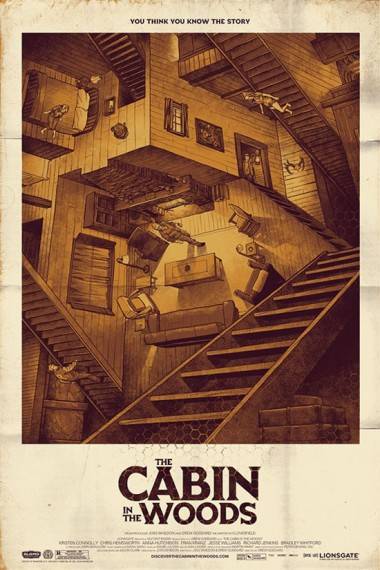 The Cabin in the Woods poster by Mondo and Phantom City Creative.

Movie review – The Cabin in the Woods

[Warning: I heartily recommend seeing Cabin in the Woods knowing as little as possible about it beforehand. While I’ve refrained from major spoilers in this review, things still get spilled or are hinted at that are best experienced in the theatre.]

The Cabin in the Woods is not only a ripped-out tongue-and-cheek tribute to all slasher movies that have come before, but it also carves out its own unique spot as a pitch-black meta-horror comedy.

Cabin is a wild ride best experienced in the dark, not knowing any of the turns ahead, which should come as a surprise to absolutely no one familiar with the film’s co-writer and genre mastermind, Joss Whedon (Buffy the Vampire Slayer, Firefly), who not just spins tropes around, but damn well breakdances with them.

Shot in Vancouver three years ago under the secretive codename Mordecai, the only thing you really need to know about Cabin in the Woods is that even with all the twists and turns packed into the clever hi-concept, is that it never stops being about teen-ish types trying to survive a massacre straight out of a horror movie.

But Cabin is also sort of about our desire to watch teen-ish types attempt to survive horror movie scenarios.

Cabin’s fresh cast of young could-be victims is note-perfect, with them all playing their clichÃ©d performances to a tee, with a peak of subtle humanity underneath. A pre-Thor Chris Hemsworth is the alpha jock and Anna Hutchison plays the bleach-blonde sexpot, who also gets one of the most horrifically suspenseful make-out scenes since Lea Thompson met Howard the Duck.

Kirsten Connolly plays the classic Good Girl horror lead, and looks like she was perfected in a lab for the role, somehow resembling both Ellie Kemper and Scarlett Johansson, as she switches from girl-next-door to ass-kicker. And Fran Kranz – Topher from Dollhouse to the Whedonites – plays a bong-hitting scene-stealer of the highest order.

But Bradley Whitford and Richard Jenkins chew scenery like no one else’s business – acting as audience-surrogates, of sorts — with their droll, humdrum bantering amidst complete surreal carnage.

But as clever as the script is, and as great as the ensemble is, director Drew Goddard is what ultimately sells the high-concept of the film, while striking a unique tone that allows the unique script to succeed.

Throughout Cabin, Goddard is also subverting the pacing and timing of every suspense-horror movie, maximizing it to seat-jumping results.

Even when the movie pulls back or dishes out the funny stuff, it’s a rare feat to have an audience laugh at horror, while also cringe and feel unsettled at their own laughter.

And despite all the wit and humour in the movie, Cabin never lowers the stakes. The threat to the characters is always real, and never lowered or dismissed — especially in a gleefully, maniacal bloodbath of a Third Act.

The only complaint I have for the soon-to-be cult classic is small, even though it will sound like a huge problem:

Cabin in the Woods isn’t scary.

Or at least it’s not scary by regular scary movie standards. You probably won’t leave the theatre wondering if a supernatural mass murderer is still out there, somewhere. Instead, Cabin’s horror is a deeper, unsettling fear, almost bordering on that whole Lovecraftian impending-doom-for-humanity thing.