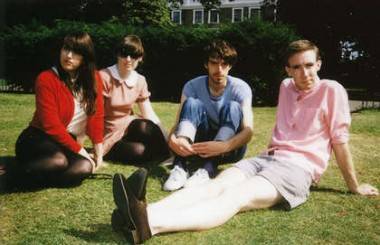 Veronica Falls came together in London in 2009 when Patrick Doyle and Roxanne Clifford hooked up with James Hoare (guitars/vocals) and, later, Marion Herbain (bass). “Found Love in a Graveyard”, the quartet’s first single, established the group’s Goth-y girl-group pop sound. Live shows in Europe and the U.S. as well as more singles followed, and the band released its full-length, self-titled album last year.

We reached Hoare on the third day of their latest North American tour – their fourth – which brings them to the Media Club in Vancouver Feb 20. Visit our Concert Preview Page to find out how to win tickets.

Shawn Conner: Would you record your second album in North America? Are you already thinking about your next record?

James Hoare: We thought about recording the first record in North America, but we were worried about coming over and having to return on a certain date, and if we didn’t have it finished – logistically there could have been problems. It could be something we might do. There are a lot of really good studios with analog equipment in place.

SC: Would you say your influences are more British or American?

JH: Both, I think, really, and then also from some other places, like New Zealand. But there’s definitely a lot of American stuff there – from the ’50s and ’60s onward.

SC: I think I read that you didn’t like the first sessions you did for the record?

JH: Yeah, yeah, that’s right. It was a bit too slick. It didn’t have much character.

SC: Did you know the sound you wanted before you went into the studio, or was it only after hearing those initial recordings –

SC: Obviously you’re going for a simple, even minimalist sound on this record. Is there a danger that that will become too studied, too deliberate?

JH: Yeah, I think that could be the case. We’re not going to necessarily use that as a template for other recordings, we’re going to take it as it comes as far as direction. We’ve just done some new recordings and they may be slightly heavier on the guitar.

SC: Who are some of your favourite guitar players?

JH: I like the Byrds’ guitar work a lot – Roger McGuinn, Clarence White they had playing with them. And Sterling Morrison and Lou Reed, not the most ostentatious style of guitar playing. Peter Buck, from REM – I like that ringing-out, chime-y guitar.

SC: Have you listened to Metal Machine Music [Reed’s infamous double album of feedback] all the way through?

JH: I have listened to it, but not all the way through. I’m aware of its existence. But I prefer the more poppy records, obviously the early ones, Transformer, Berlin, Coney Island Baby, I haven’t really listened to that thing he did with Metallica.

SC: Critics have not been kind.

JH: He probably doesn’t care at all. That’s probably why he’s doing it. I have a theory he does a lot of things just to annoy the diehard fans from the early days. All the Velvet Underground purist fans must hate that he’s doing that Metallica collaboration.

Have you watched him singing “Perfect Day” with Pavarotti? You should watch that, it’s really good. Really good.

SC: I read a review on a British magazine’s website of one of your live shows and it said something about “Veronica Falls’ unprecedented (150th) position in the UK Albums Chart” and I wondered what that meant. What was unprecedented about it?

JH: I think people just put words out there and they don’t really think about the actual meaning. I think it’s just a position. It’s not even good or bad. Today, how many records do you have to sell to get into charts? Charts aren’t really that relevant.

SC: Obviously what bands are having to do in the Internet age is find new cool merch to sell. And you’re selling a cassette you did with another band, Brilliant Colors, on this tour?

JH: Yeah. We thought it would be nice to do a few extra things like that. We weren’t sure if people would buy cassettes, but they seem to be selling really well. We did a covers EP too. It’s got a Eurythmics cover, a West Coast Pop Art Experimental Band cover, The Verlaines, Slumber Party.

JH: “Thorn In My Side”. It sounds like it could’ve been a classic ’60s pop song. It could have been like a ’60s girl-group song.

SC: They’re out of fashion these days. You never hear about them – you barely even hear “Sweet Dreams (Are Made of This)”.

JH: True. True. Maybe it’s time they had a renaissance. It kind of works like that, they get kind of forgotten for a bit then they get brought back into the public eye.

SC: Are there any music shrines you’ve visited in North America in the past, or want to visit?

JH: I really want to go to Aberdeen, where Kurt Cobain was brought up. I read so much about it when I was a child. We went through Clear Lake in Iowa where Buddy Holly died in the plane crash, in the middle of the night, we drove just a few miles from the crash site and listened to Buddy Holly in the car. That was nice.