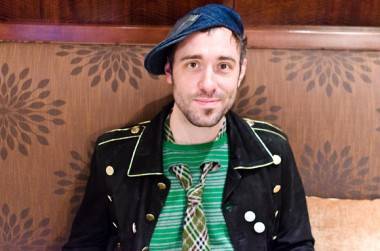 “Perhaps I’ll take a holiday and get as far away as I can,” sings Charlie Winston on the first single off his latest LP, Running Still.

Vancouver isn’t the furthest place from the British singer-songwriter’s Paris home, but it’s pretty damn close. And he’s not on holiday, but from what I could tell during our interview before his Feb 4 show at the Commodore Ballroom, he was trying his best to take in everything Canada has to offer during his tour here.

Winston released his debut, Make Way, in 2006, and followed it with 2009’s Hobo, which contained his most successful single, “Like a Hobo”. The music video for that song has nine-million hits on YouTube, and, as far as I can tell, does not contain a single cute cat playing Angry Birds on an iPad. His most recent LP, Running Still, was released on Nov 21, 2011. 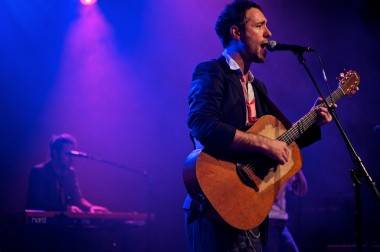 Max Hirtz: Is this your second or third tour in Canada?

Charlie Winston: It’s my second proper tour, really. But my first headline tour. So, I’m pretty stoked really to be able to come do all my own shows and practically sell most of it out. It’s been great.

MH: Was the non-headlining one with Bedouin Soundclash?

CW: Yeah. And that was fantastic. ‘Cause they’ve got a great audience in Canada. And they’re really cool guys. That was in November, 2010.

MH: This tour, you’ve been touring with Current Swell, right?

MH: On to Running Still, your latest album. One thing that kind of struck me is that there’s a big contrast between some of the songs. “Lift Me Gently” is a very gentle song, and “Rockin in the Suburbs” is pretty crazy compared to that one. When you’re in the studio, do you have to wait until you’re in the right mood to record those songs, or can you just kind of switch it on and off?

CW: It’s just accessing the world, really. The imaginative world. And accessing the energy that’s required for it. Sometimes, yes. Sometimes the head’s not in the right space for certain songs. But you can’t take that attitude too much because, the thing is, then you’ll never get anything done if you’re waiting for your emotions to be there first. A lot of working in the studio is just about doing it and getting it done. You can waste a lot of time by getting all spiritual about it and thinking, you know, you’ve got to have the candles right before we can record the songs. Everything goes on inside the head, really, and you can control that.

MH: Do you find it easier to control that now than when you first started? Do you find you have a wider range of emotions you can access at any time?

CW: I think your emotional depth is born in the early years, in a way, from the relationships that are formed with your family and friends at a young age. But I think love can be thrown around as a subject in songwriting a little too easily sometimes. One thing my dad always said to me when I started writing songs is, “Don’t sing about love if you don’t know what you’re talking about. There’s a lot of other things you can sing about.”

MH: What was it like working on the set of the video for “I Love Your Smile”?

CW: It was great. It was lovely working with Audrey [Tautou]. She’s really great, and we had a lot of fun. There was a director for the film, but, having written the story, and it being my song, I directed her and I on the way to act it. I didn’t want it to be too twee. It was really good fun, and we did it in two days. All the light was perfect, and it really worked out well. The reason why I got [Audrey] involved is because I heard that she was talking in interviews that she liked my album. She actually did it for nothing.

MH: When you first start writing a song, do you picture it as a fingerpicked guitar song or a full arrangement?

CW: Not always. Sometimes yes. Sometimes I’ll have it totally clear in my head exactly who plays what. And then other times, it will be much more of a case of, “I’ve written this song and let’s see where we can take it.” Sometimes I write songs and I think to myself, “Okay, I’ll see what happens in the studio and how it comes out, and I don’t want to play guitar on this song.” And then we arrange it with the band without guitar, and it just doesn’t sound like me anymore. The nucleus of the idea is often born on the instrument I’ve written it on, and it’s difficult to take that instrument away, ’cause it takes something away from the song a little.

MH: Are there any artists today that you respect as much as some older bands? You’ve talked about [being a fan of] Leonard Cohen and Bob Dylan.

CW: I don’t think there’s many artists that I’d put on the same pedestal. But I think that’s because history proves that. Even about myself, I would say… I’m not even far enough in my career that you can judge me as an artist, really. Maybe by my fourth album, you can start to say what kind of artist I am. I think the proof of a great artist is the body of work he or she is willing to produce. But I have a lot of respect for the Black Keys. Radiohead‘s a bit old now, but I like them a lot. BjÃ¶rk as well. Although, she seems to be less focused on writing songs and more into conceptual ideas. Which is fine, too. It doesn’t make her any less of an artist. There’s a bunch of artists I like, but I can’t think of them.

MH: “Like a Hobo” has quite a catchy chorus, as do many of your songs. Is that something you strive for?

CW: I figure that songs are best when people want to sing them, you know? If you have it in your head, then it makes you want to sing it. I like catchy songs. But, at the same time, I don’t think there’s anything wrong with the opposite, either. The thing is that songs should be written to be sung. You should want to listen to them and feel yourself singing them and sort of empathizing with the song in a certain way. I think the standards have dropped so much because now production values seem to be more important than songs. Very few people seem to write good songs, I think.