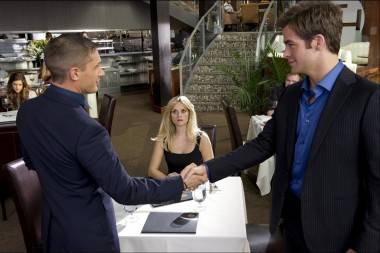 Is it really too much to ask a standard Hollywood entertainment flick to be entertaining?

This Means War, directed by McG (aka Joseph McGinty Nichol) and starring Reese Witherspoon, Chris Pine and Tom Hardy, is the sort of flick audiences rely on for escapist fun. So when it does not even deliver on that slender promise, the movie becomes both annoying and boring very quickly.

Most reviewers have mentioned that the charisma of the three stars (I am not counting Chelsea Handler as one of the stars because she really is not an actress at all) carries the film, but when all of the characters are devoid of personality and development, does it really matter how “charismatic” the actors playing the roles are?Â  I suppose that if all you care about when you go to the movies is how blue the actors’ eyes look, then your answer to that rhetorical question might be “yes.” For most people, however the answer is a resounding “nope.”

Adding to the characterless-ness of the characters is the absurdity of the plot. Again, audiences do not really expect hyper-realism in a movie like this, but even the idea that two handsome CIA operatives like FDR (Pine) and Tuck (Hardy) would be literally fighting tooth-and-nail over Witherspoon’s Lauren is a tad hard to swallow. Not to hate on my girl Reese or anything, but it’s not really adequately explained exactly why these two guys are falling all over themselves to be with her even before they know her at all. Yes, male competitiveness may be part of the answer, but the writers could have also given Lauren some compelling traits that would explain their over-the-top ardour.

The film is clearly designed to be a chick flick that your boyfriend or husband won’t mind going to see, given that it involves both romance and explosions. But in trying to please everyone, the film fails at both its romantic-comedy goals and its action-adventure aspirations. There is no heart to drive the romantic-comedy engine, and the action is disjointed at best. Even the bromance aspect of the film is a bit creepy. In one scene, for example, we are treated to FDR repeatedly calling Tuck like some needy lover while Tuck is busy out on a date with Lauren, and the whole thing is just far too pathetic to even be funny.

This Means War is a perfect example of Hollywood phoning it in, even when it would only take a minimum of effort to give the audience what it wants. When the target market’s expectations are so low already, logic would dictate that this movie should be enjoyable. But by sucking the life out of the characters and serving up an escapist plot that is very hard to escape into, the film manages to leave even the least discerning movie-goer out in the cold. Take your date to go see this on Valentine’s Day at your own peril.