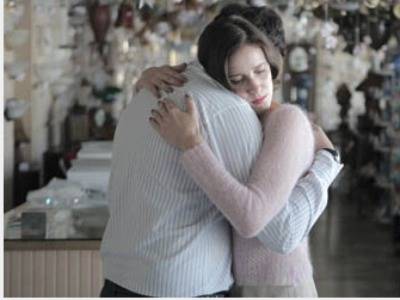 A scene from the movie Alps.

The film Alps, by Greek director Yorgos Lanthimos (whose previous film Dogtooth earned him an Oscar nomination), is one of those “love it or hate it” films. Or rather, you may love it for the unique way the film explores its themes, but loathe it for the tedious route it takes to get there.

Contrary to its title, Alps is not about a mountain range, in the same way that the film isn’t really about the characters themselves, but who those characters are pretending to be at any given moment. The film is about death and identity, two very slippery subjects which are hard to fathom, so the mountain metaphor is nonetheless apt.

The protagonists of Alps belong to a (highly dysfunctional) group that provides a service to the loved ones of the recently deceased. Namely, they act as stand-ins for the dearly departed, adopting the dead person’s mode of dress, talking the way they used to, and re-enacting certain memorable “scenes” from the deceased’s life. These are acts performed in service of grief and desperation, not with any joy or even in a very “life-like” sort of way. In fact, the members of the Alps group are all pretty bad actors when it comes right down to it.

But then again, Lanthimos seems to be saying, aren’t we all bad “actors,” in a way? Our identities are subject to inconsistencies and gaps, and our day-to-day existences are mostly repetitions of established routines and habits. The main character, a nurse (played by Aggeliki Papoulia) who goes by the code name Mont Rosa, is essentially a blank slate that other people, including the audience, draw different identities upon. How you view her character and the other characters in the film has a lot to do with the meanings you impose on them. In other words, much like the dead people these characters play, they are what we want them to be.

This lack of direction is purposeful but it is also alienating to a degree. Lanthimos wants his audience to be adrift to an extent, but the energy it takes to sustain one’s attention to the conclusion of the film is a lot to ask of his audience – even a non-mainstream film audience. A lot of goodwill will be required, but if you can muster it, the film is a unique experience that explores its themes in a way we haven’t really seen before.