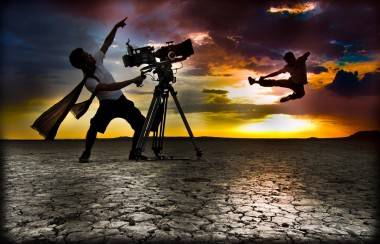 Like it or not, 3D movies are probably here to stay. Between the east of “major event” marketing it enables, increased ticket receipts for studios and increase in difficulty they pose to pirates with designs to distribute screeners, 3D is just too good a proposition to pass up for the makers of blockbusters.

But what aboutÂ movie-goers? While in many cases 2D ticket sales outpace 3D and loud voices from critics and filmmakers alike decryÂ the presentation issues and economically inspiredÂ addition of bad 3D effects inÂ post production, many still call 3D the future of cinema.

To answer some burning questions to do with 3D film, The Snipe spoke toÂ RohamÂ Rahmanian, a Vancouver-raised 3D filmmaker quickly becoming an authority on the subject. Rahmanian’s credits include 127 Hours, as well as skateboarding and music videos. He has also been selected to produce the 3D aspect of photographer Michel Comte’s feature film Madame Butterfly. 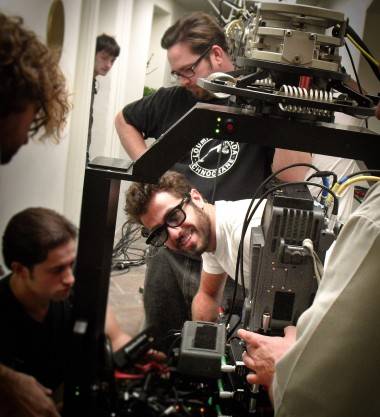 Clinton Hallahan:Â What, in your opinion, makes 3D superior to traditional photography? Is a film shot in 3D now inferior? Are there films that should not be shot in 3D?

RohamÂ Rahmanian:Â 3D (stereoscopic) is not superior to traditional photography. Just like color is not superior to black and white photography. This is a new medium. It has its own unique qualities and is in its early stages of development. There are so many new advantages in the stereo world; you can interact with your audience in ways you could never imagine. People will lose themselves in movies all over again. Yes, there is some apprehension towards 3D, but realize we’ve spent one hundred years making our three-dimensional world into the perfect two dimensional one; so it will take some time before we fully embrace 3D entertainment. This is not about the new RED or ALEXAÂ camera,Â it’s about a whole new level of artistry.

CH: Are there films that should not be shot in 3D?

RR:Â As far as films that should not be shot in 3D,Â I think that’s up the to the filmmakers.Â WhetherÂ it’sÂ an independent or a big-budget studio flick; it’s really what you plan to do with the end result. Is it designed to be aÂ filmÂ that people will remember or is it designed toÂ pull audiences into the theater? If the 3D is taking away from that end result then it shouldn’t be shot in 3D. 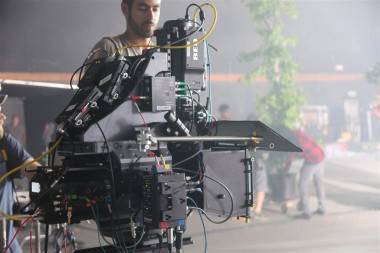 RR:Â I’ve been fascinated with emerging technologies ever since I can remember.Â I grew up during the Atari/Sega era when videoÂ games were just becoming three-dimensional.Â I was super fascinated by finely crafted mechanical gear like cameras and even built computers for a summer,Â and I think,Â simplyÂ put,Â it just came naturally to me. I understood technology very quickly. I was the little kid that wouldÂ getÂ everyone’s VCR to work. I remember being around seven and asking my mother whatÂ would be the nextÂ kind of photosÂ cameras could take, and she unknowingly replied, “I don’t know, 3D?” I think it stuck.

CH:Â What do you think of the recent backlash against 3D? Do you think that the decreasing number of professional projectionists and the complexities of modern projectors will lead to a degradation of presentation quality? Both TerranceÂ MalickÂ and Michael Bay have sent highly publicized letters to what is left of projection professionals over the way they would prefer their films displayed. Has the issue become a problem among filmmakers?

RR:Â I think that technology in every industry is growing at an exponential rate. Think about how many factory workers were assigned to build a carÂ 50 yearsÂ ago. If we go at the same rate andÂ with the same attitude, in 50 years there won’t beÂ manyÂ day jobs, period.

Same thing applies to projectionists. They are making better and better projectors. The other day we were doing a 3D panel at the LA independent theater and we got to talk about making DCPs. If you don’t know what a DCP is it’s a Digital Cinema Package; basically, it’s an electronic package with the film information embedded in it. Every movie theater you’ve ever been to uses them.

It’sÂ aÂ standard projection format practicedÂ byÂ the studios but also pushes the independent filmmakers out of the market. It used to cost thousands of dollars to do,Â but that’s changing and just the other dayÂ we watched twoÂ pieces that both were in DCP and it hadn’t cost a dollar. That’s what’s happening. The projectors are getting better,Â and yes,Â they will be automated, something as simple as sending the DCPs to a server and programmed to play at certain times.

It won’t happen over night. There will definitely be quality problems to begin with. Sound will work but no picture etc, but with a little time it will become automated just like the car factories. Of course there will be the top tier group of filmmakers who will want to make adjustments at the theater projection level and I think that’s fine, when you’re that meticulous I think by all means go for it. Don’t they make custom cars?

CH:Â What do you think about making films 3D in post-processing as opposed to shooting in 3D natively?

RR: I think this was actually a question at the panel or it was Andrew ParkeÂ whoÂ asked the audience whether they could tell the difference between the two. We watched a piece byÂ Ray Zone who had converted the original “Mouse Trap” from 720X480 resolution to 65mm 2-3K IMAX3D, and it was gorgeous. Not something I would have ever seen otherwise.

I think it wouldÂ be fun to see some of the old Disney cartoons I watched as kid in 3D. But I know immediately people will disagree and ask why in God’s name would I do that to a classic.Â My response: because it’s a classic. It’ll still be in 2D don’t worry. But on a more serious note, like we discussed at the panel and PerryÂ HobermanÂ actually summed it up wonderfully, there is an art to 3D conversions, because now you have complete control over the space. You choose what goes where and it’s kind of awesome. You could do things you could never do “yet” with 3D rigs and cameras.

At the same time shooting is an art formÂ in andÂ of itself. You have two images. Two surfaces to work with and you can go absolutely nuts. Although it’s nice to have endless possibilities in post, it’s really nice to have “real” physical rules guiding your decisions. And I ultimately want to go shoot something in space so I’d rather take as many cameras as possible with me to document it.

CH:Â How did your time atÂ CapilanoÂ University (nee College)Â help you in the film industry? Is film school still a viable option for interested students?

RR:Â My time atÂ CapilanoÂ was amazing. I learned so much, not just about filmmaking,Â butÂ about myself andÂ myÂ peers. I’d been making films since I was 16 and went to my first “real” set around 17 as an assistant props person soÂ going inÂ I had a great deal of exposure to the industry.

The Cap program finally broke it all down for me and gave me the tools, logistically and physically to get some serious work done, it also helped that I became friends with Ian Gustafson who supervised the equipment.

It was tough though. I was juggling between being on sets and trying to go to class at the same time, so many of the professors weren’t too fond of me but the few that were, really helped me with my career. Most notably BillÂ Thumm, the dean of the school – he never asked questions, as long as I came to him with a plan, even though a little crazy, he would help me out. He sent me to TomÂ Falcan,Â who was one of the big armorers in town,Â and there were guns as far as the eye could see,Â and that day I fell in love with the program.

SeannaÂ McPherson taught me soÂ many things about being on set,Â beingÂ properlyÂ organized,Â and,Â ofÂ course, how to lie.Â She would make us tellÂ stories whenever we were late to class and I was always late.Â She helped promote my creativity.

I think film school is definitely the bestÂ way to learn filmmaking. IÂ transferredÂ to USC’s film programÂ after doing two years atÂ Capilano. The transition really made me realizeÂ how important relationships with my peers were. I went from a veryÂ “hands-on”Â school to a very studio-style structured school that had been around for 80 years. I was constantly told not to do things and abide by the rules but naturally I didn’t.

Honestly,Â that back and forth struggle was the biggest lesson of all. It taught meÂ how to deal with the politics involved in filmmaking. I think even if you were interested in only one role in the craft of filmmaking you should still learn all of them and film school isn’t complete without you going out and just experimenting to the limit. I know how to run shylockÂ distroÂ and balance the legs on a generator with 18Ks just because I got a DP gig with a bunch of moneyÂ and didn’t know any pros in LA toÂ help me so my friend Ryan Johnson and I just bought the book and learned how to do it ourselves and shot an awesome commercial that went national. 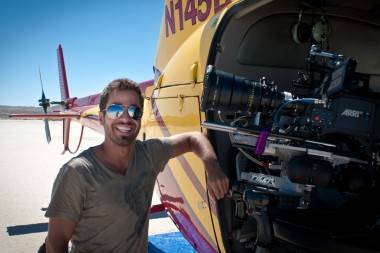 CH:Â Does Vancouver still deserve the title of “Hollywood North”? Could you be where you are today if you had stayed here?

RR:Â Those are really good questions. Honestly, I wouldn’t be where I am today without Vancouver. Yes a lot of productions have left, but more are coming back.

I spoke with IgorÂ JadueÂ a couple weeks ago, an amazing feature/commercial cinematographer who lives in Vancouver, and constantly shoots back and forth between LA and Vancouver and he was talking about how crazy busy it has been over there. British Columbia is a beautiful part of this earth, I think it should have its own identity not one that is used to make other places look good. Even though the Canadian film marketÂ is not as commercial as the U.S. market is, it has great potential toÂ create its own identity. Everything is already there we just need more content. My intention is to work everywhere in the world including the US and Canada, that’s why I got into film to begin with so I could travel the world!

CH:Â Do you ever see yourself moving from technology/production into direction?

RR:Â You know when I started in film I really dreamed about being a director. But I gave up on it because I never felt I was ready, andÂ I still don’t. For a whileÂ I thoughtÂ that I wasn’t creative enough.

ButÂ latelyÂ I’veÂ realizedÂ that my dream is to be in front of the screen. I’veÂ just been completely discouraged fromÂ actingÂ throughoutÂ my lifeÂ mostlyÂ by my educatorsÂ becauseÂ they wanted meÂ to be an engineer. So I think there might be creative hope for me after all.Â I connect with actors really well and have found that IÂ can convey what I want from themÂ effectively.Â But it’s a road that’ll involve a lotÂ of failures until hopefully there will be success.