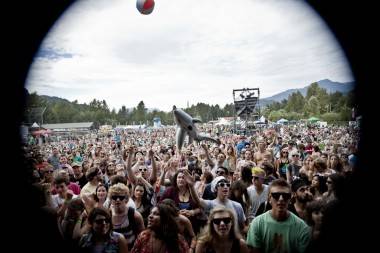 The initial lineup at Live at Squamish confounded me. None of the artists slated were a big draw individually, and together they seemed somewhat incongruous. Learning that Metric, who were initially scheduled to headline Saturday, were also performing on Sunday sweetened the journey. (Apparently one of the band members had a wedding to attend to on Saturday; Metric ended up doing an acoustic set sans member on Saturday and offered the full deal on Sunday.)

The festival grounds offered a typical and well-organized array of food stands, hippie clothes and jewelry, corporate-sponsored freebies (Nabob!), etc.Â The atmosphere was decidedly douchebag-free and practically dignified with the exception of the surplus of young children running about, many of whom were wearing giant headphones to protect their ears. 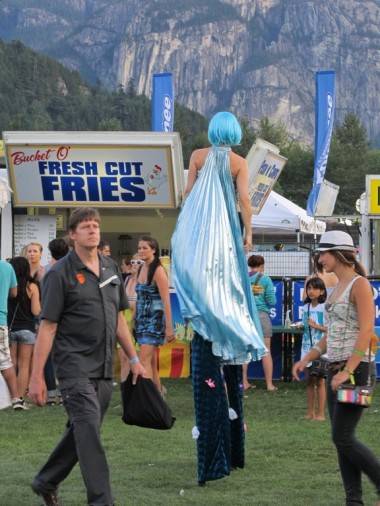 The main lawn provided an exceptional view: a giant stage, flanked by enormous screens, a mountainous backdrop backlit by a gorgeous sunset. As Metric took to the stage the crowd swelled and by the time the band started “Beating Like a Hammer” it was clear their set was in full swing and that it was time to relocate.

A quick recon mission closer to the stage revealed an inordinate number of photographers and cameras. All the crazy-kids-in-the-crowd shots in combination with the doting coverage of photogenic lead singer Emily Haines resulted in a tone of slick production, running counter to the organically rugged atmosphere of the venue.

The band maintained a taut energy well into their set though Haines, as de facto bandleader, maintained a reserved persona throughout.Â Though expressive in her delivery, she lacked the cheekily magnetic charisma of, say, Debbie Harry. However, unlike most of her female contemporaries, she is able to move a crowd while fully clothed, strumming a guitar, banging the keys and wearing sensible shoes (black leather shoe-boots with some studded bling). 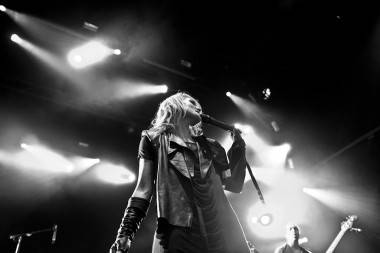 “The whole point of music is you are a listener. I’m a listener. I love music. This next song is about being in love with music,” Haines said, before launching into “Gimme Sympathy”. At another point she offered up lyrics to the Beastie Boys’ “Fight For Your Right” even though the majority of attendees weren’t yet born when Licensed to Ill was released (1985).

Weezer’s set was perfectly suited for the outdoor music venue, and the band did a fantastic job of filling the gargantuan space by moving around the stage (lots of instrument and vocal duties switching to be had) and even into the crowd, in which frontman Rivers Cuomo immersed himself while singing a few songs. The prototypically “nerdy” bandleader, wearing horn-rims, flat-front khakis, a button-up Oxford and red (cashmere) sweater, provided more on-stage chutzpah than most more likely-looking rock-star types.

Dressed in a fitted grey suit and tie, guitarist Brian Bell stood in contrast to his bandmates. This traditional yet entirely unironic ensemble was set off perfectly by his chevron-shaped guitar, the gold sparkles of which complemented his pink shirt.

Cuomo mentioned that earlier in the evening Bell had been unsuccessful in chatting up a woman wearing a Pinkerton T-shirt – apparently she didn’t know who he was. “Well, she does now,” he said, before heading into an entirely unexpected and kick-ass version of current It boy band Foster the People’s hit “Pumped Up Kicks”. 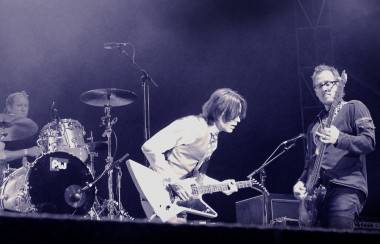 The band played their set like they were at a party, their contagious energy spilled out onto everyone in attendance. Cuomo shared several more anecdotes before the band launched into familiar hits like “Undone”, “Hash Pipe” and “Beverly Hills”, which featured some killer drums at the end. Another pleasant surprise was Radiohead’s “Paranoid Android”, making an appearance vis-Ã -vis an utterly faithful and on-point cover, which prompted numerous lighters across the sea of pleasantly surprised attendees.

“Everybody likes to dance to a hockey song, right?” offered Bell, before the band launched into their biggest hit, “Buddy Holly”. At this point the crowd were all up on their feet and singing along with the insanely catchy chorus. The final few moments saw the entire band crashing out on the drums all together, laughing and looking like they were having the time of their lives at some party in the remote mountains of Canada. 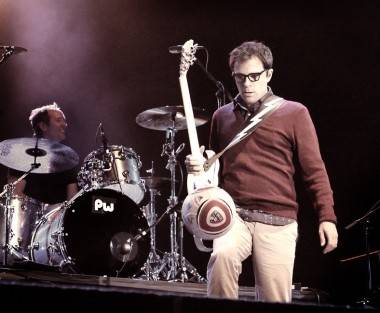