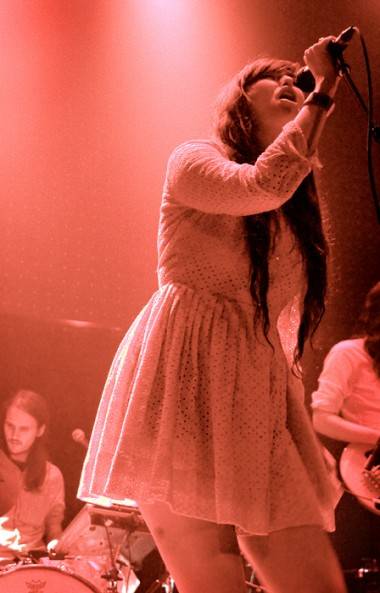 Brian Oblivion and Madeline Follin of Cults seemed a little frazzled before our scheduled chat at Venue. I later found out it was because they had just finished an interview with the hyperactive and often unpredictable Nardwuar The Human Serviette. The soft-spoken and modest duo started to relax when we started chatting about the ’60s youth culture, their own retro style, and the road to their “overnight” success.

Follin and Oblivion met while studying at NYU, but soon dropped their books for a career in rock and roll. Their small act of rebellion has certainly paid off now that they play to quick-growing audiences. Later that night, they played their largest crowd to date (read our review here). This down-to-earth group will have to quickly get used to being in the media spotlight. 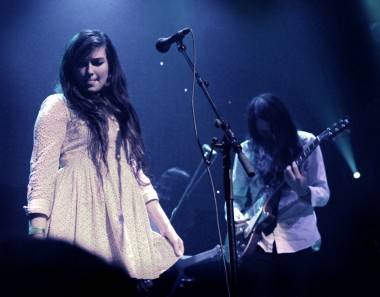 Ria Nevada: As an avid fan of ’60s pop, I’ve been really excited these days to see tons of new bands bringing back the melodic and upbeat sound from this genre; artists that come to mind are Twin Sister and The Morning Benders, whom you’ve actually done shows with.

RN: Yeah it was a really good one. What was it like being surrounded by fellow old souls?

BO: I feel like Twin Sister are way weirder than us [laughs]. They’re like the coolest, weirdest people ever. And Morning Benders are like so much more professional than we are. So it was a really interesting blend of like everything on that tour. And everybody got along really well, so it was really fun.

RN: That’s awesome. So you guys are definitely one of the heavy hitters in this throwback movement. Why do you think we romanticize the ’60s and its music so much?

BO: I think also a lot of that ’60s music could be considered the dawn of youth music. It was the first music that was just for kids. And those songs don’t sound very edgy now, but back then, they were like “Don’t you listen to that!” You know what I mean? The Shangri-Las were like Eminem or something. You had to hide the record under your bed. So there’s always that energy and that kind of feeling of rebellion that translates to young people forever, you know? So I think people are always gonna get that when they’re at a certain age.

RN: What do you think of the “every other decade theory”? Do you remember, or have you seen Dazed and Confused?

RN: You know how one of the characters talks about how the ’50s were boring, the ’60s rocked, the ’70s again were at a low. So by that reasoning, this decade is supposed to be the heyday for music, arts and culture.

BO: I mean, if bands like Arcade Fire are winning Grammys, and bands like Vampire Weekend and The XX are selling 500,000 records, then things are looking up.

RN: Yeah for sure. So a few sites, namely Pitchfork and Nylon have mentioned that you guys were quite elusive on the Internet when you first came out. Was this sense of mystery behind your history intentional?

MF: I think it started of uh, not intentionally. We were just making music and didn’t expect anybody to listen to it or care. We didn’t even think our friends would really care. And then people started paying attention. We didn’t know what to say and we didn’t want to put too much of ourselves out there. You know? Not much really to talk about. We’re pretty normal, boring people [laughs].

RN: So what are some of the perks now from being more recognized?

BO: I don’t know… I mean, other than just playing bigger shows there’s really nothing you have to go by in terms of anything, where any of that is concerned. There’s really no other way to judge success as a band than just to see how many people are interested to come see you play. That’s been going really well, so it’s fun to play for not only big audiences, but audiences who know your songs. It’s a pretty amazing feeling.

RN: And hearing your fans sing your lyrics back to you, that must be an unreal experience.

RN: I myself have had “Go Outside” and “Most Wanted” stuck in my head. It’s been on loop. So could you give us a brief rundown of how Cults came to be?

MF: We were both going to school, and we were living together, and we were working internships, and all of our friends were college dropouts in bands. Everybody was playing shows, and we were like, “We’re bored.” We’ve been just working this entire time, let’s do something creative, you know? Let’s play music. And one weekend we just sat down and we did the first three songs, and put them on the Internet. And they ended up picking up steam pretty quickly.

RN: Yeah, your bandcamp page has gotten a lot of traffic. And you gained the attention of Lily Allen, and I read that you guys were the first band signed to her label, In the Name of? That must have been a pretty big compliment!

MF: Yeah it was amazing. We love Lily Allen.

BO: Yeah, we weren’t really aware of her music. We were vaguely aware of it at the time, when we got asked to meet up with them. But then, we ended up meeting her and checking her music out. And it was really cool. Everyone that works at that label are really cool. And we’re still the only band on the label, so we get all the attention.

RN: Any plans to collaborate with Lily musically in the future?

BO: If we collaborate it wouldn’t necessarily be with someone that modern, I don’t think. And also, I think she’s pretty much done making music at this point. She’s like pregnant, she just got married, she’s got a clothing store and a record label, royalties, she’s fine.

RN: I mean, her song was featured on Glee, so she’s pretty much set for life. So thanks so much for chatting today. Have a great show tonight!