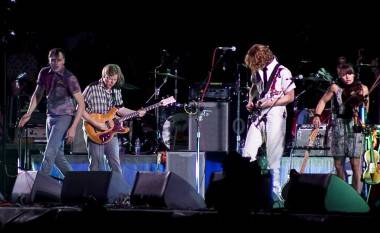 Their record went to number 1. They surprised everyone at the Grammys, and handily won two Brit Awards. But just who the heck is Arcade Fire?

This seems to be the question on the lips of everyone who’s not an indie-rock music fan. With Arcade Fire’s Grammy win for Best Album, even more so than the achievement of a number one record on the Billboard charts, the band suddenly finds itself catapulted into, if not international superstardom, then international confusion – especially now, after Arcade Fire won two Brit Awards.

To sum up: Arcade Fire is from Montreal, the band has released three full-length albums including 2010’s The Suburbs, the one everyone’s talking about and which took home the Grammy for best album. The group sells out arenas and The Suburbs went to number one on its release, so it’s not like they came out of nowhere. But their ascent has certainly caught a lot of people by surprise.

Guttersnipe caught up with just such a person recently, our own pop culture columnist Louise P. She chatted with us two days after the Grammys, when she was still flabbergasted by, as she calls them at one point, “Acadian Fire”. To put this conversation in some context: Louise is in her 40s, her mom in her 60s. Her mom, Anne, apparently discovered the band in 2004. Louise had never heard of them until the Grammys.

She starts off comparing them to the Flaming Lips… 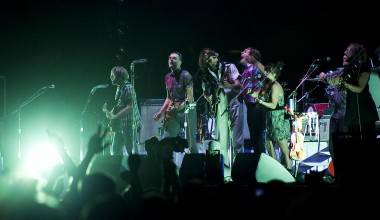 Louise: Only their old stuff sounds like Flaming Lips. Like the first CD that doesn’t have a name.

SC: How do you know about their old stuff?

Louise: Yeah, you’re going to love this! Listen to this. My mom’s been talking about this but I wasn’t following her for days. I didn’t follow what she was talking about but it all came together this morning when she told me about it again.

Years ago, 2004 or 5, she was at a clothing store and she heard this really nice song and she asked the guy working there, well, what is this? He said, huh, Arcade Fire and he wrote it down for her. So she goes to some store downtown and gives them this paper and they go away for awhile and they come back with this really dumpy looking CD that she goes ahead and buys. She liked it and she has the CD still.

Next thing she knows, she hasn’t heard of them ever again since that day in the store, and when she heard they were going to be playing on the Grammys she was going What the hell? And so when they won – I’ve never even heard of them – she couldn’t believe it, like she was just shocked. Because firstly when they performed on the Grammys she said she didn’t even recognize them, they weren’t anything like that CD she had. [That first 7-song self-titled EP was first released in 2003 and again in 2005.- ed.]

I read into it today, I was doing my research, and they’re totally different then what they were in the olden days. Now they have glockenspiels! What the hell’s a hurdy-gurdy? What the hell’s that? Don’t they all play each other’s instruments, they rotate around? They play with a French fuckin’ horn? And a harp? She [Anne, her mom] said at the Grammys it was so much noise and banging she couldn’t figure what the hell it was about!

And then I listened to her song that she liked, which is “Flaming Farm” or “The Flame Cabin” [it’s actually “Old Flame” – ed.] or something, and it sounds exactly like Flaming Lips. I haven’t listened to their new stuff.

Louise: No, it gets better! So my mom was telling me she heard on the news or wherever, whoever has this CD that she has, which has no name, it’s their first CD ever that they sold at their concerts, has a collector’s item. She’s got a collector’s item!

This is the second time she’s picked up on a band way before – like, she was on Muse before they became big too. She bought Muse for me and I said fuck forget it, I told her to take it back. She brought that up again today too, she said you know they were at the Grammys too. This was years and years ago when she bought it for me when she bought me the ghettoblaster. She said well she heard they were really good so she decided to buy it. But I, I never heard it, frankly forget it. And that was Muse. Yeah. So mom’s on the cutting-edge.

One response to “Who is Arcade Fire?”