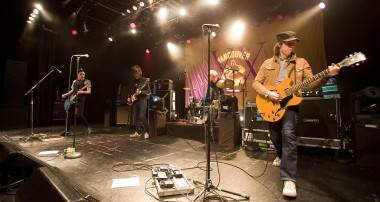 – by Erin Hanson/photos by Jason Statler

What sort of questions do you ask Sloan? I was a mega-fan in the mid-’90s; I fell a bit out of touch into the 2000s; and only now I am rediscovering Canada’s best-loved alt-rockers.

But I know precisely what you don’t ask Sloan. In the beginning, Smeared (1992) led to Sloan being hyped as Canada’s answer to grunge, and to a subsequent signing by Geffen, which had also signed Nirvana. But the band was instantly dropped when 1994’s Twice Removed failed to meet Geffen’s grunge requirements (whatever those were) – and ironically, it probably became a more quintessentially ’90s album in the process.

Then, in 1995, drummer/vocalist Andrew Scott moved from Sloan’s native Halifax to Toronto, prompting rumours that the band was on the verge of breaking up despite the success of their third album, One Chord to Another. Despite those rumours, Sloan went on to release an average of one album every two years. And so, despite it all being water under the bridge now, as I sat across from Scott on the Friday afternoon before the band’s June 3 Commodore Ballroom show in Vancouver, my 15-year-old self returned, my heart started beating, and anachronistic thoughts ran through my head, such as:

Don’t ask about being dropped from Geffen. Don’t ask if they’re breaking up. Don’t ask Andrew why he moved to Toronto. And for God’s sake, Erin, don’t admit that Andrew’s your favourite member. Don’t request “500 Up”.

But what year is it, anyway? That was, somewhat alarmingly, 15 years ago. And I don’t think I’m the only one who’s surprised at the passage of time. So, I sat down with Andrew to discussÂ what the kids are listening to nowadays, why the Commodore’s the best venue in North America, and the many reasons why Sloan, after 20 years, continues to resonate with their fans. 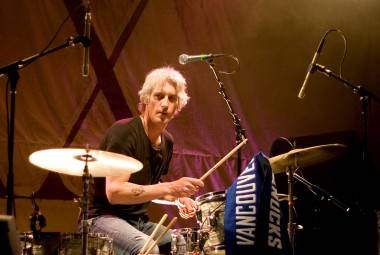 Erin Hanson: Do you notice any difference between audiences from coast to coast and in between?

Andrew Scott: I can’t say I do, really. You get what you get. Repeat offenders, newcomers, and everything in between. All the shows we play are over 19, and we used to always do all-ages shows, so we don’t get a lot of the kids anymore. But whether the kids consider us relevant or not is up for debate.

EH: Would you want to do all-ages shows?

AS: Sure. There’s all different kinds of young musical audiences out there and they’ve got discerning tastes. They know a hell of a lot more than they’re given credit for.

EH: You just released your latest album, The Double Cross, and it seems like this tour has been a celebration of your past 20 years together. How do you even decide on a setlist for something that big?

AS: We have a lot of songs to choose from, and you’ re never going to be able to please everyone at the shows. There’ s obviously some glaring omissions for whoever you’re talking to. We try to keep everybody equally represented to a degree and try and pick something from pretty much all of the records.

EH: With Sloan, everyone has their favourites and that will vary drastically from person to person. If someone’ s screaming out the name of their favourite song, do you ever spontaneously incorporate whatever people are yelling out at you?

AS: Sure. It’ s not a common occurrence, but we’ve played nights where we’ve just let people call it out and we’ll play whatever they call.

EH: You’ re been around for 20 years, and in that time music has changed so drastically. As a band, have you had to change your approach to producing or marketing your albums to keep up with the way audiences are accessing music?

AS: Absolutely. You can’ t just make a record and print it and release it and expect people to buy it. That’ s not the case anymore. You’ve got to be creative with what you’re putting out there. And so this time around I did all these handmade covers, and Jay, Gregory and Chris also contributed. At the end of the day we had 65 of them, and we numbered them all and released them as special editions. Just something that you can’ t buy at HMV or even your local record store. People bought them up just like that.

The sky’ s the limit in terms of how you can do it now, because the whole business is just a big uncharted scene of opportunity. Labels are giant Titanics that will sink any day now. Major labels, anyway. So you gotta think outside the box. It will work if you take risks and try shit.

EH: That’ s cool that you see it as an opportunity.

AS: Oh it is, totally. It’ s great. ‘Cos the playing field is a lot more level than it was 15, 20, even 30 years ago. It was so label-dominated with how records were sold. And you gotta tour. You gotta play shows. 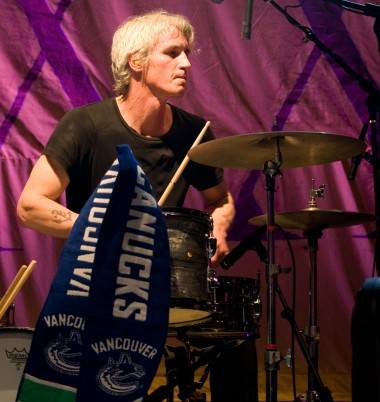 EH: There are these videos online in which celebrities talk about their favourite Sloan song, or the first time they heard you guys. Was that a surprise or did you know those were going to be released?

AS: We knew those were getting done. There’ s another example of what you gotta do to get people interested and pique their attention to what you’re doing. You take advantage of all the tools in your toolkit. It’ s really nice that they were keen to do it and it’s nice to hear all their funny anecdotes. But yeah, we were well aware of it.

EH: All these people are talking about how excited they are about you, but are there any new Canadian artists that you’ re particularly excited about right now?

AS: Golden Dogs are one of the greatest bands I’ ve seen in a long time. Al Tuck is another Canadian songwriting genius from Prince Edward Island, lived in Halifax. Dave Marsh and the True Love Rules, another Halifax musical genius. Those are three good starting points.

EH: Do you ever go back and listen to any of your old albums?

AS: Of course I do. You have to go back and listen sometimes. You gotta keep using that old material as where the bar was set previously for yourself. And if you feel that your songs are getting shittier, then it’ s probably time to pack it in.

EH: Do you feel like your live shows have changed over the years?

AS: Yeah, they were a bit more chaotic when we were first starting out, but we were just little tightened cables of young male energy back then. We’ re not young pups anymore. I think they’ ve definitely sobered a bit. Not that we were a bunch of drunks or anything. And again, referring to what you have to do to keep people interested, you have to include the audience, because they’ re part of the equation. You’ re not just up there by yourself. There is a give and take and it’ s important.

EH: The shows that I’ve been at have been pretty fun.

AS: The Commodore is the best club in North America, in my opinion.

EH: Really! What is it about the Commodore?

AS: Just everything about it. The stage is perfect, the sightlines are perfect. It’ s such a beautiful room, it’ s run by really generous and nice people. There’ s just no bullshit about this place.

EH: Do you have any musical guilty pleasures?

AS: My kids listen to that bad Mix 99 type of radio, and there’ s a couple of songs that I find myself humming which drives me nuts. But it’ s only because the playlist on those stations are only six or eight songs long and they keep rotating it all fucking day and night. So the kids don’ t even know whether they like it or not, they’ ve just heard it a million times and it’s running through their heads. But I can’ t really say it’ s a guilty pleasure, it’ s just a symptom of some evil force.

EH: My last question is another random one: what is the last good concert you’ve been to?

AS: I don’t really go to shows very often because I spend so much time in clubs working. When I’ m at home it’s the last thing I want to do. But the last show I saw that really kicked my ass… you know, it might have been Guided By Voices in this room, actually. Or Stereolab in this room. Mid ‘90s. Guided By Voices were touring Alien Lanes, and Stereolab were touring Emperor Tomato Ketchup. The Stereolab show in particular was pretty profound, I remember that. And Guided by Voices, they can’t do any wrong.

EH: The editor of Guttersnipe is obsessed with Guided by Voices. He’ll be excited by that.

AS: Really? Good for him. He’s part of the club.

EH: He’s got my sister hooked and now they’re trying to convert me as well.

AS: You’ve got to go to Dayton, Ohio and knock on Bob Pollard’s door and drink beer with him all day long.

EH: Is that what you do?

AS: That’s what he does.

EH: Well, that’s a good way to get into new music! Thank you very much, Andrew.