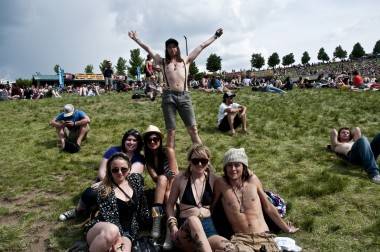 – by Jacqueline Ronson/photos by Jade Dempsey

Sunday, May 29, was Day 3, and exhaustion had settled in. Given this, it is nothing short of miraculous that so many bands kept my body moving till the early hours of the morning.

The sparse crowd at the Basia Bulat show filled out over the course of her set as people were drawn in to her sweet melodies and strong voice. The Toronto singer performed on ukulele, guitar and autoharp, and a trio of Vancouver sisters backed her up. She sang well, and seemed genuinely excited to play for us. There were certainly a few diehard fans in the crowd, and she earned herself at least a few more by the end of the show. 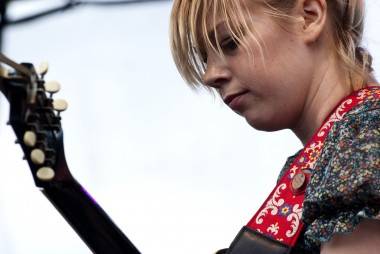 The Tokyo Police Club, another Canadian act, played shortly afterwards on the mainstage. They rocked it. Old fans and new fans alike were dancing in the crowd. Their energy was great, and the audience could feel it.

To continue with the Canadian theme, City and Colour played a very well-attended set in the late afternoon. Their melodic rock is the kind of music that really get inside you.

Flogging Molly played a set of Irish folk-inspired punk rock that had the audience jumping, dancing and moshing. A crew of fans nearby even broke out a jump rope and invited the boisterous audience around them over to play. It was the kind of show that makes your body scream, “I don’t care if you didn’t sleep last night. You are getting up and you are dancing and I don’t want to hear any complaints about it.” Awesome.

The Flaming Lips played the expected spectacularly theatrical set. The show opened with Wayne Coyne inside a giant globe, and he then rolled himself out of the crowd. He looked just like the lion from the Wizard of Oz with his head of curly hair and furry neck-piece. Then giant balloons and cannons of confetti shot out over the audience, and a few dozen women in matching school-girl outfits emerged to dance on either side of the stage. The band played their 1999 album, The Soft Bulletin, front to back. “Thank you for being so easily provoked into being happy,” Coyne said.

Brooklyn band Yeasayer played a set of pop-inspired synth-rock. They sounded awesome, and the crowd loved it.

Modest Mouse closed out the night at the mainstage, and it was epic. Their soaring orchestral rock songs were right at home in the majestic setting of the Gorge Amphitheater. They were excellent showmen, and seemed to understand that part of their job is not to let the performance get in the way of the music. Their nearly-two-hour set had me transfixed from the first note to the last, body bumping along with the beat throughout.