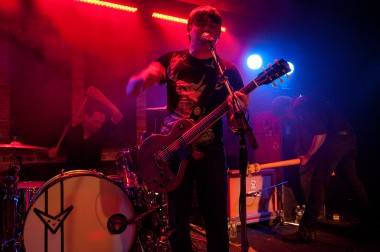 I’m pretty sure I went to The Bronze tonight.

All you ’90s nerds know exactly what I’m talking about. In Vancouver, The Bronze is called Electric Owl and it’s a rad little underground venue on Main and Prior with a bar at each end and a stage full of awesome in the middle; at least it was last night. Electric Owl hosted … And You Will Know Us By The Trail Of Dead for the only Canadian appearance of West Coast leg of their current tour, and by the end of the show, boy did we know them!

Opening act Follow That Bird kicked off the evening by slouching onto the stage and providing a mellow new-wave punk vibe. Though the dissonance of the microphone was distracting, the Stooges and Patti Smith were effectively channeled through the female lead’s detached vocal.

The set built up to a moderate energy level, filling the Owl with a killer vibe that suited the low-key starter crowd. At one point the band itself was in danger of breaking their hipster-cool with a rising excitement level, but managed to keep it just under the radar, leaving a wide margin for the energy that Trail Of Dead would later unleash. This hip young three-piece is definitely an up-and-coming act, and worth a second listen. 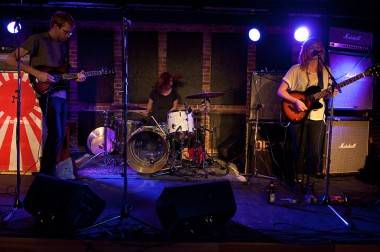 Second openers Ringo Deathstarr were welcomed to the stage by a sizeably larger crowd than FTB, and provided the growing numbers with a slough of trippy, rhythm-based numbers that ranged from electro-punk to something akin to the Ramones. The drums were solid, and the music was organized and enjoyable, though not as individualized as one might hope from a group with such a unique name.

The beat was good, the vocals less good, and suffered the same distortion that plagued Follow That Bird. Austin’s Ringo Deathstarr demonstrated their stage experience, despite informing a hungry audience that Canada is so lovely because everyone is just “so nice.” Always a faux-pas. That aside, this solid set was able to amp the crowd up for its next big treat… 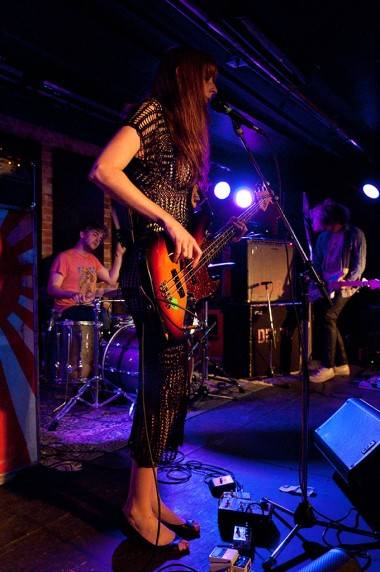 …the longest, most epic sound check in concert history. It turns out that Trail of Dead had been delayed at the border, and didn’t have time for a sound check. The first act didn’t hit the stage until after nine, so by the time the final sound check was finished and the lights dimmed, it was nearing half past eleven when Trail of Dead finally graced the stage.

The thing that struck me most about listening to Trail of Dead’s most recent album is its sense of story. Tao of the Dead isn’t just songs lined up on an album – it’s a journey from start to finish, and meant to be listened to in order. The message is that it doesn’t matter where you start, or end, it’s how you feel while you’re getting there that’s important. This band is all about creative transience; art as a journey, and they’re not afraid to translate that to the stage.

From their rotating door of bandmates (not counting the four on stage tonight, they’ve said goodbye to ten other members at various times) to their rotating talents – the original drummer became the lead guitarist halfway through the set, the band can definitely be called “restless”. The guitarist-turned-drummer (Jason Reece) eventually migrated to lead singer, then back to the drums, spelling off the initial lead singer (Conrad Keely) who took up the sticks for a couple songs. Only the bassist seemed content to remain in one spot for the duration of the show. 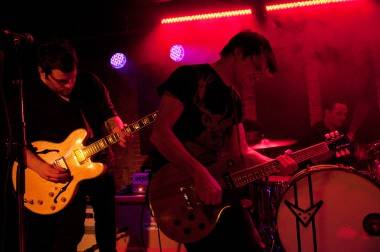 …And You Will Know Us By The Trail Of Dead at the Electric Owl, Vancouver, June 21 2011. Ashley Tanasiychuk photo

Starting off with “Strange News”, the quartet kicked off a conjoined medley of four songs from Tao of the Dead, which drew the audience in a bit further with each building number. Initially, vocals were a bit rough and resembled the emo-shout of Billy Talent more than the smooth melodic vocals on the album. As the band warmed, however, the vocals fell into a happier balance utilizing the gruff live energy without losing so much of the melody.

Midway through the set, they belted out “Caterwaul,” another stylistic detour, this one from their fourth album Source Tags and Codes. At one point, Keely raised a glass to the crowd, toasting the desire to keep trying, a salute to the process, as well as to all songs that begin with “one two three four!”

This toast kicked off the final sequence, which built in energy until a member from Ringo Deathstarr popped onto the stage, yelling “F*ck Yeah!” in time to the beat into one of the vacant mics. The chanting crowd ate it up, and the energy level continued to rise. The band began thrashing, dancing, and launched into a final push of instrumental glory. The last note left us hanging on an excellent high.

The sound check to eternity and the raspy initial vocals were worth getting through to get to this peak. Frontmen Conrad Keely and Jason Reece make it clear that The Trail of Dead will lead you where it leads you, and what you find along the way is far more important then what awaits you when you get there.

More photos of Trail Of Dead:

One response to “Trail of Dead at the Electric Owl”