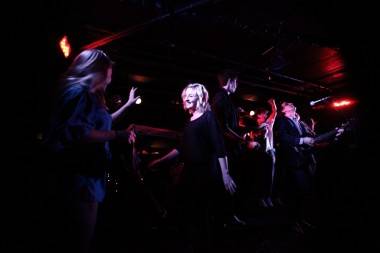 Where do they come from, these new, young Mountain Goats fans?

At this point in their career, the North Carolina-based band should barely be able to fill the 300+ capacity Biltmore Cabaret – Superchunk barely did the last time that stalwart, critical fave came through – never mind sell it out (as they did last night).

A cassette-only project begun by singer/songwriter John Darnielle nearly 20 years ago, the Mountain Goats has been a steady, reliable indie-rock fixture, respected but never really accorded a break of any kind. 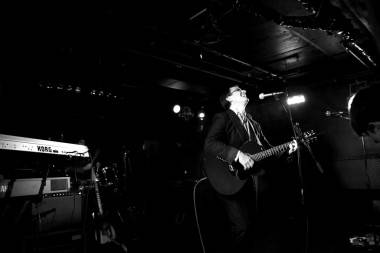 On the Mountain Goats’ last album, The Life of the World to Come, Darnielle took song titles from Biblical verses (i.e “Genesis 3:23”) – try explaining that to a Kid Cudi fan. The band has maintained a medium-size if devoted following, but as far as I know, they’ve never garnered serious interest for a major (not even when there was a music industry). For their latest, All Eternals Deck, they’ve simply traded one indie, 4AD, for another, Merge.

And yet, there they were, hundreds of fans, some of them who looked as though they might not even have been born when Darnielle first started recording, mouthing the words and singing along to the Mountain Goats’ humourous, self-effacing but never angst-y laments. Did the band steal the show from the John Butler Trio at Bonnaroo this year or something? 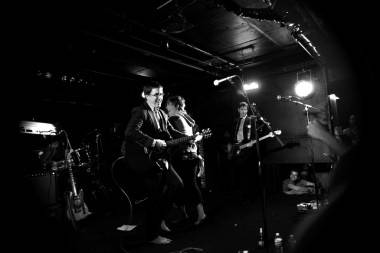 All Eternals Deck is the band’s 13th studio album; “Age of Kings”, one of the new songs performed on this tour (the touring version of Mountain Goats is a more or less solid four-piece that includes Superchunk’s Jon Wurster on drums), is typically Mountain Goats in its tentative opening melody and bull’s-eye chorus and, as always, Darnielle’s literate, precise lyrics.

Maybe a better example of the latter is “Minnesota”, from the 1997 album Full Force Galesburg, also performed last night. It begins:

Audience faves tended to be Darnielle’s more obvious songs, and rightly so; he’s not really a populist but every once in awhile he accesses a broader emotion. The breakup song “Woke Up New”, from the 2006 album Get Lonely, inspired the audience to singalong with the refrain “What do I do/without you”. 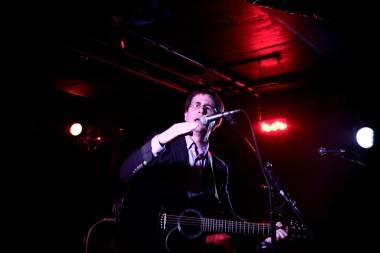 The set-ending “This Year”, with its determined chorus of “I’m going to make it through this year if it kills me”, brought people up onto the stage for a mini (and tame) dance party; “No Children” from 2003’s Tallahassee and its chorus of “I hope you die/I hope we both die”, which was saved for the encore, earned cheers of recognition.

It was over too soon – the Biltmore clears the room for an 11 o’clock dance party on Friday nights – but at the same time the show was just long enough. Next time the Mountain Goats come through town, we might even see them play a bigger venue – the Vogue would be perfect – for longer. Everyone at last night’s show, though, left the venue satisfied, I would think, and warmed by Darnielle’s all-inclusive humanism. And his poetry.

3 responses to “Mountain Goats at the Biltmore Cabaret”