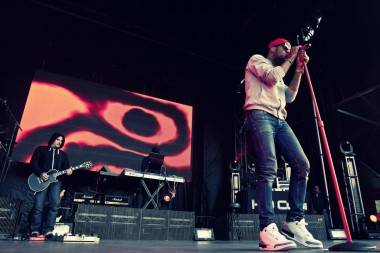 The Kid Cudi show was a great, sweaty night of moshing with elbows, legs, and the occasional teenager.

It was set in a field in Deer Lake Park, in Burnaby, just east of Vancouver proper. With the smell of weed in the air, with girls wearing feathers in their hair and the guys in loose wifebeaters and sandals, the stage was set for what seemed like “Woodstock in 1969”, as Cudi himself pointed out.

Cudi opened his set with one of his stronger tracks, “Revofev”. “Where will you be for the revolution?” rapped Cudi to a frenzied sea of fans. It was a lively beginning which Cudi masterfully segued into the slow, angst-y track, “Scott Mescudi vs. the World”. “This is a journey, into the horizon, hope you can see that”, the soul-searching Cudi sang, as he continued with “Soundtrack to my Life” and “Ghost”. 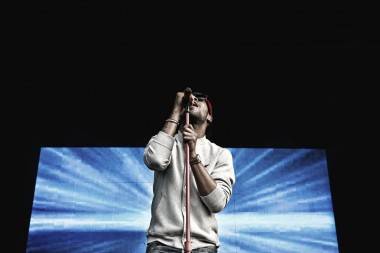 True to Cudder form, the first set of songs really did feel like a journey, arranged similarly to his first and second albums. I could almost hear Common narrating in the background, until Cudi started “Marijuana”, one of the most sensory tracks from his second album, Man on the Moon II: The Legend of Mr. Rager. This cued everyone to start smoking up, and pretty soon, the scent of weed hung thick in the air.

Cudi took the crowd on drugged-up highs and lows. A low occurred when, midway through, the star brought out Cage. Cudi walked off to let Cage, a rapper with whom he’s collaborated on the track and soon-to-be short film “Maniac”, do a solo that can only be described as a watered-down version of Linkin Park’s “In The End”. What came after was even more confusing – Cudi back onstage with a jarring mix of metal and hip-hop, and a cover of Kanye West’s “All of the Lights”.

Although the crowd appreciated the shift back to good ol’ hip hop, a permanent lull had fallen. Even Cudi noticed as he yelled “I wanna see that energy, Vancouver!”.â€¨â€¨ Cudi followed with what he called a “mucho megamix rage” in an attempt to draw the crowd back in. The megamix featured “Mr. Rager” off his second album, and a sample of the ever-popular “Day ’N’ Nite”. Dancing erupted, and for the rest of the night Cudi’s Â rough metal/hip-hop experiment was forgotten. The phenomenal night of weed, sweaty jostling, and freshly cut grass ended with some of Cudi’s most popular tracks,Â “Pursuit of Happiness” and “Sky Might Fall”.

More photos of The Knux: