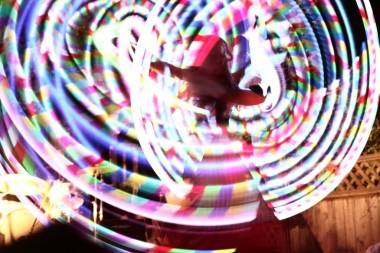 Review and photos – In the House Festival, Vancouver, June 5 2011

Once a year, the In the House Festival weekend showcases what local artists have been doing all year long: performing once a month, rotating to different living rooms and backyards.

Centred around Napier Street and Victoria Drive in East Vancouver, the June festival transforms our private living quarters into public art spaces celebrating community and performance. Now in its eighth year, and with over 60 shows over three days and ranging from live music to dance to theatre, puppetry and more, the performances are original, affordable and highly entertaining.

We spent the day taking in as much art and culture as time would allow, including:

The LatÃ­n world of sensual rhythms and inexhaustible energy took us on a journey, if only briefly, in this backyard extravaganza.

Playing to a crowd of about 30 people in the heat and sun, Tambura Rasa immediately transported us to the Mediterranean with the sounds of their Spanish guitar, gypsy violin and Afro Latin percussion. Imagine travelling on a boat, with music playing as pirates give chase and women in flamenco costumes dance on board. Our only complaint was that the whole backyard was filled with chairs, but these were eventually cleared away so that the music could be experienced the way it should be experienced: by dancing. Rousing staccato beats and a cameo appearance by a belly dancer had people up off their feet.

Next, an improvisational 10-minute dance routine by Baila Vancouver Dance School demonstrated what rhythm looks like. Led by director Nina Perez with a male partner, the duo’s sensuality raised the sexual tension in the backyard garden enclave.

Rumba Calzada headlined the segment. The Latin jazz/salsa group has collected numerous awards during their 15-year career. Now that the chairs had been removed, the dancers in the audience rose up, to relish in the lush, provocative rhythms of precise, experienced musicians, who encompassed the passion that is integral to Latin music. 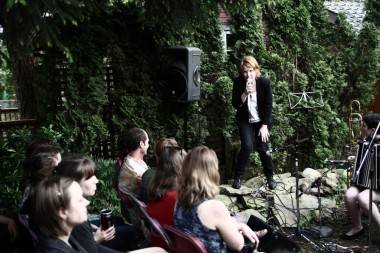 Wintermitts at the In the House Festival, Vancouver, June 5 2011. Anja Weber photo 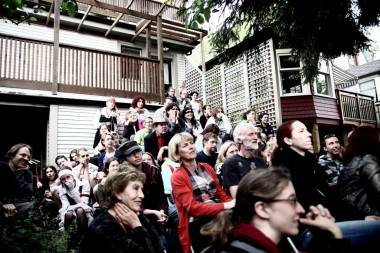 Audience at Wintermitts at the In the House Festival, Vancouver, June 5 2011. Anja Weber photo

Experimental puppetry by the Lost and Found Puppet Co. came together with Dixie Star Storytelling in this children’s afternoon show. The puppet show’s script mixed French and Latin phrases, which seemed a little complicated for the kids under five. A bad real estate developer crossing paths with talking flowers, getting lost in the forest and eventually getting beheaded had some kids laughing at the same time others were crying. The developer, upon being resurrected and changing his mind about environmental policy asked the audience, “I lost my head, am I losing my mind too?”

The puppets seemed homemade by the actors themselves, and included a stick skeleton and an umbrella made into a talking flower with tufts of cotton glued to the outside. The backdrop looked like a few sheets sewn together, with felt and spray paint creating a forest scene. More often than not we were left trying to figure out what they were supposed to represent rather than admiring their craftsmanship.

Dixie Star Storytelling came on next and enlivened the atmosphere, and gave kids a chance to interact with the performers. They waved scarves and stomped feet on cue. Lisa Sars told the story, while baritone saxophonist Tim Sars, and bass-player Wynston Minckler provided musical accompaniment. At the end the musicians played a few extra songs that got the kids dancing. 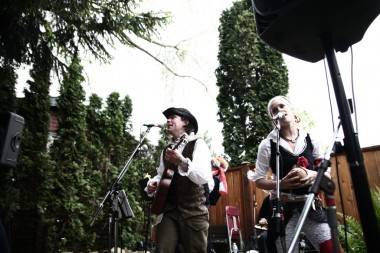 Blackberry Wood at the In the House Festival, Vancouver, June 5 2011. Anja Weber photo

A slew of musicians, including King Ore, Olo J Milkman, David Gowman, Sacha Levin, Curtis Mathewson, and The Mythical Man collaborated to provide what was equal parts steampunk revival; experimental, noise, drone music; and pagan-esque drum circle in this backyard. Instruments included several computers, bongo drums, a xylophone and a few instruments that were either hand-made or repurposed everyday objects. The centrepiece of the performance area was a furnace that had once been installed in one of the musician’s houses. They banged on it like a drum, as smoke sporadically poured out, and wafted into the audience. During a quick intermission, the group handed out punch to the audience only to announce after that we had all “drunk the Kool-Aid.

At moments, the musicians would step away from their instruments, and let the computer take over, leaving the audience to wonder whether the performance was done.Â  At the actual end, they had to tell us that, indeed, they were done playing. Patrons were invited to toot the hand-made horns on the way out of the backyard.

Four shows in one day can be tiring, but it was worth it to make it to the weekend grand finale. Blues Circus, a blend of theatre, talent show and blues music made for an impressive performance. The story started with a history lesson about the transcontinental railroad and Chinese involvement. Then our beloved but dumb-witted protagonist hopped a train, not knowing that it was a circus train. Without a marketable skill, he sold his soul to the devil in exchange for 10 years as a star performer in the circus.

The narrative was well-written, compelling, funny and witty; the acting of professional quality; and the circus acts, which included juggling, hula hooping, Chinese yo-yo and gymnastics, wowed the audience.

Without giving away the story, it even came with a moral at the end: “If our myth shines any truth tonight, it is that our greatest struggles are only with ourselves.” 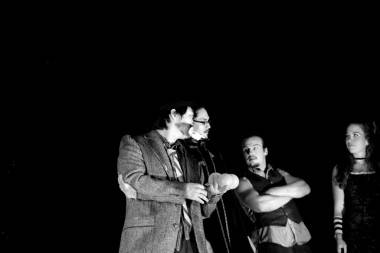 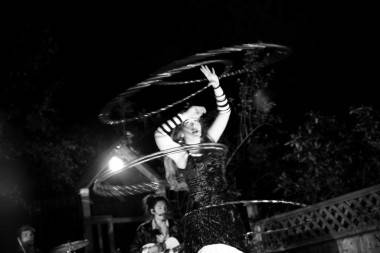 More In the House photos: