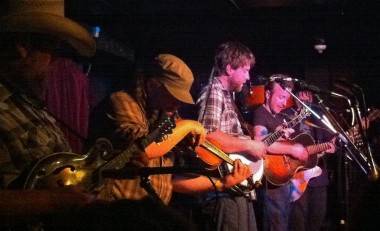 Trampled by Turtles at the Media Club, Vancouver, May 14 2011. Carrie Swiggum photo

Trampled by Turtles brought their Midwestern, toe-tappin’, pogo dancing, slow romance, sometimes frenetic tunes to the Media Club this past weekend in Vancouver.

The folksy bluegrass band from Minnesota has garnered acclaim for its live shows, making a name for themselves by touring relentlessly. Esquire recently included them in an article,Â ’15 Great Bands We’d Never Really Heard of Before SXSW’ -Â Â their 2nd year in the Austin music festival lineup. On tour with their 2010 release, Palomino, the Media Club show marked the first time Trampled By Turtles has played in Vancouver since forming in 2003.

A five member outfit that includes banjo, fiddle, mandolin, bass and guitar in their repertoire, Trampled by Turtles‘ live show sometimes belies the presence of a drum set or synthesizer in the band’s ability to rock out and carve a strong, often fast, beat. After demonstrating the quick hands and impeccable coordination that they’re known for, the band also took the tempo down for a few songs – but that didn’t zap the energy in the intimate, sold-out setting.

The show mixed tracks off the new record with old favourites, like “Codeine” which debuted on their 2005Â Devil and the Blue Sky album.Â Singer and songwriter Dave Simonett crooned about heartbreak and self-medication, while audience members hopped up and down like they were on crack cocaine. 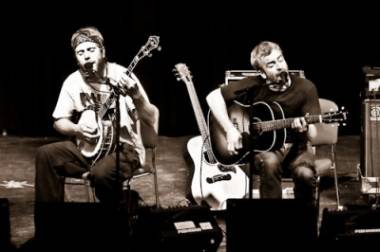 If you’re thinking these guys sound like a jam band, flannel-wearing Phish wannabes, take that straw out of yer mouth, cause this ain’t no typical hippie show. Okay, three out of five band members were wearing plaid flannel under their bushy beards, but looks aren’t everything. They’ve been called progressive bluegrass, folk and indie, but a recent critique dubbed their tunes more “rock-grass” or even “punk-grass”.Â  A Minneapolis alt-weekly describes them as “One of very few bands in America that are hipster-approved but could heave a room of strangers into a hoe-down at any time…”

Influences include a wide range of artists, from Wu Tang, Black Sabbath and Neil Young. Maybe that’s why it’s hard to label their sound. There’s something for everyone. Yet their melancholy melodies and sometimes dark lyrics, such as in the song “Codeine“, keeps the mainstream at bay.Â

Tracy Roach, a long-time fan who travelled from Minnesota, said going to TBT shows is like her version of being a Deadhead. She’s been all over the U.S. and now in Vancouver. “You have to see them live,” she said, to get the full experience.

The band plays to sold out shows in California this week before heading back to the Midwest this summer to begin the music festival circuit.