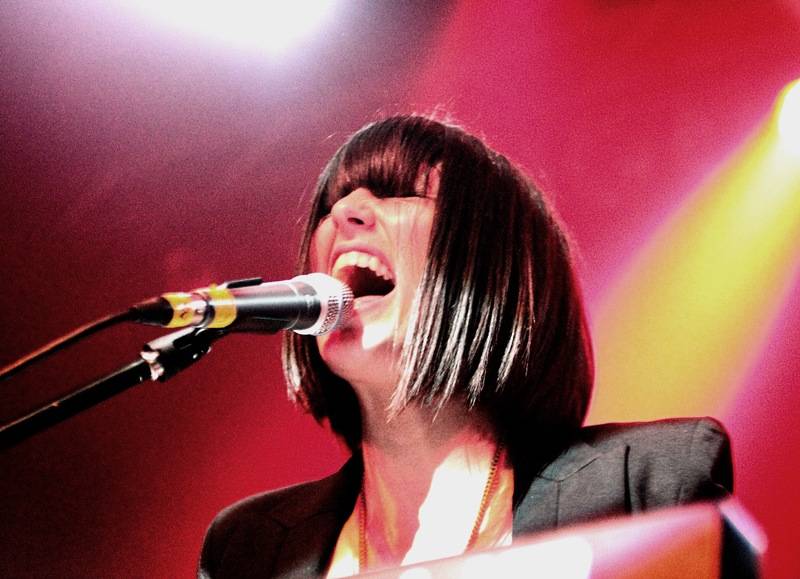 Review and photos–Phantogram at Venue, Vancouver, May 20 2011

Just as the sun began to set, hundreds of newly-tanned fans started crowding into the dark confines of Venue to see Phantogram.

Vancouverites had their first live taste of the electro-duo when they supported Metric at the picturesque Malkin Bowl last June. Now headlining their own tour, Phantogram made it clear that the training wheels have come off, and they’ve established their own loyal following.

They were one of the hottest tickets at this year’s Coachella, have been featured on numerous late-night talk shows, and have toured with some of the biggest names in indie rock, including The xx, Ra Ra Riot and Caribou. After watching them this evening, I realized that all the publicity and accolades are well deserved. Their reputation was not overhyped at all; their live set definitely brims with vivacity and originality.

Playing irresistible tracks from their debut album Eyelid Movies, Sarah Barthel and Josh Carter perfectly blended art-rock, hip hop, electronica and dream pop in each of their compositions. It’s probably this versatility that attracted a diverse audience to the show; jocks, scenesters, artists, yuppies and nerdy undergrads – all united on the dance floor in support of the Saratoga Springs, NY band.

As Phantogram opened with the trip-hop-y “As Far as I Can See”, Barthel was the picture of sophisticated cool, her dark, blunt bob swaying as she bopped along to the infectious beat. On “Let Me Go”, her sweet, airy vocals brought out the romanticism of the shoe-gazing track. One of the more subdued songs on the LP, it surprised with the high level of energy put into its live performance.

Of course “Mouthful of Diamonds” caused a substantial amount of hollering and whistling in the crowd. I was amused to hear a scruffy, drunken gentleman declaring “Dude! This is totally my song!” At that point, the party was in full swing.

Carter took his turn on lead vocals with “You Are the Ocean and I’m Good at Drowning”. The track brought to mind the ethereal vibe of Blonde Redhead, especially their song “Everything is Wrong”. I did find that the mic levels were slightly off, and Carter was barely comprehensible at times.

Phantogram got a little rough and gritty with “This is the Future”, one of their newer drum-heavy tracks that brought in some sci-fi sound effects. “When I’m Small” sounded impeccable live, Carter’s rhythmic guitar riff solidifying the track. But the subdued performance of “10,000 Claps” was absolutely captivating. The solemnity that Barthel brought to the song was incredibly moving – it was almost as though she was leading a vigil with her vocal phrasing.

In the sea of artsy electronic bands out there, Phantogram definitely stands out. I was pleasantly surprised by the amount of charisma they brought to their live set and would probably pay for the overpriced festival ticket just to catch a glimpse of them again in the future.