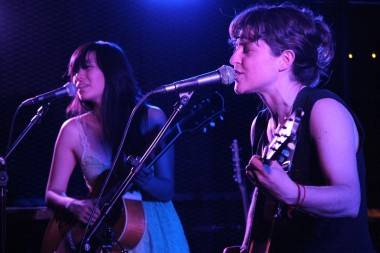 Review and photos – Thao and Mirah at the Biltmore Cabaret, Vancouver, May 5 2011

I guess I wasn’t the only one who thought Thao and Mirah was a hard sell. Not a whole lot of people turned out for the duo’s Thursday night Vancouver show. Those who did, though, were pretty pleased.

Normally, Thao Nguyen is the lead singer of Thao with The Get Down Stay Down, while Mirah Zeitlyn has a number of solo releases to her name, along with a few collaborations. Both are San Francisco-based and, last year, toured together before recording an album. Thao + Mirah, released last month, was the result. 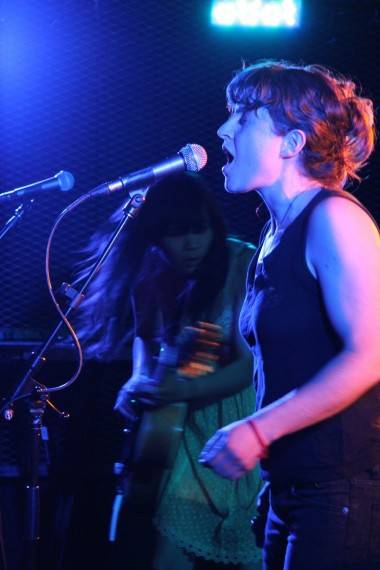 Like the record, the show benefited from the chemistry between Thao’s slightly more quirky musical leanings, both percussively and guitar-wise (she’s an exceptional player), and Mirah’s more traditional folk-based pop influence. The two styles, as well as their harmonies, transform each other’s work into Thao and Mirah hybrids. And the comraderie between the lanky, slightly awkward (at least, between songs) Thao and the more self-assured Mirah made the between-show banter almost as enjoyable as their harmonies. Both had a good laugh while Mirah recounted the quizzical reaction of a border guard who seemed to find it hard to believe that a whole band was made up only of women. Mirah reported the tour manager’s response: “Dude, it’s 2011.”

I’m not familiar enough with Thao’s music to say whether any Get Down Stay Down songs were played, but the two definitely delved into Mirah’s back catalogue for the song “Jerusalem”, one of the best-known songs off her 2004 album C’mon Miracle. 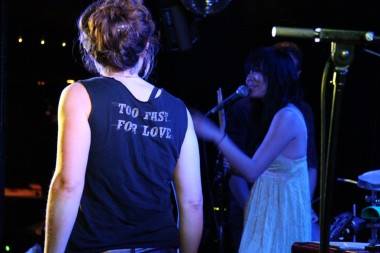 Both openers were excellent as well. Under the name Led to Sea, Seattle musician Alex Guy opened with songs for solo viola and voice from her album Into the Darkening Sky. Guy, who sometimes plays with Laura Veirs and plays viola with Thao and Mirah’s touring band, looped her instrument at times to layer the songs, most of which sounded like they’d been composed under, as the album title suggests, darkening Pacific Northwestern skies.

But the night’s biggest and best surprise was Sallie Ford and The Sound Outside. The Portland quartet (voted Best New Band for 2010 by Willamette Weekly) has a winking, knowing attitude towards swing, roots rock and rockabilly, an attitude and sound which almost immediately transformed the laidback Biltmore into a dance party. Ford also has a big, versatile voice, and the songs to match; look for the band’s debut full-length, Dirty Radio, to be released later this month (May 24) on Partisan Records.