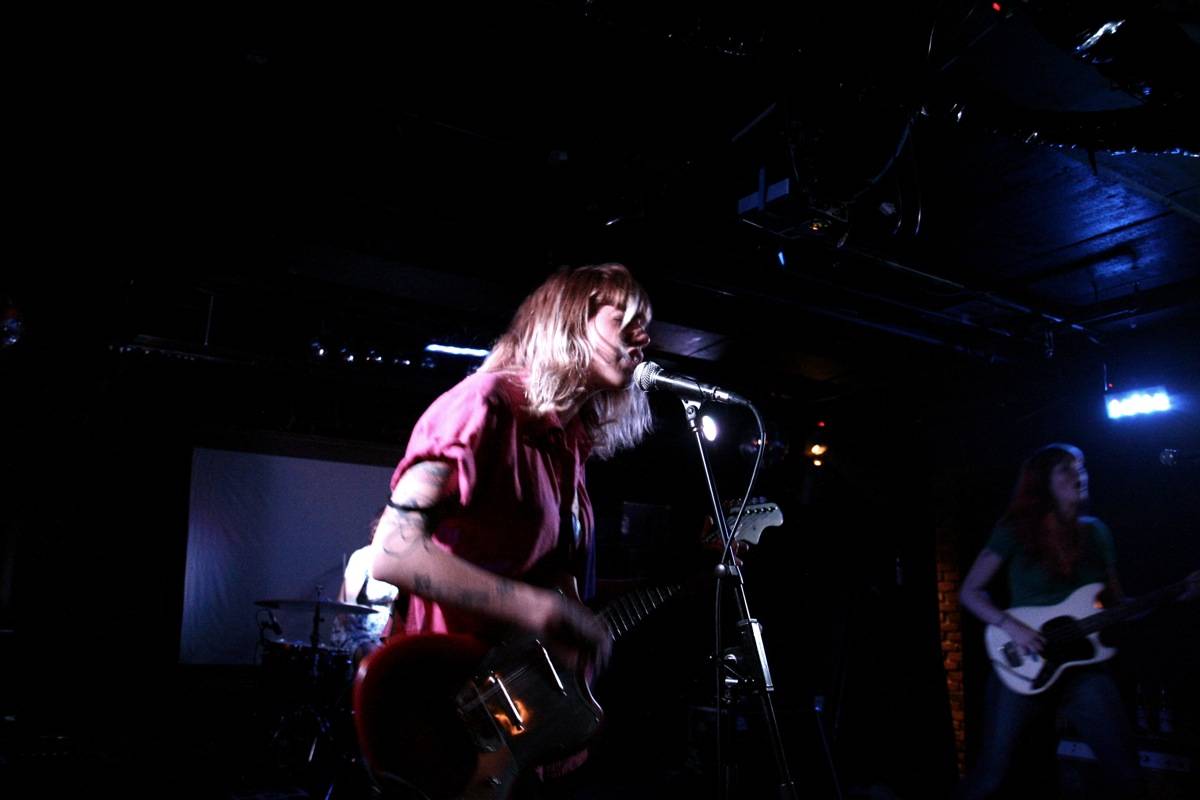 Review and photos – Vivian Girls at the Biltmore Cabaret, Vancouver, May 7 2011

Onstage at the Biltmore Thursday night, Mirah of Thao and Mirah mentioned a border incident. On their way into Canada for their show here, she and her bandmates were greeted by a customs official who seemed flummoxed at the idea of a group consisting solely of women. According to Mirah, the tour manager responded with “Dude. It’s 2011.”

It is indeed 2011, and the past week in Vancouver has seen a particularly strong showing of female-fronted bands. The music industry might not be the equal-playing-field utopia Babes in Toyland and L7 (to pull two ’90s names out of a hat) might have envisioned, but look at this lineup: the Merrill Garbus-led tUnE-yArDs last Saturday night; the Corin Tucker (formerly of Sleater-Kinney) Band Sunday; Zola Jesus Tuesday; Thao and Mirah Thursday; and tonight (Sunday) The Kills. Not to mention the singer/songwriter Jessica Lea Mayfield on Wednesday night, as well as two nights of The Pixies (with bassist Kim Deal) and also two nights of local coed band Mother Mother.

Last night’s Biltmore bill gave us two more examples of how, at least for indie-rock fans, the idea of an all-girl band is just another Saturday night. Brooklyn trio Vivian Girls, a hard-touring act now on their third album (and at least their third Vancouver show), take their name from the heroines of American folk artist Henry Darger‘s magnum opus In the Realms of the Unreal (Darger is definitely worth a look on Wikipedia if you’re unfamiliar). Their sound is garage-y, abrasive – lead singer Cassie Ramone sings in a kind of monotone favoured by post-punk British bands like Au Pairs – and just this side of catchy.

At least, to these ears; I listened in vain for a really strong hook during last night’s set, but in the end had to content myself with the trio’s actual performance. Fortunately, this kicked into high gear midway through, and though the songs didn’t quite do it for me the group’s energy (not to mention a thrashing punk cover of Green on Red’s “Sixteen Ways”) brought me back to the show when my attention started wandering. An encore of two short, brutish tunes finished the set before the venue switched into its Saturday night dance party mode.

Perhaps the Vivian Girls’ set seemed slow to start because of the intensity of the opener still resonating in the room. No Joy from Montreal attacked their brand of ’90s shoegaze-y noise with ferocity. The twin electric guitar maelstrom of lead singer Jasmine White-Glutz and co-founder Laura Lloyd gelled with the (male) rhythm section’s rumbling for a beautiful chaos; and though they rocked with a single-minded determination on the faster songs, the quartet sounded best on the more lush, mid-tempo numbers.

My girlfriend was left unimpressed, however. “Would you have liked them as much if they were guys?”

Well, probably not. But then, if they were guys, they wouldn’t be No Joy.