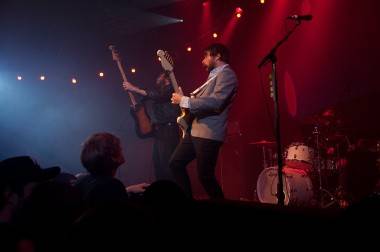 It’s a strange phenomenon, butÂ  every time I mention Peter Bjorn and John in conversation, I receive the exact same response: “Oh, the guys with the whistling song?” (more formally known as “Young Folks”). At last night’s show at Venue, the versatile pop-rock group proved that they’re no one-hit wonder, but yes, they are very adept whistlers.

The bulk of the Swedish trio’s energetic set was comprised of embellished pop-rock songs from their latest record, Gimme Some. As the show unfolded, each piece seemed more infectious than the former, which caused escalating action on the dance floor. Frontman Peter Moren and bassist Bjorn Yttling led the action with their frenzied sliding and jumping on stage. 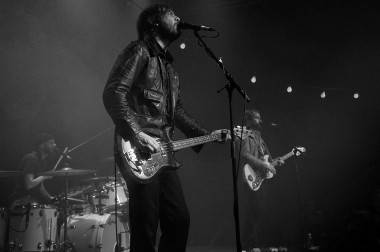 Opener Bachelorette (the stage moniker for Annabelle Alpers) caused some hubbub amongst the scenester crowd earlier in the night with some more unruffled electro numbers. Maneuvering multiple laptops and synthesizers simultaneously, Alpers created compositions that balanced her airy vocals with a digital background. Her most noteworthy track of the night had to be the dreamy “Sugarbug”, which chanelled the romanticism and sultriness of bands like Zero 7 and Twin Sister. The aforementioned can be found on her latest self-titled record which will be released on May 17.

A monotonous techno beat and strobing lights signalled the beginning of PB&J’s set. Blacklights exposed a fingerprint pattern on the band’s “three thumbs up” backdrop (the album art for Gimme Some); just one of the fun little surprises that the group had in store for their fans. You couldn’t help but feel giddy from the slightly cheeseball “Eyes” and “Dig a Little Deeper”. The bearded brood encouraged the liquored up audience to brazenly sing along to the soccer chant sounding refrain of the latter. Drummer John Erikkson showed incredible composure while taking lead vocals on one of their vigorous punk-influenced tracks. With tight harmonies, perky melodies and genuine enthusiasm, PB&J successfully charmed the pants off their Canadian following. 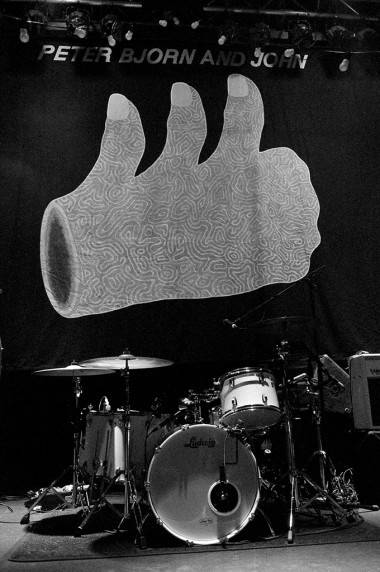 Caught up in the vibrant atmosphere, I couldn’t believe how late it was by the end of their encore. I left the crowded and steaming theatre with a strengthened respect for Peter Bjorn and John; here’s a group that perfectly marries the light-hearted and simple sentiments of classic pop with the innovations of modern electro-rock. PB&J satisfies anyone with a taste for playful and catchy music. Plus they come complete with all the bells and whistles.