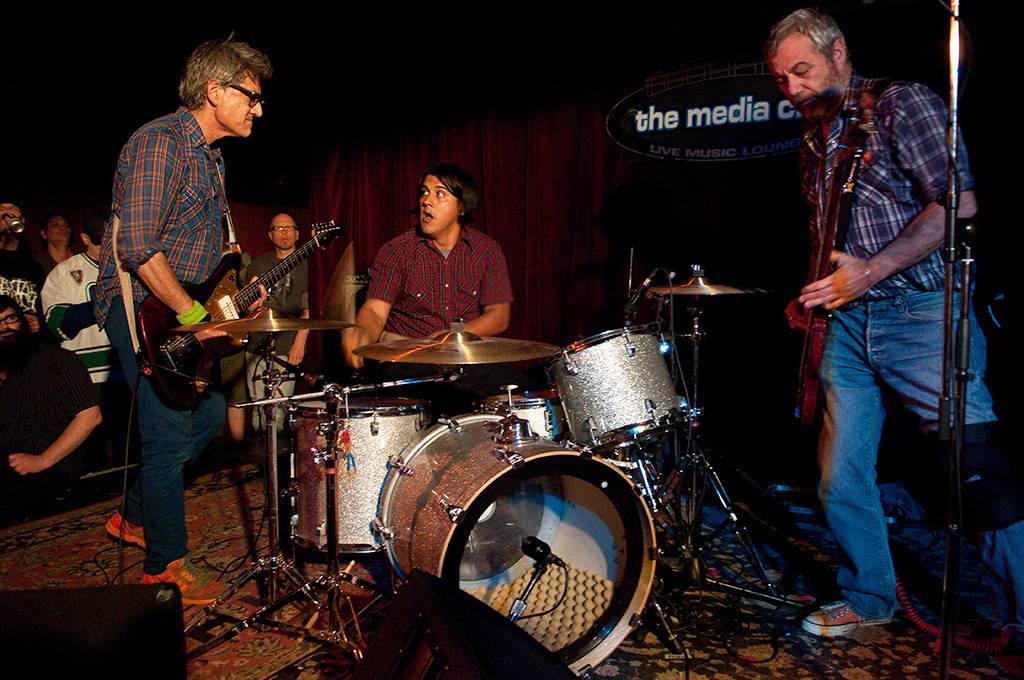 Mike Watt at the Media Club, Vancouver, April 26 2011. Ashley Tanasiychuk photo for Scene in the Dark.

First, you must understand: original-SST-family-member, Minuteman, punk/post-punk-elder-statesman, bass-hero, member-of-the-Stooges or no, nobody – I mean NOBODY- was playing a note tonight until the Canucks trounced the Blackhawks first.

Not like I’m some stickler for rock shows starting on time (ha! cue longstanding disappointment!), but it was indeed at first a little odd to walk into the rock club only to find all eyes in the room facing 180Â° away from the stage, locked on the twin TVs over the bar. As I’m not much of a hockey fan, I did hope that this white-knuckled, quarterfinal Game 7 wouldn’t cut too sharply into opener the Ford Pier Vengeance Trio’s set time – and spotting the fedora’d Mr. Pier pacing about the room, I had to wonder if he was thinking the same thing.

As Chicago tied the score with less than two minutes left in the third, plunging the game into overtime (dammit!), I sincerely hoped the Trio would get to play longer than ten minutes. Luckily Vancouver shut the Blackhawks down five minutes into sudden death, and the packed Media Club roared in victory. All I can say is, thank hell the Canucks didn’t lose, because I don’t know if the night’s vibe could have been recovered after a loss.

Alas, finally the goddamn rock show could commence! “So,” Ford Pier leered at the crowd from the stage, “anybody see any good TV lately? This [set] is dedicated to the Canucks… Phoebe Snow… and Poly Styrene.” [Both Snow and Styrene passed away the day of the show. – Ed.] The trio then proceeded to let rip with a fantastic set of what they do best: angular avant-rock that nestled somewhere between NoMeansNo and the Jesus Lizard, but with an occasional tangent off into alt-country-rock territory.

Regardless of whatever sounds-like-this simile I come up with, the bottom line is Ford Pier’s Vengeance Trio rocked their collective ass off. I’ll confess to being a newbie to the trio’s mighty sound, but after seeing them bring the house down this night, I’m a devoted convert now. Especially impressive: the band’s showstopping final number, seemingly played entirely by feel, with Pier barking off-mic countoffs to his bandmates cueing massive, bombastic choruses that eventually careen drunkenly into an earth-shattering climax. Well worth the wait, the Ford Pier Vengeance Trio cemented their reputation as truly unsung heroes of Vancouver indie-rock. For me, their set was a fantastic introduction, and I look forward to seeing them again.

Waiting, waiting… by the time The MissingmenÂ proceeded to get set up, I expected to see their leaderÂ lurking around the venue. After all, it’s not like the Media Club is huge. But Mike WattÂ was nowhere to be seen. Smooth jazz kept playing over the PA, minutes ticked by, the floor kept packing with people, and the Missingmen were at the standby, clearly ready to play. All of a sudden, in the midst of the packed floor, I feel a hand on my shoulder – a polite excuse-me tap. I look over my shoulder and it’s him – the Watt, making his way past me and everyone else to the stage, bundled up in a winter jacket, bass slung across his back. He mounts the stage, loses the parka, out comes the bass, strapped on over the flannel, plugged in, and we’re a go.

On tour to promote his latest album (self-referred to as his third ‘punk opera’), hyphenated-man, Watt spieled to the gathered crowd that we’d be treated to the new album in its consecutive entirety; The Missingmen then proceeded into the loping opener “Arrow-Pierced-Egg-Man”.

Immediately I’m struck by the intense interplay between Watt and his phenomenal drummer, Raul Morales. Morales is a dynamo – fluid, all over the kit like a drunkard, yet so dime-stop precise. He and Watt have a serious bond as the rhythm section, mostly playing to each other – through various subtle eye-cues and head-nods – as the songs gradually get more and more intricate and frenetic.

Don’t get me wrong –Â  guitarist Tom Watson is no slouch, bringing as he does a whole other manner of intensity to the table (especially in his snarly lead vocal parts). But at first, his guitar kinda exists off in its own world, while the bass and drums coexist in their own separate realm. Somewhat later in the set, Watson & Watt share their own tÃªte-Ã -tÃªte and play off of each other, leaving Morales to steer the ship with his frantic, lopsided beats. The rock-prog-jazz-math-beat-poetry of hyphenated-man runs all over the map, at times beating the listener over the head with outskirts-of-post-punk loud, at others soothing with gentle calm and cool quirk-jazz. And even though I saw the trio play those ridiculously-intricate songs with my own eyes, I’m still slackjawed at how they managed to play them with such flawless execution. 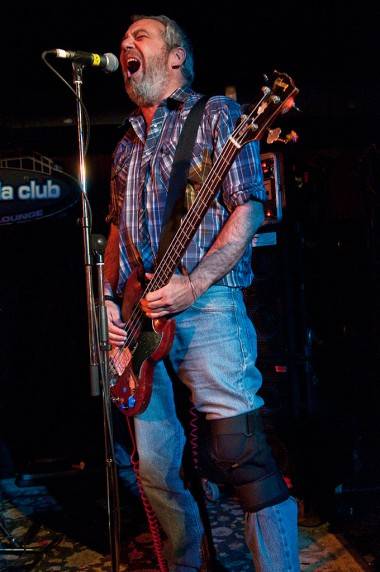 Mike Watt at the Media Club, Vancouver, April 26 2011. Ashley Tanasiychuk photo for Scene in the Dark

Still – as eye-buggingly impressive as hyphenated-man was in all its glory, it was the encore that really got the crowd going.

Comprised of faves from the Minutemen’s 1984 classic SST album Double Nickels on the Dime, the encore brought us “Toadies”, “Black Sheep”, “The Glory of Man”, and finally [I’m pretty sure] “Anxious Mo-Fo” to bring it all down to a perfect close.

Whether it’s been with the Minutemen, fIREHOSE, Dos, his solo albums – even his work with the latter-day Stooges – Watt has always made vital music. But it took seeing it performed live by his incredible (there’s no other word to describe them) Missingmen to remind me just how vital it remains. In all, a solid night of post-punk-plus for maturing hipsters, and even a killer hockey game (I guess) to boot.