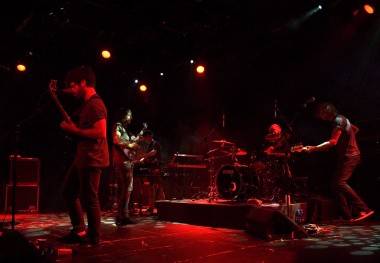 Review and photos – Foals at the Commodore Ballroom, Vancouver, April 10 2011

Foals played to a sold-out Commodore Ballroom on Sunday night, not even six months after playing a three-quarter full Venue back in October. With no new release and a venue twice the capacity this was quite the feat, and also demonstrative of the Uk dance-rock quintet’s recent rise to mainstream popularity.

Outside their native Britain, where they’ve been a household name since 2008, it’s taken the group some time to get a toehold, but now they’re here and everyone knows it. This was definitely apparent in the diverse crowd they pulled: from the Skins tween set to the Main Street uber-hipsters, the music bloggers to the 40-something dads that listen to BBC 1, everyone was getting down to the sound of Foals. 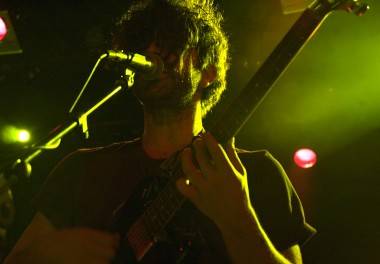 They surprised us bu starting off with a slow burn, giving a thorough taste of the new album in all its beautiful sonic richness, lulling us into futurist soundscapes and down into the depths of singer/lyricist Yannis Philippakis’ sensitive, brooding melancholy. It started on a mellow vibe for sure, but it was devastatingly beautiful and a side of Foals I’d never seen before.

They brought the funk on a couple of the newer numbers, “Miami” and “Blue Blood,” but in a decidedly understated way – especially when you’ve come to expect a full-on assault of frenetic syncopated drums and math-rock style bleeps and bloops. The math-rock influence is still there, but more layered and textural, with guitar lines intertwined and blending rather than punctuating and percussive.

“Spanish Sahara” was absolutely mesmerizing, with about four minutes of hauntingly delicious, heart-wrenchingly plaintive vocals up until the drop when everyone lost the plot. There were arms and legs flying, people crowd surfing, bottles and cigarettes tossed in the air, and Foals kept bringing it. 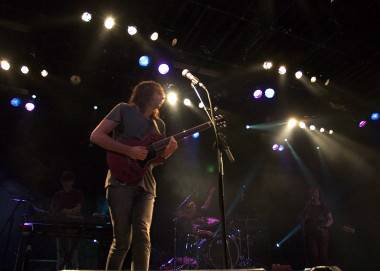 And from there on it just devolved to… how shall I put this? Typical rock band shit-raising. If you’ve seen Foals before you know Yannis likes to get worked up, throw some shit, jump off shit, no big deal. But I guess he was also pretty pissed off that about 100 people left early, so he was a little more hardcore than usual; he threw a mic stand into the crowd, jumped off the cabinets and sprayed the front row with water.

This is a hot child with some attitude (and maybe the tiniest chip on his shoulder?). I too would be a little testy if people left an hour into my set, but alas, it was a Sunday night with a late start time and people had Monday morning on the brain. I think we can forgive him his little tantrum. Even with the attitude, he is still hands-down the sexiest man in rock and roll right now. And I’ve never seen anyone jump off the stacks at the Commodore (or the balcony at Venue, for that matter) so he can pretty much do what he likes.