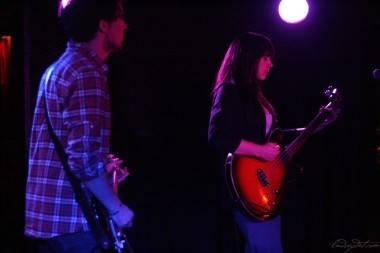 The Velopalooza festival is a “two-week celebration of bike fun” that takes place in Vancouver in the month of June, and is now in its second year. I hadn’t heard of the festival, and I’m not much of a cyclist myself (something that’s slated to change this summer), but since I was familiar with all of the groups on the bill for the March 26 Velopalooza fundraiser, I headed down to the WISE Hall in East Vancouver to check everything out.

Appropriately adorned with patterned, multi-coloured bike wheels and low-light chandeliers, the room was just starting to buzz by the time opener T. Nile took to the stage at 9:30 p.m. Her sound is a charming blend of acoustic guitars, banjos, pedal steel, and sweet-sounding yet expressive vocals, and the mostly-seated audience hummed along and tapped feet approvingly.

As was the case with each of the night’s performers (save Mode Moderne), the drums were somewhat muffled in comparison to the rest of the mix, and the overall sound was decidedly “hall-like” (read: a bit cavernous and washy).Â  For her part, Nile was a gracious and pleasant frontperson; she thanked the audience repeatedly, as well as the organizers of the event.Â  I would have liked to see a livelier performance from her backing band – however, this is the type of music that speaks for itself, and stage antics/shenanigans aren’t really necessary.

Characterized by a) amazing retro outfits, b) a propensity for hi-hat driven beats, and c) wicked synth sounds straight out of 1982, Petroleum By-Products are unabashed in their love of all things new-wave, with some old-school, trashy punk thrown in for good measure.

Speaking to the band after their set, I found them to be an upbeat, conversational bunch (always a bonus!). Lead singer/synth player/hot package Sally Jorgensen was particularly animated and bubbly offstage; however, onstage, from behind her keyboard, I felt that she was somewhat constrained and could have fostered a stronger connection with the audience had she been able to move about freely. Nonetheless, bolstered by a quirky-cool performance from Vanessa Turner on bass, PBP held my attention and definitely made we wish I hadn’t sold my early-80s Korg DW-6000 synthesizer last summer.

As Mode Moderne, the night’s third act, charged into material from their album Ghosts Emerging, a collection of moody, atmospheric, and utterly Joy Division-inspired songs, a thought sprang to mind: as much as the Vancouver indie scene is in DIRE need of a return to good old-fashioned showmanship, certain bands actually win fans over WITH their non-stage show. These bands’ seemingly uninviting nature, to some people, is actually inviting.

This was definitely the case with Mode Moderne, whose front-of-stage members gave off distinctly disaffecting, forlorn vibes. As he sang in ominous low tones, frontman Phillip Intile stared out into the dimly-lit room, entranced, eyes opened wide, occasionally casting his gaze downwards and brushing his dark hair from his forehead.Â  It’s not an overly original act, but it certainly suits the band’s music.

To their credit, the band’s rush of the jangly guitars, the emphatically-picked basslines, and the occasional wave of dreamy synth (courtesy of Becca from the band Student Teacher) coalesced into a nicely urgent and somewhat distressed-sounding mix. Their set ended with a classic knob-twisting delay pedal noise freak-out, and the crowd of onlookers was suitably impressed.

Last up was local singer/songwriter/reformed pop star Louise Burns. After a couple of years of flying somewhat-under-the-radar since her departure from the Juno-nominated group Lillix, Burns has re-emerged with a solo record, Mellow Drama, out April 5th on Light Organ Records, and a new band, The Moonshiners, who performed with her onstage at the Velopalooza fundraiser.

From her ’50s rock ‘n’ roll throwback single “What Do You Wanna Do?” to her lovely and affecting cover of Leonard Cohen’s “The Gypsy’s Wife”, to the nearly Courtney Love-like pop balladry of “Paper Cup”, the new album covers a variety of styles, and the Moonshiners did a good job of bringing those recorded elements to life onstage (the live percussion was appropriate, and the guitar playing was tasteful).

I enjoyed Burns’ cool, demure onstage persona and her side-to-side sashaying as she sang and played guitar was almost charmingly reminiscent of early-60s Motown moves, but I have the feeling she and the Moonshiners will have to work at really engaging audiences in order to become a live act with staying power. I’m looking forward to checking them out again at the Waldorf on April 5th for the Mellow Drama CD release gig.