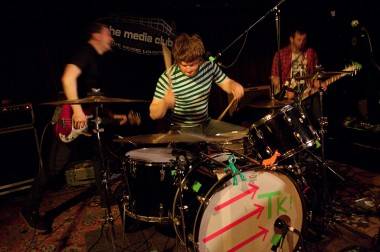 Review and photos – Telekinesis at the Media Club, Vancouver, March 27 2011

Frantically trekking around North America for the past six weeks has not shown any effects on Telekinesis‘ stamina. The Seattle-based band nearly brought down the Media Club’s roof last night with their brand of high-powered geek rock. It was the last show of their tour, and they made sure they’d go out with guns blazing.

The night was off to a mellow start with supporting acts Callers and Wye Oak. Due to some hold-ups at the border, Wye Oak arrived a wee bit late (and quite flustered), prompting the Callers to hit the spotlight first. The soft-spoken trio put on a calming set of jazzy, abstract rock numbers from their first record. 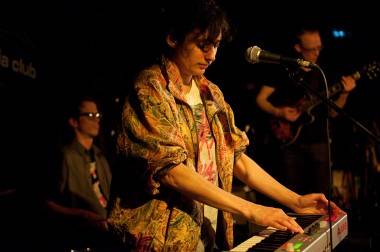 Vocalist Sara Lucas‘ dark and velvety tone perfectly complemented all the blue notes guitarist Ryan Seaton grazed. Drummer Don Godwin picked up the tempo with a SoCal hip-hop beat on “Life of Love”, the title track of their freshman LP. Lucas showed a quiet confidence through her swagger and breezy dance moves, while her compadres looked equally absorbed in the music. However, a little more crowd engagement would have gone a long way for this Brooklyn group.

Upset over her band’s tardiness, Wye Oak frontwoman Jenn Wasner apologized profusely to the venue managers and the audience before giving them a taste of the duo’s psychedelic folk compositions. “Holy Holy” boasted echoing and levitating harmonies accelerating into a distorted throwdown. 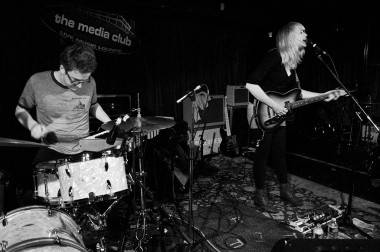 Drummer Andy Stack would have impressed the most dexterous multi-tasker with his ability to keep a complex beat, tickle the ivories of his keyboard and provide vocal harmonies, all with a Zen-like expression on his face. After (understandably) breaking a string while shredding guitar on the latter track, Wasner switched over to her spare and retuned in a frenzy. She confessed that she’d had a bad day, dealing with border authorities, fighting a cough and cold (the duo had to cancel a show in Memphis just a week prior due to illness), and had been sitting in a van for 12 hours with little space and food. The crowd wouldn’t have known it by the amount of raucous energy they put it into their performance.

Michael Benjamin Lerner of Telekinesis took a break from mingling with his friends in the crowd to set up his drum set and adjust his microphone before booming through 90’s-punk-sounding numbers off their second album, 12 Desperate Straight Lines. Dealing with a devastating break-up and temporary deafness in one ear caused Lerner to write grittier and aggressive songs, veering away from the “super-pop” tracks on their debut album. He seemed to take out his frustration on his kit, sweating bullets by the end of their second song. 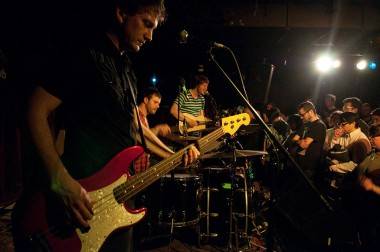 Throughout the night, the audience banged their heads to resentful anthems like “50 Ways” and “I Cannot Love You”. But even with bitter lyrics like “You never get things done, and I think you’re lazy”, Lerner and fellow band members Jason Narducy and Cody Votolato strangely held the widest smiles on their faces. At times, all three men sang into the same microphone, arms over each others’ shoulders, celebrating the end of their musical road trip. It seemed like Lerner finally found catharsis after his recent rough patch.

Halfway through the show, Lerner invited questions from the audience. An eager gentleman in the front row posed, “What would you bring in a time capsule that would be launched into space?” After much consideration, Lerner replied, “A copy of Justin Bieber‘s My World Version 2.0“, Rebecca Black‘s controversial disaster “Friday”, a bag of pistachios and the Huffington Post.

The rest of Telekinesis’ set showed as much variety as their care package to the Milky Way. They managed to cover Guided By Voices and Teenage Fanclub, and to close the show with their own “Coast of Carolina”, a good ol’ singalong that got Lerner’s dad (and tour driver) Vince banging a tambourine on the stage, while fans shimmied next to the band and the Callers and Wye Oak provided backup vocals. Lerner proved that it’s easier to get through the heartache if you’ve got a good rhythm section and an enthusiastic audience on your side.