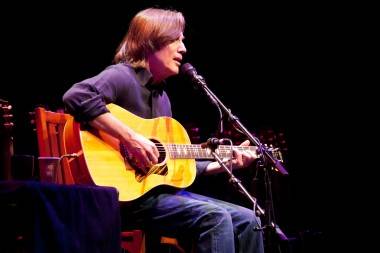 Last night’s Jackson Browne concert was definitely one for the fans.

That is, if you didn’t know the songs, which dated back to his 1973 debut, odds are you were going to be bored, sleepy or both.

With no backup musicians and relying on a keyboard and a rack of 17 acoustic guitars, the 63-year-old delved far back into his catalogue for the sensitive singer/songwriter-type songs with which he has become synonymous. 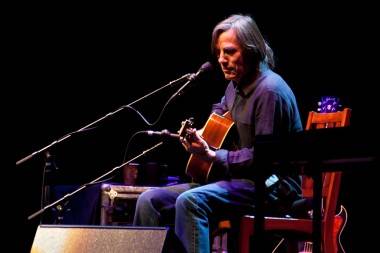 Back in the early to mid-70s, Browne was a songwriter with extraordinary potential (he even co-wrote, with Glenn Frey, “Take It Easy”, a song that would end up on The Eagles’ Greatest Hits, one of the best-selling album of all time. That alone means he’s never had to work a day in his life). Critical consensus names his 1974 album Late for the Sky, well-represented last night, as his masterpiece, though it was his 7x platinum-selling 1977 record Running on Empty that made him, briefly, a superstar.

That was the golden age of California rock, when compatriots like Linda Ronstadt, the Eagles and Fleetwood Mac were snorting countries of cocaine and selling millions of records. Like those acts, Browne has had a hard time adapting to changing musical winds and also reinvigorating his songwriting, and this was apparent from last night’s show, part of a tour that doesn’t seem to be promoting anything in particular. (His most recent album is a 2010 two-disc live set with guitarist David Lindley, Love is Strange.) 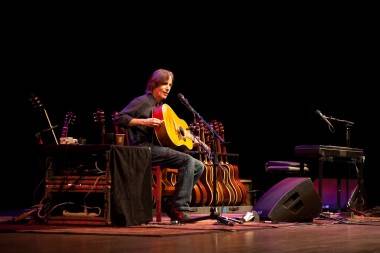 Heavy on the early material, light on recent songs, and whole albums (mostly from the ’90s) totally ignored, the two-hour-plus concert moved in fits and stops, with some melodic progressions and the overweening earnestness of Browne’s delivery and subject matter becoming slightly repetitious, especially in the first set. However, a few of the more politically charged songs – including “Lives in the Balance” (title track to Browne’s 1986 album) and a song about plastic waste (!) that segued into his classic “Rock Me On the Water” – livened things up.

There was something off about the sound in the Queen Elizabeth Theatre as well, at least for the first couple of songs, when Browne’s voice was so resonant and loud, discerning lyrics was difficult – a major setback when the songs clearly rely on the lyrics. 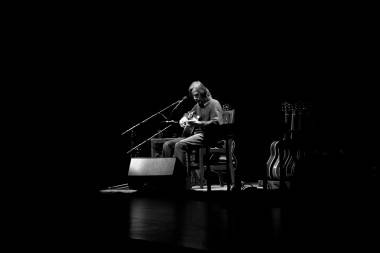 The second set, though, was a little more interesting, thanks in part to a couple of Warren Zevon covers (“Life’ll Kill Ya”, “Don’t Let Us Get Sick”) and Browne’s own “In the Shape of a Heart”, the latter at the request of the guy sitting in front of us. In fact, the whole evening was largely improvised, though the singer was determined to play some tunes, including “My Stunning Mystery Companion” (which he dedicated to his girlfriend who, according to the ever-reliable Wikipedia, is artist/environmental activist Dianna Cohen), just as there were songs (“Rosie”, from Running on Empty; the title track of his 1976 record The Pretender), that diehard Browne fans were determined to hear.

The only song this reviewer wanted to hear, though, was “Running On Empty” (well, maybe “That Girl Could Sing” from 1980’s Hold Out album, but that’s another story). It’s safe to say I’ve been waiting to hear this song live since I bought and endlessly played the 7″ single when I was a mere lad of 13. Even without a band to give it that extra muscle, the song – which closed the second set – sounded as thrillingly alive and gloriously rueful as it did back then, in 1978, when I thought the line “I don’t know when that road turned onto the road I’m on” was the most profound thing I’d ever heard. 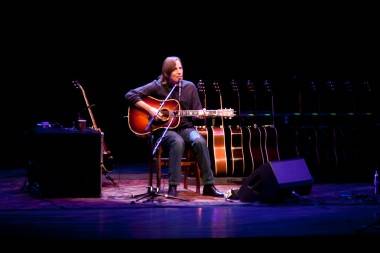 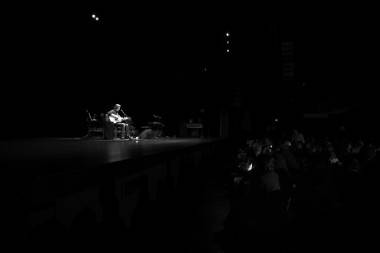