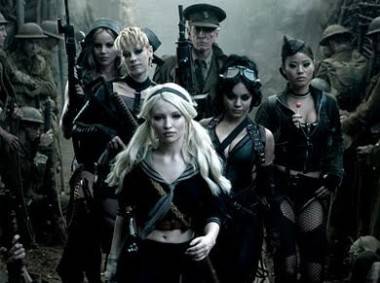 That cracking sound you hear is fingers limbering up across the globe to type out screeds defending Sucker Punch as some sort of ham-fisted shot across bow of misogyny or the logical perfect film for video game geeks. Zack Snyder’s latest has its virtues but metaphorical strength is not one of them. Essentially a series of loosely associated music videos, Sucker Punch is a stylish, ambitious, monumental failure.

Sucker Punch tells the story of Baby Doll (played by a near catatonic Emily Browning), a young woman who loses her mother and sister tragically, and is committed to an insane asylum by a devious stepfather angling for her mother’s estate. Suffering at the hands of asylum staff, she retreats into a dream world where shooting a Nazi zeppelin down with flying steampunk Gundam is par for the course. These fantasies are in turn the fantasy she has while working in a brothel. It’s meta, but for no good reason – One Flew Over The Cuckoos Nest via Inception without the quality that comparison suggests. 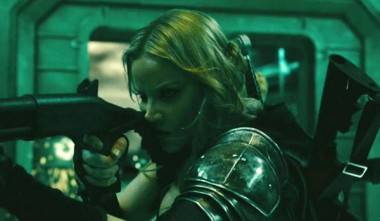 The film isn’t incomprehensible, but tries so hard to be incredible it fails to engage. So while Snyder assembled a bang-up cast including Vanessa Hudgens (Beastly, High School Musical), Abbie Cornish (Limitless, Candy, Bright Star) and Jena Malone (Donnie Darko, Saved!), as well as Watchmen alumn Carla Gugino, their utility is that of heavily armed Barbie dolls, their acting as stiff as their dialogue, sexless and effectively mute.

Snyder (300, Watchmen) would probably have found himself in movie jail by this time next week had he not already landed a gig directing the next Superman film. Sucker Punch is exactly what happens when a director with some success is allowed to do just about whatever the hell he wants with studio money and nobody around to say “no” to poor choices. It’s the Phantom Menace Effect.

A similar scenario played out with Richard Kelly (Donnie Darko) and his wannabe opus Southland Tales: like Snyder, Kelly’s reach exceeded his grasp, resulting in overindulgence, a tin-pot script, delusions of intellectualism and embarrassingly bad use of pop music to score their films (Venn diagramming at the Pixies). InÂ Sucker Punch, every shred of originality and achievement in art direction is nullified by emotionless execution. It features strippers with no sexuality, violence with no action and fiction’s first boring dragon.

Snyder still scores highly as a visual stylist, and his trademark (to the point of parody) slow-motion action scenes have been pared down in favor of some tighter close quarters action (done better by Edgar Wright in Scott Pilgrim). But Sucker Punch feels like a limp imitation of the forward thinking that made 300 so watchable.

Style is nice, but ignoring the basics makes for an excruciating experience.